Hi! The week is over, the Weekday Escape here!!

First two games - by New Generation Sustanable Energy Poltergeist and by midori are short but good and clever escapes from Japanese site Dasshutsu. Then comes robots' adventure by Neko Donut where you need to help a small robot to recharge his suddenly collapsed friend, and then you find yourself in Migilua's living room. The bonus is the latest tomoLaSiDo challenge, this time a room with objective lenses.

Escape from the Pixel Art Pin 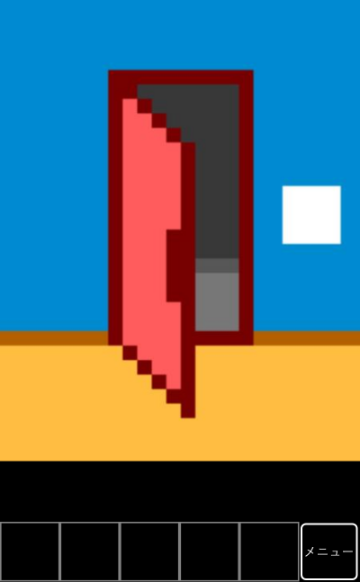 In New Generation Sustanable Energy Poltergeist's game you stand in front of the locked door. On the right side of it is a clue, and after you open it, there are nine more doors in front of you, no need to say that locked ones. Each code is a small puzzle and the difficulty slightly rises. A nice one.
The cursor isn't changing, save option, one ending. 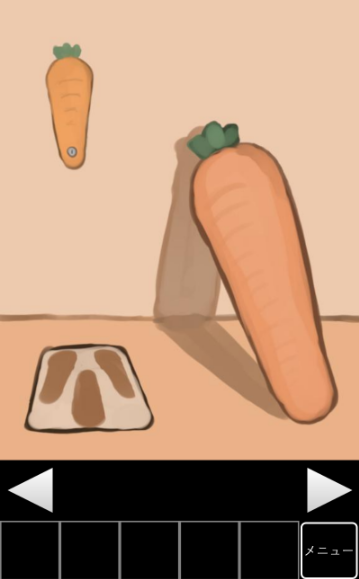 Short and sweet midori's escape involves carrots of various sizes and things which look like a carrot but they aren't. You can easily get through without understanding Japanese - just click everywhere and ignore the texts.
The cursor isn't changing, no save option, one ending.

In cute Neko Donut's small adventure a robot needs to revive his friend who's completely flat. Technically it's not a problem since they can charge one another, but our robot doesn't have enough energy even for himself. There is a recharge pad in the next room of the apartment, but also several switched off appliances which require energy to work...a lot of running around to get everything in order!
WASD/Arrow keys for moving around, Space bar for action, no save option, one (good) ending.

P.S The previous game by Neko Donut you find in WE N°290.

Migilua's second room is again simple and minimalist with good puzzles. It's well done standard escape room, the only possible difficulty you may encounter is (small) pixel hunting when you try to combine items in your inventory - so, if you try to put together two items and they won't join, try again to be sure. Your idea may be right.
The cursor isn't changing, autosave, one ending.

P.S The previous game by Migilua you find in WE N°284. 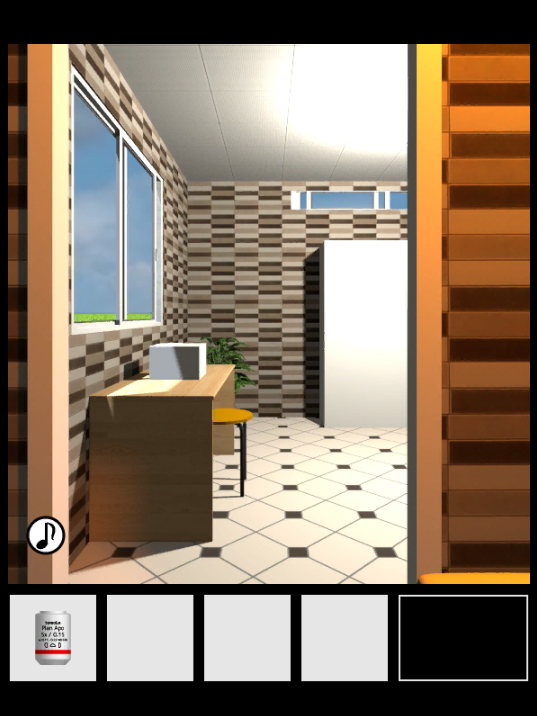 Bonus game is the latest tomoLaSiDo's Escape Challenge 145: Room with Objective Lenses - longer than usual - there are two room to explore - but also with some pixel hunting.

Lovot is not point and click...fyi

What a sweet game. I don't usually like non mouse games but this one was perfect.

Using objects is strange. I don't know why the click / hold and twist is becoming so popular. I don't think I can finish this game.

The "key" to open the safe, is impossible. I see the clue. I finally found a video walk through and still can't get it right.

I managed to finish it. Again the item manipulation was difficult for me. Some of the puzzles didn't make sense and I had to consult a video walk through several times.

Me too, I have reassembled it many times but it just doesn't work.

I'm lost on this one.

Cute little music tune but the game ... I'm just not getting it. I think maybe the text would have been nice.

There is some delay in the clicking and getting something to happen. Probably my computer as this happens in other games too.

I finally got the bucket to work on the sink. Open door to see the box with dirt. Put the bucket on the dirt and grow another carrot. Take this carrot to the cutting board and something happens. Pick up the carrot and put it on the plate in the opening scene.

So now I am wondering around with a carrot that doesn't go anywhere or do anything and I need a key to unlock carrot in opening screen. I assume I need to find a way to pick up the giant carrot to put in door. My guess is that the giant carrot is used last to escape.

Where is the key?

Any help would be nice. I wish I understood Japanese.

Apparently this is Midori's first game. There are No Hints or Walk Throughs for this game anywhere.

Still wondering around with a carrot.

I nearly gave up on the carrot room until I found

Keep walking and clicking on all the objects. Sometimes it takes a double click as well as clicking the Japanese textbox that pops up. Good luck!

Pick up the key in the shadow under the giant carrot.

Unlock the carrot-shaped decoration on the wall to obtain a normal carrot.

Go to the scene with a chair. A normal carrot is hidden on the hatstand.

Go to the scene with the sink. Take the worn-out carrot.

Go to the scene with a chair. Take the kitchen-knife-shaped carrot out of the pot. Also take the pot. Rest the worn-out carrot on the chair to make it no longer worn-out, and thus obtain a pristine small carrot.

Go back to the sink. Insert the small carrot into the slot below the sink. Turn on the faucet and fill the pot with water.

Go to the scene with the chop board. Open the door and go inside to find a planter with soil. Use the water-filled pot on the planter and a normal carrot will grow.

And you have three carrots

Go back to the scene with the giant carrot. Look at the three carrot slots on the floor to see that the slots have no space for carrot heads, unlike other slots in the room. (It is much easier to see this if you know Japanese, as it is said explicitly in the text.)

Use the kitchen-knife-shaped carrot on the chop board to cut off the heads of the three normal carrots. Then, go back and insert the headless carrots into the slots. The trapdoor will open, revealing a giant carrot inside.

Thank You Polsaris for the Walk Through!

Escape from the Pixel Art Pin

I got the first door but had to consult a walk through for the rest. That made no sense at all.

Not a fan of Escape From The Pixel Art Pin. How are you supposed to know on the tenth door

which numbers are supposed to be used? There are multiple numbers inside some of the figures, and the correct digits don't appear to correspond to size, position, or any other obvious identifier. Got through that one by brute-forcing my way through all the possibilities, and that's not an enjoyable process.

On a side note, I wish developers would chill with the pixel art. I've seen a lot of games lately where the pixel art makes the game difficult to play (such as by obscuring clues in last week's Haunted Room Escape and Yabatanien from a few months back). If it has a valid purpose, fine—there was a delightful game from last year (?) where the art became progressively more clear as you discovered how things worked. Great dynamic, and it was a lot of fun. But pixel art just because it's the latest fad? Come on, devs—knock it off.

There's actually a hint button in Escape Room With Carrots when you open the menu, but (assuming Google Translate is correct) it instructs you to install the app—no hints in the browser version, apparently. You can play this despite the language barrier, but knowing what all that Japanese text says makes things much easier.

I am curious, however, why the text for the carrot-shaped depression under the sink was initially translated by Google as "the penis is too small"… 🤨

I really liked Escape From The Pixel Art Pin.

Was almost able to make it all the way through, but had to seek assistance for the last one.

I was most proud for figuring out door 10. There is actually a method to the madness for that one ...

Yes, the numbers are sized and proportioned a bit weirdly.

But if you look closely, you should be able to spot three separate numbers of different sizes (not necessarily single-digit) for each of the four clues you have to figure out.

The second digit clue was the hardest for me to spot because of the odd proportion in one of the figures in particular. I thought the third clue was the easiest to spot the pattern.

Explanation of solution below.

The site LOVOT is hosted on is being rather obnoxious for me. The first time I pressed the space bar to start the game, it shot halfway down the page—apparently it doesn't give focus to the game canvas. Scrolled back up, clicked on the game to give it focus, and tried again. This time I got the initial scene of the robot, but the first keystroke caused the entire site page to disappear. Argh.

If you're also having trouble, try using this link to launch the game. Might give you less headache!

Ah, now that makes sense. Rather obtuse for a clue, but at least there was method to what seemed madness. Thanks for that, stuckinabasement!

Really enjoyed Betta Room! I had no problems at all with the inventory, but did have a bit of trouble getting

the cabinet sunk in the floor to rise up.

Other than that, the game ran smoothly and the 3D controls were responsive and easy to use. (After the dreadful controls of Escape From The Dam Facility, this was actually fun to fiddle with.)

If anyone else is wondering what those "Plan APO" things are in Escape Challenge 145: Room With Objective Lenses, they are planar apochromat lenses, the barrel parts on microscopes that provide magnification. I thought they were cans of some kind of Japanese soda until I looked up what that meant! 😄

You are probably thinking about Pixel Room by Kotorinosu.

And Yabatanien's problem goes much further than pixel art, I would say. I wanted to write a text walkthrough for that, but as I tested on the game mechanics, I realized how illogical the game was, and I gave up the project.

Yes, that was Pixel Room I was thinking of. Thanks for coming up with that title—I'd like to play that one again!

(Has it really been around for eight years? 😲)

Oh nooooooooooo! Kotorinosu has "closed" several of the older games, including Pixel Room!

But some of us still have Flash Player installed so we can enjoy those old rooms! 😢 💔