Another week is over and a new Weekday Escape arrived!

This week we have another opportunity to enjoy highbman's style of creating. After them comes Migiula's simple escape from experienced devs who were known earlier as Puxupo - and then with Icyoak you set up for a journey into snowy woods. Neat Escape locks you up in a small guest apartment with hidden two escape routes.

Escape from the Laboratory 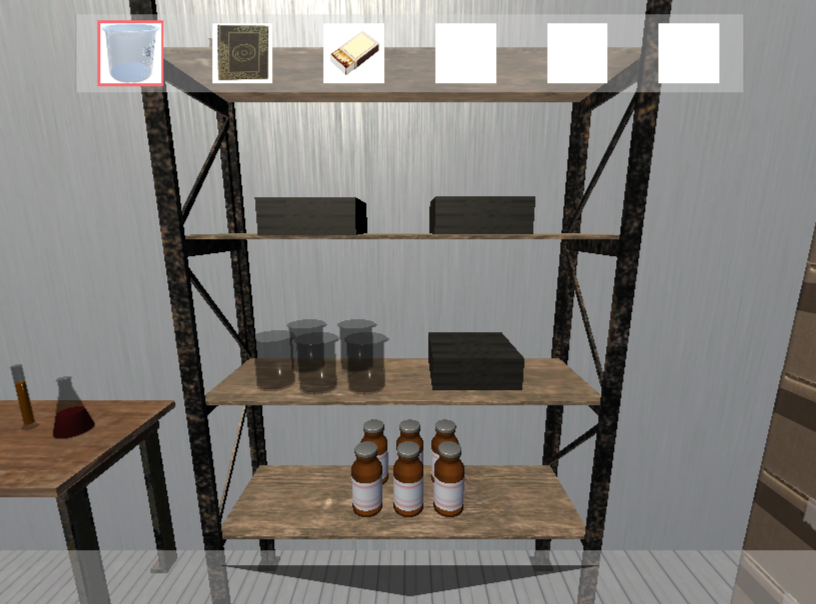 The first game by highbman we got before Christmas and now they are back with another great escape. This time you ended up locked in not very high-tech laboratory where you are supposed to get the door code - and on your way through work some chemistry magic! There is something very satisfying about the way the devs construct puzzles - the small twist makes them refreshingly original and reminds of the quality games which were common not so long ago.

The cursor isn't changing, no save, one ending. Don't worry about Japanese texts. Just ignore them. You are a brave escaper and you can do it without them!

Migilua (earlier Puxupo) haven't changed much - the clean graphics style is easily recognisable and the small bell's sound as well. You are trapped in a room and you want to get out of there...can you?

In Icyoak's game you aren't escaping - in their short point and click adventure you need to get a tree. Before you can go outside to the woods, you should get proper winter clothing. It's freezing out there. If you decide to go out without it, your strong and loyal cat Theodor later drags your frozen body inside and let it defroze by the fireplace...so you can start again, wiser for experience. Getting a tree isn't as easy as it may seem (even in warm clothes) - outside are more puzzles waiting to be solved!

The cursor isn't changing, no save button, one ending.

Escape from the Attic

You woke up in a cosy guest room in Neat Escape's friend house and almost immediately find out that they trapped you. Oh well. It's obviously escape time so don't bother to try to get someone's help and help yourself instead - just start to look for clues and items and try to open everything. As usual, there are two endings which depend on using one key. Warning - the second ending is for nimble and sporty players only who aren't afraid of heights. The escape route leads through a window and remember, it's an attic you're escaping from!

looking forward to the walkthroughs for these.

whale room is fairly easy, but frustrating because the background has the same items you need to escape, but are not collectible.

As Icy Oak is one of the games here, i checked and there have been 2 Icy Oak games in here before and neither one have walkthroughs. I hope someone can fix that.

Click on the left & right side of pipes on each wall to change view and see input pattern (The red rings on pipes).

Use paper on the "spilled liquid" on (desk next to filled vial & flask). Look at paper again for code.

The book has clue and be aware that the key you have is currently unusable due to rust.
Also steps need to be performed in a very specific order.

Fill beaker with water.
Use eye dropper on flask full of red liquid on desk.
Use eye dropped on beaker.
Use key on beaker.
Put beaker on Bunsen burner and ignite it with matches.
Take beaker & use it on sink to get clean key.
Unlock box.

You can change the color of eye dropper.
When you get the code, pay attention to the symbol on cover of book and the fact the keypad colors are ordered differently.

The code in book is upside down so enter: 691E

Hi Paul. Icyoak's games don't have walkthroughs since there are very good text ones on their page. Here is Winter Tale walktrough.

380 Views
0 Comments
chrpa— Jayisgames really needs your help to continue providing quality content. Click for details In Auroriax's (Tom Hermans) puzzle game you are struggling to get through huge traffic mess. Cars, buses and trucks are unable to move at all, and you...  ...

577 Views
4 Comments
chrpa— Jayisgames really needs your help to continue providing quality content. Click for details Water everywhere this week. In Laerte Junior's you can squeeze as much liquid as you need from the tip of your cursor to move your boat....  ...

1,037 Views
16 Comments
chrpa— Jayisgames really needs your help to continue providing quality content. Click for details We are in the middle of the week and that means a new Wekday Escape! Gotmail's escape doesn't take long so you can move in a...  ...