Neko Donut let you explore the set of nine tiny rooms - each with own soundtrack! - and find out what you can be done in each one. Jim-Ar's short escape follows, and then you get locked by tomoLaSiDo in their room - well technically you can escape it right at the beginning through the French window but that's not what you're supposed to do, right? In large Neat Escape's garage are loads of puzzles to solve and two emergency exits. Much fun. Bonus game by Dassyutu.

Rooms in Neko Donut's game are stacked into each other like matryoshka dolls and you can move between them with up and down cursor keys. Your cute white blob can pick up items, carry them around on his head and use them - or just leave them wherever you want before you figure out what are they for. Your goal is to get the key and escape, of course, and maybe return later and play again. The level of cuteness is high indeed.
Controlled by cursor keys (moving around) and space bar (interact with items). 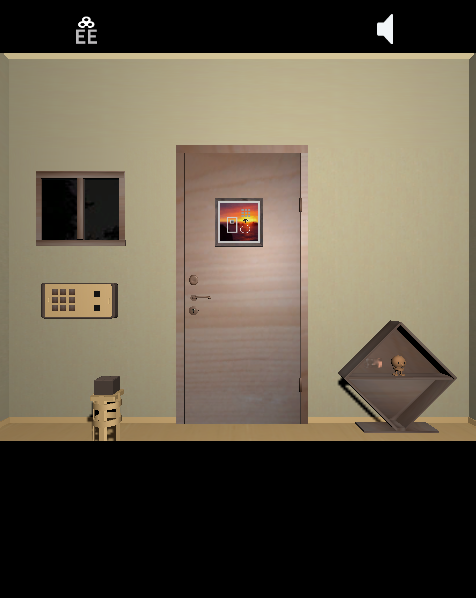 One scene Jim-Ar's game very well done again. Puzzles are only three but so cleverly constucted that you may spend more time to figure out them than expected...
The cursor isn't changing, no save option, one ending. 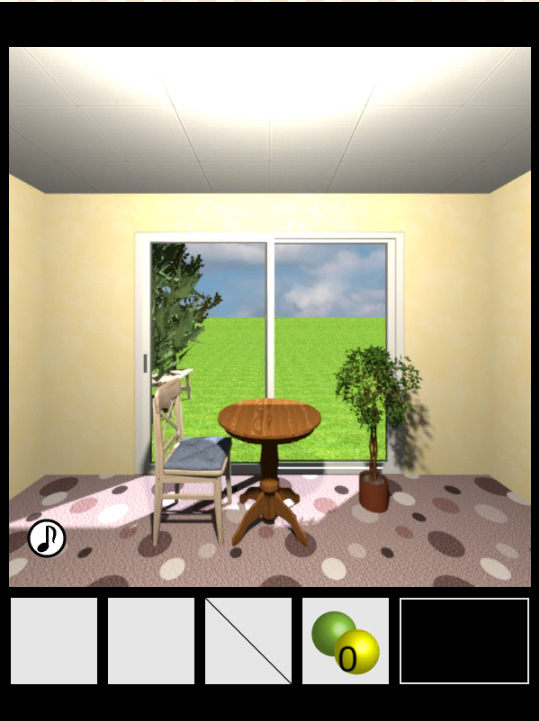 The green and yellow balls you keep finding in the locked living room are pollen balls, rather big and sticky, and you need to find fifteen of those to fulfill the side task. As usual, puzzles vary from very easy ones to...hmm...to not so easy ones in typical tomoLaSiDo's way. No language barrier. Also a new melancholic soundtrack.
The cursor isn't changing, no save option, one ending.

This time you get trapped in Neat Escape's luxurious garage. You came here to admire your friend's new car, and involuntarily stayed much longer. It's well spend time, though. There are loads of puzzles, well constructed and entertaining, and the gameplay flows smoothly. Both endings worth playing so don't forget to save your game before using the blue key. And don't touch the water in the pot. It's boiling! Ouch.

The cursor isn't changing, autosave plus save option, two endings.

Bonus game: Escape from Tunnel is the latest escape by Dassyutu. A bit awkward controls.

Re: the Dassyutu game...a mouse roll lets you zoom in and slow down. I just can't figure out how to find and use inventory

can't wait for the walkthroughs to these.

LOL! A scene in Room reminded me of a silly joke:

Q: What do you get when you goose a ghost?

A: A handful of sheet.

This game was a bit brief, but quite fun!

If you're having trouble with the left keypad in Miniature2:

The base of the diamond-shaped rack is represented with only a single key, not three.

I loved ROOM, even though it was so brief - what a great new escape concept.

ROOM was very cute! was there a use for

take it to the light blue room

put it on the window sill

good snail brings you a mushroom!