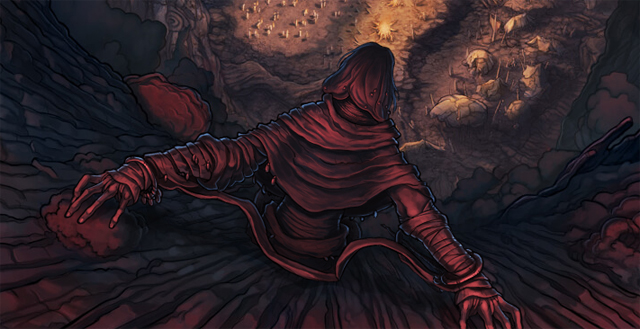 Bearing the fruit of thoughtful craftsmanship, Rudowski Brothers gifts us with The Trader of Stories - Chapter 2. After spending nearly a Blossoming in the human city of Bark, Little Willow's life seems fairly ordered. She works as a waitress and storyteller in Gofung's teashop, has acquaintances - if not friends - and generally makes do. But amnesia still bothers her, alongside an odd sense of not belonging. Until one day, a tall, dark, and mysterious guest arrives. Will she find the answers she seeks, or will trouble find her first?

For the newcomers to this series: while Chapter 2 is indeed enjoyable as a standalone game, it follows an intricate storyline that is most comprehensively appreciated when its predecessors are played first. This installment of the Big Old Tree that Dreams series follows Bell's Heart; A Grain of Truth; and Chapter One. A useful feature of Chapter Two is that it's mobile-friendly.

The first impression and immediate draw of this game is its gorgeous art. The Trader of Stories transports us to places one can't even dream. Animations are detailed and riveting for every scene, including for specific characters, who are visually consistent with their personalities and backgrounds. An individual's motivations or demeanor can be clearly conveyed through color dynamics, clothing style, and bodily posture. Even the objects shown in Little Willow's inventory are on-theme, which is a unique aspect of this series. The Trader of Stories calms yet compels through its animation and music.

When it comes to gameplay, this series as a whole can be characterized by its interactive art, with elements of "choose your own adventure" and a sprinkling of logic puzzles. The heart and soul of Chapter 2 lies in its interesting, complex, and detailed characters, as well as how Little Willow's narrative melds with theirs. Most of the storyline is propelled through interactions with the humans of Bark. There exists a rich web of relationships between characters and the history of locations within the Big Old Tree world. Chapter 2 revisits scenes and individuals from the previous chapter, for reasons apparent to longtime players. Fair warning - as the plot thickens and players encounter more information, the story becomes more complicated and difficult to follow than in the past. The addition of protagonists and storylines may present a challenge for some players to track. If anything, additional hints, mnemonics, or organizational tools to help remember who's who and why that's important would be helpful. As is the modus operandi for The Trader of Stories, this game requires ample patience to sift through loads of dialogue. Copious text is a necessary part of the game, so it is recommended that players be prepared and in the right mindset.

Chapter 2 implements some highly thoughtful features to guide players. Throughout the game, hints have been placed within dialogue to help players determine whether they are following the right path. At times, the volume of dialogue makes it difficult to tease out clear goals and objectives. As such, indications like "No, it's not time to leave yet;" "You should go to --this location--;' or "This item is no longer needed" are huge timesavers when options are aplenty. For the occasional logic puzzle that becomes hard to solve, the dialogue presents an opportunity to skip it. Fortunately, for the most part, this choice does not alter the gaming experience. In addition, the bottom right corner of the game includes an "eye" feature that is immensely helpful in determining clickable points within a scene, which is especially valuable since many in-game objects look different from everyday objects on Earth. The level of thoughtfulness put into the player experience is impressive. If anything, one point to raise is that the implemented point-and-click method is a bit cumbersome for navigation and some of the puzzles. For example, the game would be more streamlined and efficient if doors and other locations required just a single click instead of multiple.

Whether you're starting this series from the beginning or have eagerly awaited this update, The Trader of Stories: Chapter Two is a vast adventure great for these quarantine times.

Play The Trader of Stories - Chapter 2

Hey. Is it possible to add a few endings? If so, then it would be nice to choose the ending.

Even so ... those kids in the later parts - the ultra-hyper, nigh-impenetrable Cockney accent/slang salad gets to be headache-inducing rather quickly.

Adored the game. I went back and played the previous 3 chapters before starting this one, and this really is a lovely series (also brought me back to the days when a new pastel game would drop once or twice a year).

As with all the installations, it's as much about the story as it is the game-play, and the game-play does include a few awkward spots. Most of the puzzles are really well-designed to teach you how to solve them, but a couple (the liquid in beakers, esp.), I found a bit counterintuitive.

The games have got so long, and the design is so exquisite on so many fronts, I imagine it'll be another 3 years before we get the next chapter, but I hope not!

Great game, I played it for a few hours and it kept me busy :)

A useful feature of Chapter Two is that it's mobile-friendly. The first impression and immediate draw of this game is its gorgeous art.

Thanks for Sharing this..