With Selfdefiant we briefly visit Arkansas and California, and with tomoLaSiDo their standard tiled apartment. Then comes very long and original escape by recyclable garbage - the walkthrough lasts almost twenty minutes - and it takes a lot of thinking and combining to get through!

After you've escaped Alaska (WE N°312), and Alabama and Arizona (WE N°314), Selfdefiant took you to Arkansas and again, you have to find your way out on your own. Most important task appears to be to feed a racoon - it's not greedy, three acorns would do. Happy racoon will give you a key, then.
The cursor is changing, autosave, one ending.

The Selfdefiant's tour around U.S. states continues in alphabetical order and you get trapped in California now. Apparently, you can escape by a streetcar but first you need to get a ticket, and it's a very expensive one - it costs three pretty big rubies!
The cursor is changing, autosave, one ending. 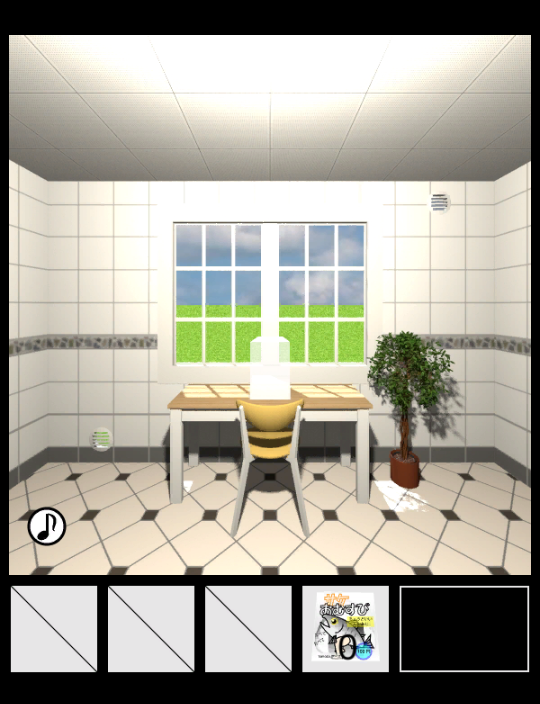 In tomoLaSiDo's tiled room are hidden twelve packets containing salmon rice balls and as usual, six capsules containing key parts. Puzzles are not difficult and without language barrier, but some hotspots are well hidden indeed so it may take a while to find them.
The cursor isn't changing, no save option, one ending.

I Want to Play an Escape Game 2

The sequel of I Want to Play an Escape Game by recyclable garbage is much longer then its first part (WE N°312), more difficult, and very clever. You can find a walkthrough on YT on channels EscapeGameWalkthrough or Cerkill's.

There is a language barrier in the game but majority of puzzles are understandable - the biggest problem could be four lines of text which appear on the wall above a door in the first room when you switch off lights. The first and the second line is in Japanese but you aren't supposed to understand - what the game wants from you is to count up the number of closed shapes in each line.

The Tomolosido write-up is on-point; there are a few hotspots that take a bit of clicking. If you can't figure out what to do with a puzzle, keep that in mind!

Two and a half hours into I Want To Play An Escape Game 2, I was about ready to pull my hair out. The language barrier is more than slight here—I don't know how anyone can complete this game without translation. I certainly would never have known what…

…the ink stone (?) and bottle of India ink were.

If you're trying for both endings, the Menu is the button in the bottom right corner, and the Save is the top option in the menu. Resume From Save is the third option.If you can't restore from your save, do not close your browser! There is a glitch in the game, and when I went to restore my save to try for End 2, the option to restore from the save was greyed out. (And yes, I cursed quite loudly indeed.) If this happens to you, just do a reload on the browser window. You'll have to load the game again and start a new game. But once in the game, the Resume From Save option should become available in the Menu.

And you better know your geometry for the 213 puzzle on the right desk drawer.

The solution is the number of sides on the three standing signs you find. The developer is indeed correct that a circle has zero sides (it isn't a polygon), but this is the first escape game I've ever seen that got that right. The misconception that a circle has a single side is quite a popular error.

In Hooda Escape Arkansas I can't pick up the

and therefore can't complete the game.

This comment is hilarious!
Mainly because I had a very similar experience.

I managed to get out without translation.
chrpa's hint about counting the closed shapes was the only thing I didn't get on my own. Would never have thought of that in a million years.

With that said, the only reason I made it through was because I tried combining EVERYTHING coming down to the end.

I only managed the one ending. I left with

a calligraphy brush that had been dipped in ink

so I assume that I could have used that to get to Ending 2. Except that I too was unable to restore.

Not sure I have to gusto to go back in just yet.

Was a good brain workout though.

1,831 Views
0 Comments
jayisgames.com— Some video games are incredible, but they don't get the rating or attention they deserve. Here's a list of the top underrated video games worth your attention.  ...