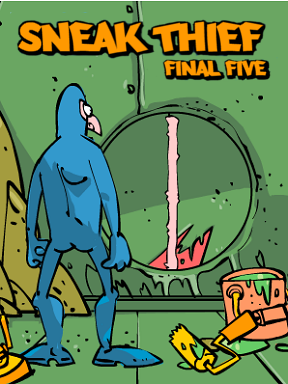 The long-nosed thief gets out of high-flying situation and falls, rather glides, into Sneak Thief 5: Final Five, the fifth and final installment of the Sneak Thief series. The man's adventures have gotten him stuck inside a mechanical fish, packed in a horde of his clones, and dodging robot laser attacks on a hot air balloon! His antics and mishaps have landed him into more trouble than he probably bargained for. As the persistent pilferer finally arrives at Prof. Belamy's doorstep via his handy-dandy glider, he is probably looking forward to getting this job over with. With the final invention waiting inside the compound, you know Pastel Game's cunning and comically ingenious criminal will stop at nothing to finish the figh... I mean job. Also, when did he have time to change into a blue jumpsuit after his daring free-fall escape?

The formula hasn't changed and remains true to the point-and-click adventure gameplay. You and your mouse will scan across every nook and cranny to grab up any items by clicking on them. Using your keen intellect, you will use and combine the items you come across to solve puzzles to snag the professor's final blueprint. Some items combine in rather...interesting ways so exploration and creative often times rewards players. You thought microwaving a frozen brain was weird then be ready to create a unique "battery".

This game ends the series on a good note that makes both you and the thief glad that you stuck it out to the very end of the job. The art style and animations done by Kamil Kochanski are top notch, as they always have been, and make exploring the environment even more rewarding. The game's approximate fifteen minute or so clear time is a standard for the series, but will get you smiling for the rest of the day just by clicking around the screen. If you are a follower of the Sneak Thief's escapades or are just looking for a nice, quick adventure series then look no further. Just don't ruin the story line for yourself by playing this one first. It will be well worth your time when you finally see the thief's mission all come together.

Main Atrium
(Do not worry about entering the door located to the room's right side. Needed later.)

Chemistry Lab
(You will use the room on the left once you get the blueprints so skip that room for now.)

Right Side Door after Puzzle Door

Left Side Door after the Puzzle Door

Right Side Door in the Main Atrium

Combine the frog and the battery. Put the electrified frog in the jar.

End of the Game

chunk of coal in the vice, but I cannot use the hammer on the coal, nor can I remove the coal from the vice. I have a boxing glove, coffee cup, hammer, wind-up mouse with key, bucket of coal, coffee bean, and the "battery".

Anyone know what I need to do?

use the hammer on the left side of the vice where the turn handle is. It will tighten further into a diamond.

Ah hah! Cue the "Why didn't I think of that?" face-palm. Thanks, Bryan!

No problem man. I am working on the walkthrough for this now if you have more problems

Main Atrium
(Do not worry about entering the door located to the room's right side. Needed later.)

Chemistry Lab
(You will use the room on the left once you get the blueprints so skip that room for now.)

Right Side Door after Puzzle Door

Left Side Door after the Puzzle Door

Right Side Door in the Main Atrium

Combine the frog and the battery. Put the electrified frog in the jar.

End of the Game

*sigh* Even Coolbuddy resorts to cheap preloaders which has a fake download and play button.
Why PastelGames?

One bit of logic failure I had to contend with...

why couldn't we just use the hammer to smash the glass?

Other than that, though, a solid end to the series. Nicely done!

One last question, though:

Sneak Thief, if you would do all that for a cup of coffee, I just have to know...

What would you do for a Klondike bar?

It might not be glass, which would explain why you'd need something as hard as a diamond to cut through it.

Of course, I tried the more direct approach, too ;)

Puzzle door does not appear to be unlockable if you're using a trackpad. Grrrrrrrrr.....

@Carny: I don't know what you're talking about. I have a trackpad and I got it open just fine.

I'm using a mouse and I can't get the door to open, my PastelGames loving friends are trying this too.

What version of your browser and Flash Player are you using? That might be a Flash Player version issue. Try a different browser (try the latest Chrome to be sure you're getting the latest) or try updating your Flash Player.

I doubt it, Redmug. Perhaps an extensions conflict.

We have tried it here at JIG studios on both Mac and Windows in all the major browsers (IE, Firefox, Chrome, and Safari) and were unable to reproduce the issue.

Turned off all extensions, no change.

I don't know what else to suggest other than empty your browser cache and reload the game page. Perhaps your initial download got corrupted somehow. We cannot reproduce the issue. For everyone here who has tested it, we click on the left (or right) button and then on the button on the opposite side, quickly before the first button makes a complete circle, and the door opens each and every time.

Cleared everything, but somehow it still doesn't work :(
But there's one oddity I forgot to mention: on my first play and after clearing the cache when I combine the gun with the battery, the gun auto-assembles itself with the paint-roller.

That happened to me to (re: multi items combining) depending on what I dragged where.

Sorry to give you guys a hard time but I've tried all the browsers, Coolbuddy doesn't seem safe and any other computer doesn't work.

Ok, when you said "I'm using a mouse and I can't get the door to open", can you describe exactly what you're doing and exactly what is happening in the game? Please be as specific and detailed as possible. I want to be sure I haven't misunderstood the problem you're having.

In fact, if you want to email me at our contact address we can take this conversation offline.

Just stating that the door problem is not limited to trackpads as stated in previous posts.
Just started, grabbed the items, combined them (with the oddity stated previously where all three combine), used the result on the door, nothing happens :(

Are you clicking on the

4-piece drill combo first so it's selected, and then clicking on the door?

The references to the trackpad in earlier comments are for a different door. There is a later door that requires you to quickly press two timed buttons, and players with a trackpad might experience a little more difficulty reaching those buttons in time.

In your case, I would suggest not collecting all of the items at the same time. Rather, pick them up and then combine them one at a time. Try doing it in the following order:

If you're able to complete the drill with all four of the item parts, you should be able to open the door.

Oh, that explains why Jay said "puzzle door".
But thank you so much Trinn, I was missing the fourth part.

[Ah-ha! Glad you got it working. Thanks for being so patient :) - Trinn]