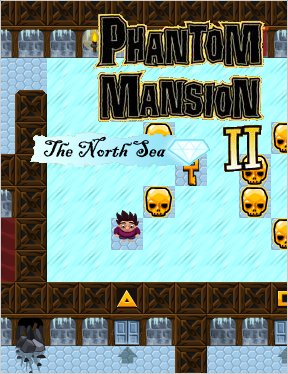 Aaaarrrrr you ready to push some crates and unlock millions of doors, matey? Phantom Mansion 2: The North Sea, the next installment in the pirate-themed Phantom Mansion II series, is here to satisfy your need to steal from the dead. This one has lots of ice, because it's about the North Sea. In the North. Where they keep the ice. That means you often get to sit back and watch Hector skate around helplessly, in between avoiding ghosts. I'm looking forward to the South Sea episode, where Hector will sit on the beach sipping Mai Tais, in between avoiding sunburns.

Yay! What a nice holiday goodie. If only I weren't too sleepy-headed to play much of it. I'll have to tackle this again in the morning.

Can anyone explain to me how Level 5 (Sticky Boxes) isn't impossible? I'm hoping that by posting this I'll go back to the game and figure it out, but for now it has me stumped. I can only see one box I can get to (in round key room) but I can't for the life of me figure out how to get it out of the room without falling into the abyss.

Okay, it worked. I went back to the game and entered the next room where I was reminded what a

raft looked like. Now that room is a whole lot easier.

won't load for me. keep getting a bluish gray screen. Hope it works soon...

Yeah, unfortunately, Gimme5games has decided to use an overlay, so we can't link directly to a game page.

And the overlay doesn't work with every browser configuration. In Camino (Mac), I get a bizarre flashing blue rectangle over top of the game window making the game virtually unplayable. But I don't get that in Firefox.

So, my best advice is try a different browser, maybe you'll have better luck.

Thanks, Jay. I think my problem had something to do with the ads, though, cause I could see the gimme 5 hand for a sec, then the ad would load and when the game was ready the screen went blue. Anyways, I don't have that problem and am now waiting to "youtube it" :)

Thanks for trying to help, though.

Any tips on Ice Dance?

I can't get it to work on Safari, Firefox or Opera. Shame really. I've liked the rest of the series and was looking forward to playing this one.

Never mind. Got it. If anyone needs help on Straight Forward you:

Ignore the key, locked door and raft. All three skulls on the ice can be got without them. There's a flat fall in the middle of the ice. Push each crate to it, go to the path on the left, and then push the block over to the right into the water. Do this three times and you can use the third crate to push the switch.

"There's a flat fall in the middle of the ice."

shuffledog, can you elaborate on what you mean by flat fall? Also how do you get the skull next to the locked door on ice? thanks

Flat fall. I fail at typing. I mean there is a flat WALL. Something you can push a block against and it will stay.

duh, sorry i didnt think of that. Now I get it. I fail at interpreting typos!!

Hmmm, having problems with The Box Stops Here and Tricky. Any suggestions on either of those?

I never really understood why people find this glorified Sokoban so fun and engaging.

I am stuck on:

I am stuck on Ghosts Gone Wild
And on tricky I can get everything except the box to go where it needs to be, I can get it across the island and to the middle and to the other side, which I am not sure if it is supposed to be there and that is it.

The box stops here:
First off read the sign, that is how I figured it out.

Can anyone help me out with The Race please? This ones a lot harder than the previous PM games!

lol, baba. it is kinda weird, isn't it? Kinda like "why are people still playing and making escape the room games?", but thats probably just me.

Let me know if anyone figures out how to beat the next-to-last level.

Never mind! Figured it out.

Once I realized you didn't need to sacrifice one box to get the others to the island with the tree, it was a breeze.

Hi there, can anyone help out, I'm stuck on The Race, and was wondering on the box stops here if

there is a way to get two boxes so you can use one as a sheild for the bit with all the arrows!!

Marie, read the last part of my walkthrough on the box stops here. There are many spots that you can stop without getting hit by an arrow. Then you just run for it. No need for a box.

For some reason, I can't figure out how to get the ghost to the switch in Creepy Carry, despite having read the signs.

I can't see how to get it in the water, when I can't go in the water myself, and the boxes only go so far.

Yeah, I can't seem to solve creepy carry either.

I have to use both boxes to set off the switch and then have nothing to get the key with.

Okay, Tricky is killing me. I can get a single crate out of the island area, but then where do I put it? I can't figure out how/where to put it on some hidden switch like the hint suggests.

I swear to god the easiest way to get help on a puzzle is to ask for help on these forums. I'd been working on Tricky off and on for a couple hours tonight before I posted at 1:08amPST, just a few minutes later I solved the puzzle.

Username, since you seemed to have solved Tricky, it would be great if you could tell us how to solve Tricky

look at what direction the ghost is walking. Move the boxes next to the wall with the red switch, so you don't have to push the boxes in the water, but the ghost walks circles around the boxes (and the wall is you put them close enough).

SHA, as much as I would love to post a walkthrough for Tricky, I think it would be a lot easier if I could just do a vid capture. There's a LOT of moves required, I'll see if I can type it out but first I wanna finish the game.

Yaay! I finally did it! Man, Ghosts Gone Wild seemed like an impossibility! Great game, can't wait for the next one!

just still trying to figure out tricky...any tips where to put the box?

Can anyone help me with crash (North Sea)

Nevermind on crash. I figured it out. Thanks

Would you be so kind to share how you got through Crash? It seems like it should be simple, but I'm stuck.

Stuck on "the race" and "the box stops here".
Please help!

Nevermind I figured it out.

Basically the box is to get the ghosts to go into the left room so they can trigger the switch that is through that opening at the bottom that can only be reached by water. You see this area when you first activate the switch. The switch is in the upper right room.
The best spot for the box is against the wall one spot below the entrance, then if you do not get to the switch fast enough you can wait for a ghost to go there again.
QUICKLY: when you are in the room with the switch you will see the wall to your left open, Quick move off the switch, the ghost is now trapped. Now you can leave.

Hey!! can anyone help me with doorjamb? I'm stuck..

any hints on crash?

I'm going to doubt the power of posting is going to help me, so anyone want to give me a hint on The Race? I can't get past that first ice pond

AUUGGHH!! On Leftovers and I can't beat it. Looked at walkthrough on youtube and noticed that I have 2 trees in triangle and square rooms right in front of the door, preventing me from getting the box I need. Those trees are not in the walkthrough. Has anyone else had this problem?

Mars - if you still need it on the new Leftovers:

As the note on the wall says, you don't need all of the skulls. Get the

key. From there you can get all the skulls you need and leave some behind.