It doesn't matter who you are, finding bloody threats and arcane symbols scrawled on the wall like Lovecraft had a fingerpainting class is a little unnerving. You're escorting actress Norma Shine home late one night after the police have been unable to track down who's been leaving her these red missives when an apparition makes you crash, and you awaken just in time to see her being hauled off by a mysterious figure into the Blackrow District. Which, by the way, has been quarantined for almost two hundred years after the plague ripped through it. You know, just to complete your round of Bad Omens Bingo with a win. In Elephant Games' Mystery Trackers: Blackrow's Secret, the latest installment of the popular hidden-object horror thriller adventure series, you'll need to discover what grim truth is behind the darkness of Blackrow, a place that hasn't seen the light of day in centuries but is by no means "empty". Together with your faithful yap-yap dog Elf, who can be used to reach things you can't, and an unstable device that can allow you to see the memories of those long dead, you'll find items, solve puzzles, and maybe think of changing careers to something that involves a bit less mortal peril, corpses, and possession. 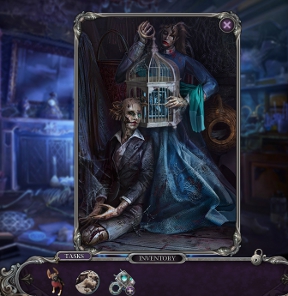 I always get a little excited when I see any Elephant Games title, but the Mystery Trackers series is one you can always count on to deliver the goods in story, presentation, and gameplay. Like its predecessors, Blackrow's Secret suffers from an egregious amount of backtracking, but offers up a genuinely interesting, if melodramatic, story that unfolds over some gorgeous and deliciously creepy areas. The artwork here is beautiful in every regard, enlivening some familiar puzzle types with rich design and detail, and the cutscenes are both well voiced and frequent as you use your magical memory MacGuffin machine to learn more about the past. It's not something you'd call scary, and it's considerably more restrained from some of the more flamboyant stories other games in the series have served up, but its still creative and full of twists and turns. ... and, admittedly, bad decisions. I don't know how you're supposed to feel sorry for someone who decides to go to the "forbidden district" alone, at night, after receiving a letter from a hulking hooded man. I know we don't all have Spidey Sense, but come on. Things get serious around the second half, and it's actually a pleasant surprise to have a villain who's somewhat sympathetic... you may not agree with their actions, but it's hard to deny their motives. 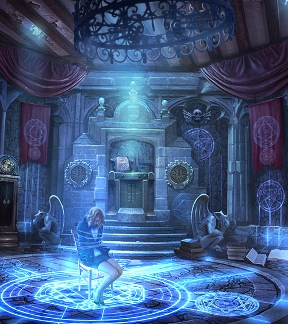 At the same time, however, Blackrow's Secret does feel like it could have used a bit more of the wild flair of Mystery Trackers: Raincliff or Mystery Trackers: The Void, because as well made as it is, its quality of design is the only thing really making it stand out from the pack. Which admittedly is a strange complaint, but the Mystery Trackers series has always been at its best when it really let loose with its plot, and there's just something about Blackrow's Secret that seems, well, tamer. It also feels as if it's a little on the easy side regardless of the difficulty you choose, so players will likely find themselves zipping through it in a few hours, not counting the bonus chapter. This is a game you'll want to finish all in one sitting, and you'll want more of it when it's over, and some seriously cool scenes and events will keep you hooked for the duration. Crazy zombie demon cats? Psychotic ghost twins? Bodies stuffed into every possible crack and crevice? Mystery Trackers: Blackrow's Secret isn't just gorgeous... it's a good time to boot.

> Dora— After three well-known, eccentric public figures go missing inside an old house with a bad reputation, it's up to you to find out what happened to them. Easier said than done, since this is Void mansion, and there are more secrets, and more surprises, hidden within its walls and beyond than you could ever imagine. A remarkably creative and tremendously fun hidden-object adventure game that is definitely worth a look.  ...

> Dora— Mystery is afoot in the snow-logged town of Raincliff! When a busload of university students goes missing nearby, the locals aren't talking... mainly because there aren't any. The town has been deserted for years and nobody knows why, and when you go looking for answers, it's clear that something doesn't want you around and will go to any lengths to keep you from playing the hero. Uncover a bizarre secret, stay one step ahead of a murderous unseen force, and search for clues in this exciting, imaginative installment in the fantastic Mystery Trackers hidden-object adventure series!  ...

> Dora— When a reporter vanishes while she and her cameraman are investigating the notorious though supposedly deserted Black Isle, as a member of the detective agency Mystery Trackers, you find yourself called in to find her. But before long you'll discover this is more than just a simple missing persons case, and you'll get wrapped up in a big paranormal conspiracy that might just be the death of you unless you can get to the bottom of the mystery. A stellar hidden-object adventure that delivers campy drama and originality, lots of cinematics, and one big, enjoyable game.  ...

> Dora— The town of Brightfield is under siege by bizarre creatures that shouldn't exist in nature, and a sinister conspiracy is afoot. You arrive at the snowbound town to find that not everyone managed to make the evacuation... and you're not alone. Or wanted. Elephant Games delivers another stellar cinematic hidden-object adventure packed with strange sights, twists and turns, and will keep you wrapped up in your sleuthing for quite some time.  ...