Reporters, man. They're always getting in trouble. Ben Urich, Bill Smithback, and now Sarah, who vanishes in the most dramatic fashion possible while doing a report on the famous, though apparently deserted, Black Isle. (No, not that one.) Naturally, it turns out "deserted" needs to have those quotation marks around it, since you arrive on the scene just in time to see a sinister cloaked and masked figure perform what looks like some pretty spectacular dark magic. You're all on your own as you try to unravel the mystery and rescue Sarah, but that's not the same thing as being alone, and it's soon pretty apparent someone doesn't want you to succeed. Mystery Trackers: Black Isle is the latest installment in the hidden-object adventure game series by Elephant Games and blends high drama with creativity to burn to deliver one big, explosive adventure well worth the price of admission. 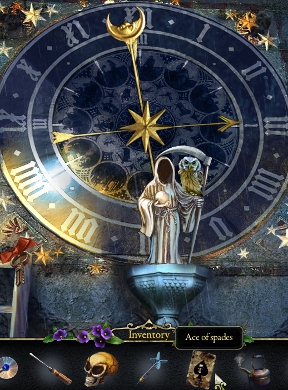 With three flavours of difficulty to fit your playing style, you'll be trekking all over Black Isle, thwarting increasingly elaborate attempts on your life as you search for Sarah. While most of the gameplay is about what you'd expect in a hidden-object adventure hybrid, you will also need to use some of the items you'll gather during your wandering to solve hidden-object scenes. If an item is noted in purple on your list, that means you'll need to use something in your inventory to get to it. While there's no journal this time around to keep track of clues and plot points, the world's most adorable hint frog is back to guide you, and of course you can skip the puzzles you encounter if you get stuck.

Analysis: With Black Isle, Mystery Trackers firmly cements itself both as one of the most creative and cinematic series around. Like The Void and Raincliff, Black Isle delivers a delightfully campy mystery adventure. While some of the acting is more than a little hammy, it's one of those games that manages to really convey just how much fun everyone had making it. From its gorgeous design and environments to the constant cinematics and over-the-top plot chock full of conspiracies and the paranormal, Black Isle is simply a big, fun game. When mysterious explosions and lightning bolts and eerie warnings start popping up all over the place you don't have the option to call in Nick and Monroe, and you're going to have to put on your big kid detective pants and solve this one yourself. 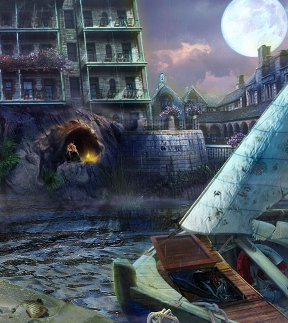 If Black Isle ever disappoints, it's that it feels like there's an awful lot of backtracking to be done, the game as a whole just isn't that challenging, and the hidden-object scenes are a little bland visually. But while the gameplay itself is mostly your standard go here, use arbitrary item there affair, Black Isle still manages to keep you engaged because of how hard it works to keep you on your toes. New plot developments are always popping up, things are always trying to kill you, store windows are foretelling your bloody death when you glance into them... you know, all that good stuff. The puzzles are mostly just variations on standard types you'll have seen before, but they are, at least, both plentiful and varied.

Players who prefer their games more on the straight-laced, serious side may find Mystery Trackers: Black Isle and its occasionally over-the-top campy drama and plot twists a bit too silly. If, however, you want something big and vibrant that works hard to entertain you every step of the way, as opposed to merely just providing four or five hours' mindless distraction, then this is definitely a game with a demo you should check out. It would be nice to see a Mystery Trackers title where the level of complexity in the gameplay matched what you get in the plot, but for fans of the genre who like a lot of flair and energy, Black Isle is easily recommended.

Go right to the Mountain Trail.

Go right to the Mountain Trail.