Animal attacks bad enough to cause evacuation? Well, turns out invisible man-beasts, aggressive hybrid squirrels, and angry pterodactyls are a tad bit more alarming than raccoons in your garbage. It's happening in the town of Brightfield, along with unusually low temperatures and snowfall that complicates the evacuation efforts. As a Mystery Tracker Detective, you smell adventure and a more interesting evening than being yapped at by your tiny dog, so you set out to the snowbound town by private plane to discover the truth. Mystery Trackers: Four Aces is a hidden-object hybrid that's a fantastic stew of action, campy drama, and spider chipmunks that spit venom at you. So, you know. Good luck ever feeling safe in the forest ever, ever again. (Eh, there are worse things.) 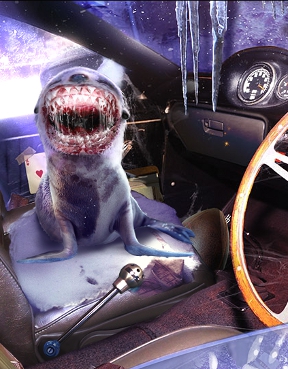 This time around, you've got both frog and pup to help you in your investigations, which probably means Batman won't take you seriously. Elf can be used to dig or fetch certain objects, while your amphibious companion acts as your hints when charged. The streets of Brightfield are full of freakish hybridized creatures, some of which can be nabbed to add to your bestiary, but others will need items to scare them away or placate them, and you know what that means. You get to rifle through piles of junk and creep around scary deserted streets looking for useful objects! It also seems like there's someone in Brightfield with a serious grudge against puzzles, since most of the ones you encounter are broken and missing pieces that need to be tracked down as well. As a bonus of sorts, you can even find special chips you can use to spend on not-actually-useful-whatsoever toys for Elf's house, which I might be more inclined to make fun of, but considering this is a dog who can open doors for you, merrily retrieve keys across rooftops, and more, I guess maybe he's entitled to a squeaky ball even if he is one of those obnoxious little yap-yap dogs. On top of all this, it looks like one young girl named Kelly missed the evacuation and is being pursued by a massive angry beast, and a secret society of thieves known as the Four Aces appear to have a hand in the events. Which means Umbrella Corporation is probably going to serve them a cease-and-desist for infringing on the whole "unspeakable acts against nature for personal gain" thing. 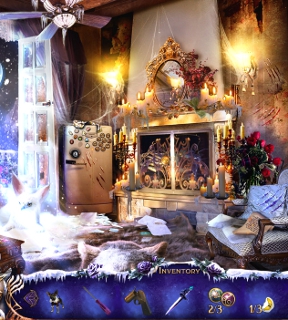 Analysis: I always enjoy and thus recommend the games I review, but Mystery Trackers is one of the few hidden-object adventure I genuinely love and look forward to. Cross my heart, hope to fly, stick a cupcake in my eye. Their combination of cinematics, highly creative camp, and flair for puzzles and adventures make them some of the best games around, and Four Aces is no different. Though one of the big plot twists is probably fairly easy to see coming, the story is packed full of intense moments, attempts on your life, drama, and big hair beasts menacing screamy girls. Something about the combination monster movie/mad scientist/secret society thing just works, and makes for grand entertainment... sort of like if Sherlock Holmes, Indiana Jones, and Frankenstein were forced to coexist in the same glorious novel. The frequent noir-style narrated scenes might be a bit cheesy but keep the plot moving along at a brisk pace, and the whole design is gorgeous.

The downside? Even if you're playing on one of the harder levels of difficulty, the game isn't much of a challenge. Objects needed to get past obstacles are frequently found in the immediate vicinity when you need them, and most of the puzzles are less about brain power and deduction, and more about simply matching things or swapping things or putting things on or in other things. Most of it is actually very logical, which is nice, but players looking for a game that will truly make them feel like a detective with a big, fat brain might be a bit put off. You'll also end up doing quite a lot of backtracking, though the interactive map that lets you hop around takes some of the sting away. But with over five hours of play, not including the bonus Collector's Edition chapter that actually feels like a bonus rather than something cut off from the core game to justify the extra cost, Mystery Trackers: Four Aces is one of the most easily recommended hidden-object adventures around. Elephant Games should already be synonymous with quality for you if you've played any of their other games, and this latest is another resplendent feather in their cap. If you like action, campy adventure, strange sights and drama that doesn't take itself too seriously, do yourself a favour and check out the demo today. You're in for a treat, and one wild ride.

Options and Modes of Play

Side Street and Crossroad

Balcony and Side Street

Options and Modes of Play

Side Street and Crossroad

Balcony and Side Street