With his last batch of books being spectacular flops, horror writer Kevin Sting seeks out an old house with a bad reputation, looking for some inspiration, but vanishes without a trace. An illusionist who's made a career on defrauding his fellow magicians insists he can locate the missing writer, but promptly goes missing as well. And when a broadway starlet completes the odd list of characters that vanish into the mansion, well... it's time to call in the big guns. Mystery Trackers: The Void is a hidden object adventure game from developers Elephant Games (Lost in the City) that will take you beyond even mysterious Void house to an unlikely world. Exceptionally good looking with a creative story, The Void is a lot of fun despite some relatively easy gameplay, and absolutely worth a look if you're a fan of the genre. 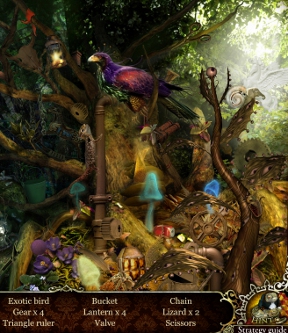 You, of course, are a detective in the employ of the Mystery Trackers, which, as goofy as it may sound, is actually the modern day offshoot of an ancient order of knights whose duty was to track down mysteries and horrors before hysteria took over the populace. The mansion you arrive at is called The Void after its owner, Malleus Void, whose reputation as a mad scientist who conducted strange experiments garnered the place a lot of attention before his death. But just because Malleus is gone doesn't mean the mansion has given up all its secrets, and together with your tiny, trained frog in a monocle and Victorian clothing, you'll uncover them all! You heard me.

You'll search the mansion for clues, paying attention to your environment to find suspicious places that may hold clues or other secrets. Just click to interact, and click on your little frog for a hint, if you need one. Hidden object scenes yield the items you'll need to progress, but you can also find a lot hidden everywhere in the areas you travel. Be sure to refer to your journal frequently, not only to keep abreast of the plot, but to refer to the clues you'll write down when you find them. You'll need them to solve the various puzzles you'll come across, but if you get stuck, you can simply skip them.

It should also be mentioned that the full install of the Collector's Edition weighs in at a meaty 722 MB. So, you know, forewarning and all. Maybe this is the excuse you've been looking for to finally kick the habit and delete all those Britney Spears MP3s you think nobody knows about? 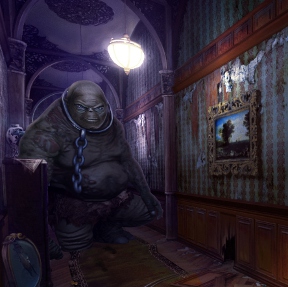 Analysis: Games are best when they surprise you. Going into Mystery Trackers: The Void I didn't have high expectations; I was expecting a cut'n'paste haunted house story. What I got was... well, imagine if someone put "The Island of Doctor Moreau" and "Charlie and the Chocolate Factory" and the complete works of Agatha Christie in a blender and hit puree and you'll get a sense of what The Void is like. The initial hour or so of the game is extremely straight-forward, but the farther you go, the stranger and more interesting things become. Don't get me wrong, we're not talking Bram Stoker Award stuff here. But after so many casual adventure games with boring, no-frills plots, the twists and weird reveals The Void offers up are a breath of fresh air. The game is absolutely beautiful as well, with incredibly detailed, atmospheric environments and a great soundtrack.

The game is also chock full of references (subtle or not) to classic horror movies and culture. It's got a few creepy moments, but the overall strangeness keeps it from ever becoming actually scary. There is an imaginary scene in my head I have grown quite fond of, having played the game, and it goes thusly; the developing team for The Void, all wearing power suits, are sitting around a massive table, backlit by lightning crashes. A man wearing no less than twelve crazy hats slams a fist down into his palm. "Not good enough," he says, a mad glint in his eye, "make it crazier." The designers begin to sweat. 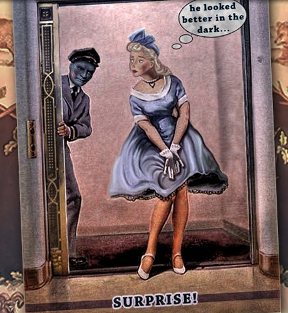 The Void's only shortcoming might actually be that it takes a while to really start showcasing how good it is, and never gets particularly difficult. The puzzles range from logic to math to other odd challenges, and manage to be more creative and engaging the farther you go. You also never repeat a hidden-object scene, and you're always moving forward through a series of unique environments with little to no backtracking. When you do return to an area you've already explored later in the game, you'll usually find it significantly transformed.

Mystery Trackers: The Void is one of the few games that managed to keep me interested and engaged in both plot and gameplay until the very end. Which, incidentally, was for quite a while; around six hours, not including the bonus episode available in the Collector's Edition. If you're hoping for something serious and dark, The Void's slightly goofy tone and increasingly elaborate plot reveals might not be for you. But if what you've been craving is a hidden-object casual adventure title with tons of polish and originality, you should definitely check this one out. The Void gives fantastic value, and the Mystery Trackers series has earned a permanent place on my radar.

A Collector's Edition is also available. It contains a built-in strategy guide, as well as a bonus chapter to play, and other bonus materials. Remember that Big Fish Game Club Members pay only $13.99 for Collector's Editions (or 2 club credits), and collector's editions count 3 card punches of 6 total needed for a free game.

Breach in the Wall

Corridor Closet and the Bathroom

Click on the screenshot to see the close ups and follow the instructions to get the subway car moving.

Chapter 9: Return to the Mountain Hotel

Screenshot
Congratulations! You are now officially a Mystery Tracker, having solved the Mystery of The Void.

Epilogue to the Basic Adventure

Hangar on the Yacht

Left Door in the Salon

I played the demo and there were like 4 hidden item puzzles in the first 30 minutes. Does this continue until the end of the game since that's not really my thing.

It's a hidden object adventure, so yes, finding hidden objects makes up a significant portion of the gameplay.

when i get to the bedroom which is full of smoke i need to use something from inventiry..which i have.......but when i move the cursir to go to inventory it takes me back out of the room, is this a fault with the game or am i doing something wrong...great game up to now but i can't get any further
76xhz2

Breach in the Wall

Corridor Closet and the Bathroom

Click on the screenshot to see the close ups and follow the instructions to get the subway car moving.

Chapter 9: Return to the Mountain Hotel

Screenshot
Congratulations! You are now officially a Mystery Tracker, having solved the Mystery of The Void.

Epilogue to the Basic Adventure

Hangar on the Yacht

Left Door in the Salon

It's a shame that there aren't more comments here about this game or more votes for that matter - this was a much more fun game than I expected. Last adventure/hidden object game I played was Return to Ravenhurst (awesome) and my expectations were a bit high. Tried the demo first, and since it was on sale ended up buying the game because I HAD to know the story of that troll! This was fun, albiet not very challenging, but it was LONG. Well worth the few bucks I spent on it!

At one point in chapters 5-9, Mr. Toad (hint button) stopped coming back entirely and I haven't been able to find any reference to this happening in any walkthrough or reviews section. Does anyone have any idea what this is about?

I have the shovel at the front of the hotel and the mound of dirt will not allow me to dig or swipe or anything. Any suggestions?

JiGuest -
Have a look at the walkthrough posted above the comments and see if you maybe missed a task.

So I tried to backtrack and complete a missed puzzle in the garden I believe but it will not allow and each time I try to dog into mound with shovel nothing still happens and the frog helper always says there is a mound that needs to be explored. Any hintson how to get back to the garden?

JiGuest -
Which garden and what puzzle?
The mound of dirt is a Hidden Object Scene.

The mound will not let me dig and the toad tells me only hints abt the mound so I am guessing I have all the games completed to get to where I am stuck. There was a puzzle that was in the garden that I did not recognize ..

JiGuest -
We are still at the same prob. Since I don't know what puzzle in what garden, I have no clue how to help you.
It appears that you have used the Tram to get to the Hotel, so you cannot cross back. If the puzzle you missed is the prob, you will have to start a new profile and replay the game.
Unless you missed something, the shovel should work to activate the H/O Scene.

HELP!!! Everytime I click on the soda machine at the subway, I get kick out of the game.

I'm having difficulty using the gauntlet to pick up the metal file in the trap. Any reason why or any specific place I need to put it?