Those of us who spend all day playing browser games are no strangers to the art of laziness, but the little pajama-clad infiltrator in Sean James McKenzie's Lazy Thief is a true master of the craft. He's driven enough to sneak all the way into each of the 50 levels, hauling a bag of rocks, bouncy balls, and ninja stars the whole way, but he can't be bothered to scamper up the blocks to grab the precious gems. That's where the physics puzzles come in. Click to lob your various projectiles at the diamonds to knock them onto the color-coded platforms nearby. Some blocks will crumble on contact with a projectile, some will require some fine-tuned bouncing with a bouncy ball to strike at the correct angle, and sometimes there's a string you have to cut with a ninja star. Watch out for the diamond-destroying lava squares. If you can get the gems onto the correct platforms they'll magically teleport into your possession. Thievery has never been so lazy! 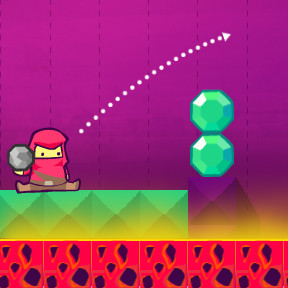 There's no limits on how many projectiles you can throw, but Lazy Thief will punish wasted throws with a lower score. The difficulty curve is gradual and consistent, throwing new twists at you that are engaging but not frustrating. And the physics are rock solid. The game wouldn't be much fun with bad physics, but luckily everything rolls and bounces just like it's supposed to. It is slightly disappointing that the levels are so bland on the art side of things. Maybe that's an unfair quibble, but when the music is so strong and our main character so detailed, it's kind of unfortunate that we're not knocking gems around in some medieval vault or mansion instead of an empty expanse of blocks straight out of a Q*Bert game. But hey, that's why sequels exist, and Lazy Thief certainly deserves one. If nothing else it's a near-perfect proof of concept, a great little entry in what could become a new Bloons. Lazy Thief is cute, fun and challenging. Now take a seat, pop a can of soda, and settle in for a night of low-effort robbery.

Is there anyway to resize the game window? On Level 4 I can't see the floor as it's cut off...

Ignore - seems my browser zoom was playing up :)

Is anyone else unable to complete level 5?

Game is a tremendous resource hog. I had to give up after about 5 levels because it was so jerky. Both my processor cores were maxed out.

Level 5 is unplayable so a waste of time trying to play the game.

Just drop a ball onto the upper level between the green and blue gem. If it lands right, you may do finish the level with one shot.

Put your cursor right in the center of the third brick from the top (bottom brick of the three brick at the top). Move the cursor straight left until it is on the line that passes through the top green gem. Click.

Does anyone have any tips for level 32?

Tremendous lag. Had to quit at Level 5.

And forget trying to 1 shot everything.

Level 32 is tough! Here's what worked for me:

throw a rubber ball over the top, just right, and it'll bounce around and knock out the two horizontal blocks. Then a stone ball on the left side's upper horizontal block, so that it drops right down and KOs the lower one. That's in two throws. Don't knock any of the middle vertical blocks out.

Anyone have ideas about Level 33?!

> Dora— Trapped in a dangerous lab of soldiers and monsters and deadly instruments, you've been sprung from your cell by a faceless hacker. Now it's up to you to blast, explode, dissolve, and electrocute your way out in this challenging and varied physics projectile puzzler.  ...

> Dora— Dummy never fails, but how about you? Can you guide him to the target on each level (after shooting him out of a cannon, naturally) and get him past all the obstacles... without sustaining much damage? This physics projectile puzzler is trickier than you might think, especially when you toss in gravity manipulation and a whole slew of pop culture dummies into the mix.  ...

> Dora— Experience the thrill of throwing explosive devices at unarmed and completely stationary bad guys with googly eyes all over again, in this level pack addition to the popular physics projectile puzzle. Only you won't get to experience said thrill for very long, since this pack comprises a lonely ten levels, but you'll experience it nonetheless.  ...

> hamfist— Thanks to the huge success of games like "Angry Birds" and "Crush the Castle", the physics projectile genre is one of the hottest in casual gameplay of late. Smokoko's entry, King's Game, puts a twist on the style: your targets can fire back! Obviously, it would always be your best option to decimate your opponent as quickly as possible, but in this game, it can become a necessary strategy. The AI is a fairly accurate shot, and doesn't miss that often, even on the beginning levels.  ...