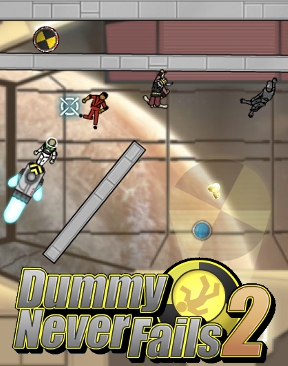 The title of Tanoku's latest physics puzzler almost sounds like a challenge. Dummy Never Fails 2, the expanded follow up to the 2010 original, is all about using a cannon to blast hapless crash test dummies at targets, while trying to ensure the dummy sustains the least damage possible. It sounds like a simple task, until you start messing with the gravity and throwing in blockades, moving targets, bumpers, and more. It's like if the Mythbusters had all the budget they could ever want, and were also insane supervillains. Sweet!

Just point and click to shoot, and either use the [WASD] or [arrow] keys to change the gravity in the level, indicated by the little white dot in the box at the top of the screen. (You can also simply click and drag this dot around.) The path to the target is rarely straightforward, so you'll have to experiment to figure out the best way to get around any obstacles in your path. You can't run out of dummies, so feel free to bombard the screen with them to try to meet your goal, but if you do, you can expect your score to suffer since damage is cumulative across all dummies. Of course, if you don't care about your letter grade, feel free to swarm the area with all the dummies you can while frantically waving the gravity in random directions. You'll get there eventually!

There's no denying that this is a significant improvement over the original, with more challenges to overcome, more elements to experiment with, and a lot more finesse to the design. At the same time, however, it still doesn't feel quite as silky-smooth as you might hope. The gravity is sluggish to react to key manipulation, so a split-second for the game to register that you want the orientation changed can turn that title into a lie. The game also doesn't explain much past the first level, sitting back with an indolent shrug to pick its teeth while you try to figure out what the blue thingies are, whether they're affected by the math thingies, and whether your gravity thingy works on those thingies too. Still, if you're down for a little experimentation and have always wanted your very own Buster, Dummy Never Fails 2 is a silly, great way to spend a coffee break or three, especially if you make use of the level editor. Dummy never fails, you say? We'll see about that, pal. I haven't yet BEGUN to fail!