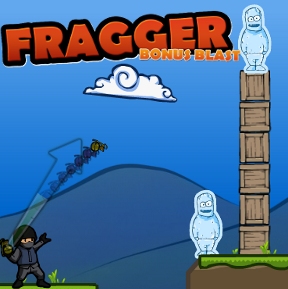 If you were a fan of the original Fragger, you were sad when it ended. Well, now you don't have to be sad anymore!... um... for a bit, anyway. Fragger Bonus Blast is here, and it's got all of the physics-projectile-puzzle action the original did!... it's just shorter. Like, a lot shorter. Harold Brenes has apparently been patronizing a lot of snooty French restaurants lately, because the ten levels that make up this bonus pack are the gaming equivalent of an amuse bouche... although thankfully without the need to dress up and the enormous price tag such things typically arrive with.

The premise is still exactly the same; you want to blow up or otherwise do away with the cheerfully grinning masked baddies on screen, only this time, they're all frozen now because why the heck not. Just point and click to toss a grenade, moving the mouse toward or away from your character to adjust power and aim. You only have a limited amount of grenades for each level, so take your time and make 'em count. Fail, and you can simply restart the level without penalty.

More of a good thing is usually, well, a good thing, and Fragger offers up the same charming, simple challenge of the original. But it's so short that the lack of any real innovation, and the fact that the first four levels are essentially just training wheels, particularly rankles. If you don't really have a lot of time in your day between children, work, saving the environment, or engaging in fisticuffs with giant monsters attacking major metropolitan cities, then you'll probably just enjoy Fragger Bonus Blast for the well-made snack it is. The rest of us will still enjoy it, we'll just sulk a lot more when we're done.

Fun but yeah, waaay too short. Finished this in under ten minutes, with two restarts on level 10.

I was on level 8 but Adobe Flash crashed on me.:(

All they have done here is copy the levels that were created for the iPhone app version and port them on to the PC version (with some interesting grenade physics...)

This is more a demo for the iphone app than anything.

Hang on, someone's just given us something for free - something we enjoy... I know - let's complain! Yaaay!

It's so short that it feels like an ad for its iPhone version rather than a complete game.