I admit that I initially cast a little side-eye at Vogd and Assaulter's physics projectile puzzler Death Lab, mainly because it sounded like Fragger by way of Ricochet Kills and Resident Evil, but though it feels similar to all those things, it also does enough to make itself feel unique and fun. As an unnamed soldier freed from an underground prison/evil laboratory by a faceless hacker, you have to escape the facility by using a variety of unusual weaponry to take out every enemy on each stage with a limited amount of ammo... don't worry, they're very polite, and they'll wait for you to do it. It's rarely a simple matter of plunking down headshots, however, and you'll have to use your environment to your advantage, from blasting apart acid baths to dissolve your foes, to burning and toppling destructible parts of your surroundings to do the job for you. With bullets, molotov cocktails, grenades, and a Tesla gun that can zap through several enemies at once, you certainly have the arsenal (and available upgrades!) for the job, but it ain't all about firepower. 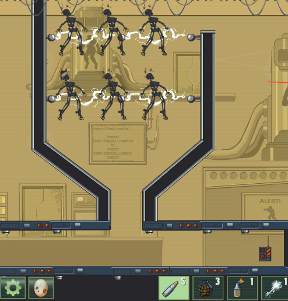 What's neat about Death Lab is that skill and planning are more important than they initially seem. Headshots will instantly kill an enemy, instead of having to waste valuable bullets plugging away at their health, and many of the levels are unexpectedly thinky when it comes to solving them. Each stage also comes with optional missions ("Destroy all enemies in three shots while singing Smile, Smile, Smile"), though a stage's missions can often conflict with one another, forcing you to replay it to get both of them. Both that, and the high cost of upgrades, and even the existence of upgrades at all, wind up feeling like they're padding the length a bit. Still, despite that, and the slim margin for error in some cases, the surprising amount of variety to the levels and the enemies/objects and the challenging puzzle aspects makes Death Lab stand out from the pack of samey projectile physics puzzlers. It's worth checking out... even if its infuriatingly short soundtrack loop will have you muting it after three minutes.

It doesn't seem to be loading for me - Chrome on Windows 8.1, only get an empty white box.

Sorry you're having that problem yunruiwatts! :( Can you please try another browser? It seems like there are a lot of complaints about Chrome and flash games this past week. Several of our writers have had that same problem elsewhere on other games that have loaded fine on Firefox, as this one does for me. I wonder if there's an incompatibility between Chrome and Flash somewhere?

Looks like it something about flash and Chrome. Are people having this problem in Chrome on any other OS?

The commercial took a very long time to load for me, and that was a white screen, but eventually it loaded, and it plays fine.
I'll warn you though; when you finish a level and the display of your cash appears, it also lingers on the screen an abnormally long time. And in most games, at this point you can click the display and it moves on. In this game it just makes you continue firing, wasting ammo and therefore losing cash. Just an FYI.

GREAT game...until it falls apart completely at the end.

On levels 44-47, unless I'm missing some kind of trick, you have to rely almost (or completely) exclusively on grenades and molotovs. And you need a lot of them because there's a random factor to the molotovs, and it's really hard to tell where either is going to go before you throw it.

So, hope you were buying a lot of them or you're back to grinding early levels!

Luckily, the boss fight isn't really that hard at the end:

It took me 10 bullets, 4 teslas, and 5 molotovs (it seems immune to grenades). One molotov anywhere will clear the level. Then, use bullets (ricochet so you get two or more hits per shot) and telsa beams to knock it under the acid. One shot opens the acid bath, then you can finish it off with molotovs.

Ending was pretty 'meh' though.

Sheesh, 48 levels? Half of that would be plenty for one game, and that's not counting the side missions!

I love this game. Lots of variety via the side missions, all of which heighten the replay value significantly.

Well thought-out, nicely designed game. This is one I'll return to for a while.