FireBoy and WaterGirl 4: The Crystal Temple

This time around, Oslo Albet wants you thinking with portals. In the latest installment of the finger-twisting puzzle-platform series, FireBoy and WaterGirl 4: In the Crystal Temple, our two polarised protagonists are once again trapped in a labyrinthine structure packed with treasure and peril. They'll need to work together to find their way safely through each level, with FireBoy nabbing the red gems and WaterGirl the blue, but there's a catch that has nothing to do with false baked confections. Figuring out how to get to each exit usually isn't that difficult, and getting each gem not much more so. But trying to do all that in a hurry? You'll need to think fast and form a truce between both hands if you want to succeed here. 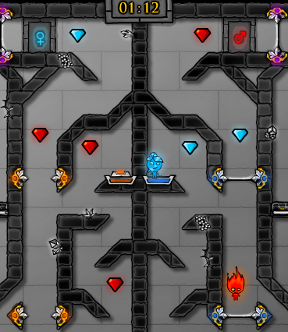 See, as in the previous games, you control WaterGirl with [WASD] and FireBoy with the [arrow] keys, and you need to keep them away from their opposing elements. WaterGirl, for example, shouldn't take a lava bath, though FireBoy can wade through it fine, and both heroes want to avoid the green acid. If either of them dies, you have to start the level all over again. This time, however, you find yourself in a temple where there are portals everywhere. Each portal sits in a gem frame and links to the other identical frame elsewhere on the level, but some portals have different destinations depending on which side you enter, so remember that the white glow links to white, and the black to black, as long as the gem colours correspond. Some need to be activated by pressing buttons or flipping switches, and you can even push objects through them.

A big part of the series' appeal has always been how deceptively easy just getting to the goal in each level is. Since your speed impacts your overall ranking just as much as getting all the jewels, it quickly becomes apparent that while the game can be enjoyed by just about anyone, it'll take a player with fast reflexes and the ability to move both hands independently to bring home the gold. It's this challenging twist that's made the series as well-loved and sneakily difficult as it is, and the addition of portals adds a new layer without muddying up the formula. The white and black glow around portals, however, is sort of hard to see as thin as it is, and players who are colour-blind may have trouble telling some of the colour-coded buttons and platforms apart without trial and error. The initial batch of stages feel almost more geared towards speed than puzzles, though the farther you go, the better the game becomes at striking that balance between dexterity and cleverness. The result is a game that's accessible to everyone, but also a challenge in the best possible way. FireBoy and WaterGirl 4: The Crystal Temple is more of that tasty blend of brains and reflexes you've come to love that somehow manages to keep its sizzle and fizzle going in the best possible way.

Great game so far, but is it just my computer, or does it occasionally lag a little?

No, it tends to lag.

loved it! this would have been a 5 star game for me if it hadn't started to lag so terrible by the last 7 levels... so badly that i finally had to give it up... tis a pity :(

Is there a reason it blatantly steals voices and sounds from Zelda?