FireBoy and WaterGirl 2: The Light Temple 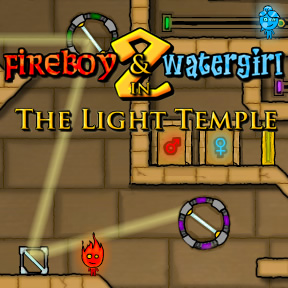 Everybody knows that fire and water don't mix. But sometimes they can work together, grabbing gems, flipping switches, pushing blocks, and adjusting mirrors. When does this happen, you say? Why, in Oslo Albet's follow up to last year's FireBoy and WaterGirl, of course. Now his cute, anthropomorphic elementals leave the Forest Temple and take their incessant diamond collecting to the fabled Light Temple. Here they discover new challenges across 40 new stages of brain-bending, keyboard-taxing action.

Like its predecessor, FireBoy and WaterGirl 2: The Light Temple is a platformer that has you controlling not one, but two characters at once. Both FireBoy and WaterGirl have their own controls (the [arrow] and [WAD] keys on the keyboard) and can be moved independently of each other. Your goal is to use both characters to grab as many gems as possible while leading them to their respective exits. In your way are various traps and switches, as well as pits filled with fire, water, and well, deadly black stuff. FireBoy and WaterGirl can walk in pits made of their own elements, but will vaporize if they touch their opposite element or fall into a black pit. As before, stages include a series of time-based runs, an assortment of levels designed for simultaneous character movement, and more crafty and devious stages requiring the duo to grab a single diamond before exiting.

Most levels involve some elements of teamwork between FireBoy and WaterGirl. Usually one character has to stand on a pressure-sensitive button that raises a wall to allow the other character to pass. Other levels require both characters to push a heavy block, or operate a see-saw to reach higher areas. There are even a few tricky stages that require you to move both characters simultaneously, with FireBoy and WaterGirl jumping on the same platforms or running to areas that are otherwise inaccessible. 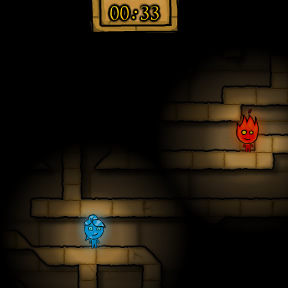 While much of this sounds familiar to Forest Temple fans, the Light Temple has a few new surprises for unsuspecting visitors. Some levels are pitch black, illuminated only by a glow around the main characters and nearby platforms. Other stages require careful manipulation of light beams to trigger photosensitive switches. There are even special movable blocks with mirrors on them that reflect the light 90 degrees. These mirror-blocks require precise placement to allow a light beam to reach its intended target.

Analysis: FireBoy and WaterGirl 2: The Light Temple is a tricky title, but it's also quite fun once you get the hang of it. The game's dual-character control is one of its most challenging aspects, but once you understand how it works, there's satisfaction in busting through a level with both characters blazing. I especially like the levels that were made for simultaneous two-character play, some of which have a mirrored design to help our addled brains cope with the game's unique challenge. If done right, beating one of these levels not just feels satisfying, but it might even look pretty impressive to someone watching over your shoulder. The mechanic aside, I'm impressed with the number of levels and their variety. The light-manipulation and darkness stages are some of the game's more entertaining ones, though also a bit trickier.

While the level design is clever, the game also has a few issues that make things a little difficult at times. Your characters are pushers, not pullers, so on levels requiring block and mirror movement, an accidental shove can wedge an unfortunate block against a wall or another block, forcing you to restart the level. It can also be a little maddening to go through a whole elaborate sequence of movements, switch hits and button pushes, only to find that you're trapped, or discover that a block you need to move is suddenly inaccessible. The keyboard controls themselves (which still only works for QWERTY layouts) also occasionally like to respond a little too late when you're trying to make critical jumps over deadly pits. Thankfully, most levels take between 30 seconds and 3 minutes, so even if a restart is necessary, it's not the end of the world. Usually the second or third time around, you can go through a sequence much faster, and before you know it, the level's complete.

While FireBoy and WaterGirl 2: The Light Temple has its share of challenges, ultimately the game's clever level design, fun control mechanic and effective use of two characters makes getting through the levels feel like an accomplishment. Fire and water may not mix, but you and this game might be a match if you are looking for a platformer puzzler with novelty and plenty of variety to satisfy.

This game is awesome! I never played its predecessor, but I will now. I just have one question. How do you get above a "B"?! I have finished levels in less than a minute with all gems and still apparently am not doing well enough. Do you have to move both characters through the level simultaneously at top speed or am I missing something?

I love this game! A friend and I used to always play the first one together (b/c we failed)and this one is just as great. The level set up is wicked confusing, but the order doesn't seem to matter that much, as I've done levels one through seven, plus forty - forty being the only one I got an A on.....

To get an 'A' on most levels, I believe you need to get all the gems and complete the level in under 30 or 45 seconds.

Getting an A is impossible for me because the game hoses my computer and runs slow as molasses in February. I'm enjoying the puzzles, but um, it took seven minutes to complete level 2 because of lag.

Doesn't save in Chrome :(

Great game! Just one little flaw: There's nothing to celebrate that you have managed all the levels. Couldn't I at least get a little happy melody?

Finished level 4 in 19 seconds by taking advantage of the reverse symmetry. Still got a B!

Gee, another Armor Games page that doesn't load in any flavor or version of IE. Why am I not surprised.

Reminds me of why I stopped going there. I thought JIG tested these things, though. If I can't get it to work in IE on several different machines, you'd think that would have been obvious...

[I've relayed the issue to the folks at Armor Games. In the meantime, you should probably try a different browser than IE if you wish to play this game. -Jay]

It was working this afternoon, and curently it don't work on firefox too, I think the page is broken.

I think so too. I was happily playing it last night, but not so much today.

Dang. FINALLY after scrolling through all the download games, I find a gem and it will not load. *sigh* Well, I hope it's up later anyway. I loved Fireboy and Watergirl!

The pages not loading issue at Armor Games this weekend has been fixed.

And the problem of not saving the game ? I don't know if it saves on ArmorGames, but anywhere else, it doesnt seem to.

[I didn't have a problem saving my game at Armor Games. It is my understanding that the game is exclusive to Armor Games until Friday of this week, so perhaps the problem of saving state on other sites is due to that. -Jay]

Level 24. GAH!. I've done all the rest. But one or the other of my little guys keep dying in the tar pits.

I love the power of posting. I finished Level 24 with a "C" grade. I'll take it!

Was it just me...or did anyone else get Rank A for stages 31-40 (all the 5-sided gem stages around the outside of the map) and Rank B for everything else? lol

Omg! How do you pass level 22! ITS GOT ME STUMPED! SOMEONE PLEASE HELP!!!!

On the level where it introduced the light gameplay mechanic, A sense of foreboding overwhelmed me. Were the insane reflex challenges not enough? Do we have to deal with finnicky light physics too?!

Cannot get through level 5
Other levels were easy!!!!

when i play this game, it loads then i click play and i go to the level select but i cant enter a level! i click on both the yellow things but none of them work! nothing works! this game is broken

This will sound weird but on "non-puzzle" levels (like #4 for example) speed will get you an A. I beat it in :17 and got the A. However, on true puzzle levels where thought is required, time has no bearing. On those levels you'll get an A based on making as few moves as possible. less mistakes = better chance of getting an A. For example, I took 6:15 to beat level 36, but I completed the puzzle in the correct order w/o mistakes and got the A.

This will sound weird but on "non-puzzle" levels (like #4 for example) speed will get you an A. I beat it in :17 and got the A. However, on true puzzle levels where thought is required, time has no bearing. On those levels you'll get an A based on making as few moves as possible. less mistakes = better chance of getting an A. For example, I took 6:15 to beat level 36, but I completed the puzzle in the correct order w/o mistakes and got the A.

It is a good game.

Got Rank A in Level 6 by finishing it in 44 seconds.

Got Rank A in level 9 by finishing it in 22 seconds.