When a hidden-object adventure opens with some lady casually obliterating some woman in weird cosplay lounging sexily on a rock a few miles away from the ocean, you know you're in for a weird ride, and EleFun Games' Witche's Legacy: The Dark Throne. See, that was no ordinary bejeweled lady... that was the wicked witch queen, Morgana, and ever since destroying her several months ago, Lynn is just now beginning to relax and enjoy married life with her boring husband... you. You have, in fact, with the help of Lynn and her mother, opened a museum of magic named in honor of your brother (and I mean literally... the name on the building is "Museum Named in Honor of Thomas Charleston", Lynn, you creative minx, you), and it's in that museum that Lynn is suddenly spirited away by dark energies after stumbling upon a stained glass window that turns into a portal into another world. Together with the help of your loyal family imp, you set off to rescue Lynn and find out what's going on, which means exploring a lot of dangerous places seething with dark magic, and undertaking a lot of tasks and otherworldly puzzles your witchy wife is probably way more qualified than you to undertake. Then again, you are a former Witch Hunter, so maybe things will work out in your favour after all. Click around to explore and interact with things, pick up optional puzzle pieces to unlock more of the backstory, and use your little imp pal to help you in certain situations. You know, like when you need a tiny grunting green dude to pop a pose and flash gangsta signs. Witch stuff. 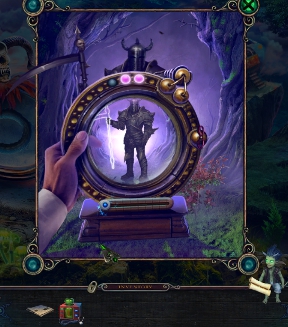 Despite having an actually fairly complex backstory, one the game does an admirable job of filling you in on even if you haven't played the other games in the series, The Dark Throne never gets oppressively dark or gloomy. Every place you visit is chock full of a wonderful amount of detail, as haunted paintings vie for your attention with magical roses, bubbling flasks, and more to create an atmosphere that draws you in to explore every nook and cranny. It's a little goofier and cheesier than players who crave a more Labyrinth approach to their borderline-spooky fantasy might prefer, but Witche's Legacy: The Dark Throne wears this mantle well. There's so much creativity in the environment design and the characters and critters you'll encounter that it breathes a lot of life into the setting and story. In short order, of course, you discover that Lynn doesn't appear to want your help, and you're forced to follow her deeper and deeper into the "Other World" while its denizens talk of a new queen. Predictable? Sure, but gorgeously pulled off thanks to some beautiful artwork and a sense of whimsy and creativity to the whole design, making you want to keep playing just to see what you'll encounter next.

The gameplay itself is more straight-forward. While you're interacting with a lot of quirky machines and magic, none of it really follows any logical progression. Of course you somehow know the seething gatekeeper of darkness is "clumsy" so he can be tripped even before you use a magical item back at the museum to "tell you his secret". Of course there's a machine back at the museum that just happens to be able to make an item you need in order to proceed somewhere else in the Other World. But let's say you're not a mildly cantankerous game reviewer who has played a thousand of these and is just mad she was out of coffee creamer this morning. Witche's Legacy: The Dark Throne doesn't really revolutionize anything with its convenience-centric gameplay, but there aren't any real shortcomings to speak of either. The imp is unexpectedly cute and full of character whenever you need to call on him, the puzzles make inventive use of the magical plot by presenting familiar concepts in stunning and inventive ways, and some of the hidden-object scenes, used sparingly throughout the game, are actually really creative, like one that takes place upside-down on the underbelly of a floating island. While it's easy to be cynical about casual games, it's important not to turn a blind eye to the quality and talent behind them, and Witche's Legacy: The Dark Throne has both in spades. It's funny, wonderfully weird, full of life and vibrant colour, and completely unrestrained in embracing everything that can be done with its fantasy concept. If you've been looking for a lengthy hidden-object adventure that will transport you for a few hours and keep you entertained every step of the way, you should make time in your schedule to check this one out.