Witches' Legacy: The Ties That Bind

A mysterious knock on the door, a mysterious package on the stoop, you just know this isn't going to end well for whomever finds the parcel, don't you? Indeed, in Witches' Legacy: The Ties that Bind, EleFun's latest adventure hybrid, that package heralds the beginning of yet another fight between the forces of good and the forces of evil involving witches, witch hunters, and a ton of hidden-object finding and puzzle solving. It is the day before your adopted daughter (who is a good witch) Lynn's wedding to former witch hunter Edward when suddenly, displaying the brains and judgment of a concussed lemming, Edward decides to walk right into what is obviously a trap to find out what happened when he was a child and his family was killed. 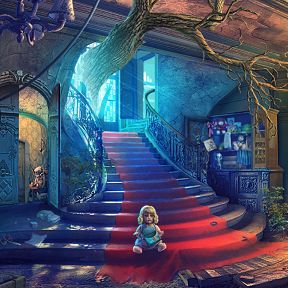 Witches' Legacy: The Ties that Bind is the fourth in the series that follows the life of Carrie and her adopted witch daughter Lynn and their constant struggle against the evil witch Elizabeth. Lynn and Edward's wedding has been a long time coming, although considering his willingness to run headlong into such an obvious ambush perhaps...well, maybe he should no longer be dipping a toe in the gene pool, if you know what I mean? Just saying. Oh well, daughter Lynn loves him and would be upset if he died, so it's time to put aside your doubts and get on with the rescuing. This is your standard hidden-object adventure story with everything ramped to eleven, the graphics, the animations, the gameplay, and especially the melodrama. Featuring hidden object scenes that have a variety of different ways to play including lists, silhouettes, categories, and lots of fun little puzzles hidden inside, this latest in the series continues to shine in the gameplay design, offering enough variety of puzzles and mini-games (and the ability to play hidden match-2 if you don't like finding objects in a junk pile) to keep the player occupied for hours.

While it serves up gorgeous graphics, cool animations, and hefty point-and-click casual gameplay, the best part of the latest Witches' Legacy is the ooey, gooey, massively over-the-top cheesy storyline. Were Edward and his sister Abigail adopted by separate families from the orphanage? Check. Is Abigail a witch who wants revenge on the witch hunters who killed their parents? Double-check. Does Abigail kidnap her long-lost brother in revenge when it turns out he is a witch hunter? Triple check. Was it the evil witch Elizabeth who adopted Abigail from the orphanage, the same evil witch who has been trying to capture Lynn in three other games for her own nefarious purposes? OH CHECK YEAH! With side-quests of morphing objects, puzzle pieces, and toys for your companion imp to find as well as the standard objects needed for any adventure, Witches' Legacy: The Ties that Bind offers tons of entertainment bang for your buck. Pop some popcorn and get ready for enough melodrama to fuel a Telenovela for a year!