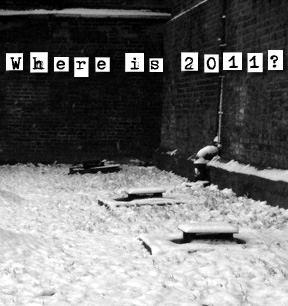 Almost exactly one year ago, Mateusz Skutnik gave us a holiday riff on his popular Daymare Town series in the short point-and-click game Where is 2010? This year, he's giving us a New Year treat in the aesthetic guise of his 10 Gnomes series. Enjoy beautiful monochrome photographs of Gdansk, Poland as you try to answer the question,
Where is 2011?

The new game's short length is similar to its predecessor, but it has a completely different feel, being heavier on the hidden object motif (like the 10 Gnomes games it's inspired by). It's a powerful testament to Skutnik's talent that he can create two games with such drastic stylistic differences and yet have each be unmistakably his work. Not only that, but I'm looking forward to Where is 2012?, which could riff off of Submachine (please oh please!), or the Fog Fall, or Covert Front, or... Okay, I am making an executive decision that the world cannot end in 2012 because clearly Mateusz Skutnik will not be anywhere near finished with New Year's games at that point.

As I've already said, the game is very brief, so if you cheat and go straight for the walkthrough, you'll only be cheating yourself of enjoyment. In fact, now that I know how to beat the game, I can do the whole thing in well under a minute. There is a little something called atmosphere to be appreciated here, along with your usual point-and-click finding of objects to manipulate. There's no mute button, and while usually that's one of my pet peeves, I can't fault him for not including it here, because the understated sound effects are an essential part of the game experience. Definitely put your speakers or headphones on for this one.

Above all, pay attention to the subtle differences in the images through the changing seasons and time of day. In order to find 2011, after all, you have to go to where he enters. Don't rush there, because he'll be coming soon enough.

Thanks to Aexis and Spike for sending this one in!

Where is 2011? Walkthrough now available!

WARNING: Even more than in most games, if you simply follow the walkthrough and don't explore on your own, this game will be over extremely quickly (you could probably do it in a minute). Take your time and enjoy the photography and the ambiance.

After changing the time to midnight but before finding 2011, click on the last light fixture in the row (where you found the calendar). Click on the back light and zoom into it again, then mouse over the snow to reveal the "snow demon" secret (screenshot).

Having played Submachine: 32 Chambers to the end a number of times, I can't help but smile at the comment about the world ending in 2012.

Explore if you want. It's pretty worthwhile.

Get the fob watch (a.k.a. pocket watch - reminds you of Charles Dickenson's Oliver Twist dun it?).

Set the time to midnight. Switch to the waning moon.

Click on the bottom of the second light under the grill.

(The creater would never let us down^v^):

You sure about this?

I am not much into hidden object games but I really liked 10 Gnomes. I am sure that I will like this one as well! Happy New Year!

I love Mateusz Skutnik's work so much! this is quite fun, and definitely easy for those of us who struggle through his typical puzzles. Happy New Year to you too, Mateusz!

Truly very short. Not exactly my thing, buuuuut I enjoyed the view.

WARNING: Even more than in most games, if you simply follow the walkthrough and don't explore on your own, this game will be over extremely quickly (you could probably do it in a minute). Take your time and enjoy the photography and the ambiance.

After changing the time to midnight but before finding 2011, click on the last light fixture in the row (where you found the calendar). Click on the back light and zoom into it again, then mouse over the snow to reveal the "snow demon" secret (screenshot).

I wouldn't have known there was a super secret gnome if I hadn't found him before finding 2011. Quaint little game to pass the time :)

Ok, after reading this review I am definitely saving this for later, for when I can sit in peace and really enjoy it.

I hate to be the bad guy but for the first time, Mateusz Skutnik has disappointed me. I adore everything he had produced and I think Submachine 7 is the peak of his endeavours thus far. However this was just "Click, click, click, click, gnome, done... happy new year."

At least Mr. Skutnik makes the best games available, otherwise I'd feel like an old man yelling at kids to get off my lawn whilst aiming a shotgun from the comfort of my porch positioned rocking chair.

Perhaps stretched too thin, Mateusz needs to focus on one thing at a time.

Having said that, a full length, downloadable, Mateusz vs. Amanita Designs game would be my ultimate New Years' wish.

Please 2011, give me this point and click pinnacle of perfection! Machinarium 2 featuring Mr. Skutnik.

Ok, short and sweet. Would've loved a couple more things to find. Happy new year to you, too, Mr.Skutnik.

Dandy, no, I don't agree with you on wanting Skutnik and Amanita joining forces. I want them separately working hard on making their own stuff, so we have two equally wonderful game creators both feeding us new goodies. Twice the fun!
But ok, maybe for a small cooperation :)

Speaking of Covert Front, I wonder when the next installment will arrive? Anybody have any ideas?