Lovely autumn game by Jon Topielski stands on the border of an escape and puzzle game, and definitely worth a try. Sid Fish's is Sokoban-like puzzler with an interesting concept,and then come two rather original games - mysterious adventure with symbols by Le Slo and puzzle solving action by octo_rain. 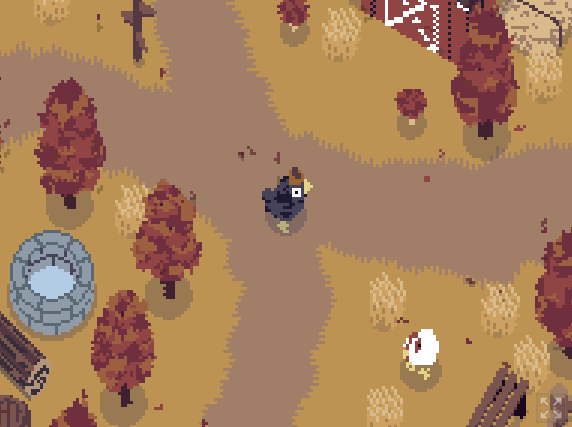 In the autumn park (by Jon Topielski) live beings who want to befriend you and also play with you. Each being is different, and so are their games...some are just happy to see you, some want to win...or maybe not. It's a lovely game and I wished the park was much bigger (and the frog and scarecrow puzzles a bit easier). Your final goal is to get to the barn. Controlled by WASD/Arrow keys, Space/Enter/Z for action.

P.S Mathematical game by the same author you find in WP N°23.

In the puzzle game by Sid Fish you need to escape the dungeon. You are alone but not quite - there are golem-like pawns and you can control them. They remove obstacles in your way to the exit. Interesting concept.
Controlled by WASD/Arrow keys, R to restart a level, U to undo a move. 15 levels.

Here is a short mysterious experince by Le Slo. Nice.
Controlled with mouse. No save option.

Strange puzzle-solving action game by octo_rain is...very strange (at least for non-japanese speaking players). But the game has something in it and is appealing in its own way.
You can click on any object on the gamescreen (animate and inanimate), drag it to the box and then use it elswhere. That's all you need to know.
Moves controlled by AD/Arrow keys, action LMB. Four stages, the third and the fourth have two different ends depending on your play. I'm afraid that the fourth stage has such a high language barrier that it's impossible to finish without knowing Japanese. I wasn't able to pass it, but three stages I did were fun.