OhNoo Studio's new indie point-and-click adventure game brings us a look into a dark unsettling world. With the art inspired by H.R. Giger and Zdzisław Beksiński, you know you're in for an unsettling ride. Tormentum: Dark Sorrow is a tale of a nameless hero trying to find redemption for a past he cannot remember. All he knows is the cage that is transporting him to the halls of torture and a faint dream of a female statue in between hands reaching towards the sky. Our hero must escape his prison and find this statue that haunts him so. Along the way there are puzzles to be solved, items to be gathered, and major moral decisions to make. Plus plenty of creepy people desiring you to solve their problems. He was told that his soul was filled with evil, will he clear his conscious or prove them right? 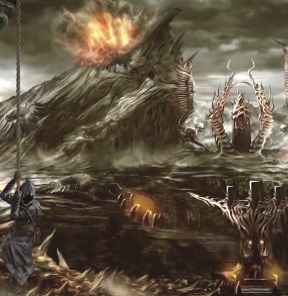 The artwork is what really sells this game. While nothing in the content really makes it a horror title, there is some very disturbing imagery. Even in the background there is something there that makes you feel unsettled. The only side-effect from this is it can be hard to see the exits on the screen. All places you can go are marked with a white simplistic arrow that fades in and out. Since in this game you don't move freely around the screen, just click on the spots you're interested in. If you can use it or pick it up, your cursor will change into a skeleton hand. If you can pick it up then it will be done so when you click on it. Other wise you'll just get a description. In order to use items you must click on your pack, click on the object to select and then click on what you use to use it on or give it to. This makes gameplay simple so you can really just enjoy the story, the art, and the amazing music, especially the track that plays during credits. Tormentum: Dark Sorrows will feel like at times it was just made to show off their great talent in the art department and honestly they do have great talent so you'll find yourself not minding one bit. Granted all the artwork is morbid and gives you a shiver in your spine, but an enjoyable kind of shiver.

There are quite a few moral decisions to make in this game, but only one or two come with moral ambiguity. In most cases, you'll only pick the wrong one if you accidentally misread the symbols. Still, it's nice to see the choice is given to you, since there are other points within the game where you'll wish you could have been part of the decision making. Besides the moral choices there are some other puzzles to be seen,, like placing the gears in the right spot to get the machine going, or sliding blocks around to complete a picture... you have to use your logic or the careful hints around the place to figure them out. This world is filled with interesting characters, both in design and personality. Everyone feels as if they had a full background to them, but you're only getting a small taste of their lives. There is a deep and rich past to the place your Hero finds himself, but you only get small pieces of it through scraps of paper found laying around, and it seems just as interesting at the characters who live there. The main focus is on your cloaked hero and what he must go through to find the place in his dreams.