If you love piling things on other things and then selling things out of those things, Nimblebit has you covered with Tiny Tower Vegas, free(mium) for iOS and Android. Though functionally mostly identical to Tiny Tower and its Sith-ier follow up Star Wars: Tiny Death Star, as the name implies, this installment has you building your very own tower in Vegas, which means casinos, lounges, and minigames, naturally. For those unfamiliar with the series, it's best described as an idle game of sorts, with some light simulation and resource management. You don't necessarily play it as much as you ensure it can keep running. You build new rooms when you have enough cash, hire employees to staff stock those rooms (ordering more merchandise when items run out), and perform mini-missions for your guests like tracking down items or booking rooms for their friends. The two main currencies are cash and "bux", both of which are generated/earned in game, as well as a new type of currency this time around... the chip. You earn chips either by completing missions or through random tips, and you spend them on playing the various casino minigames you unlock as you build your tower, which can in turn earn you some sweet, sweet cash. Think of it as a Tomogatchi... your interactions are limited, but you can't leave it alone forever either. 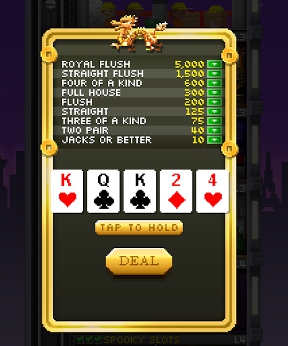 Tiny Tower Vegas is so like its predecessors that it won't do much to woo you if you didn't enjoy them, but Nimblebit have their formula of digital seahorse people down to a T. For the most part, Tiny Tower Vegas is relatively unobtrusive when it comes to its in-app purchase options, but there comes a point fairly early on where costs for building new floors jump alarmingly high with coins, while "bux" prices for new floors increment at much smaller amounts. You can, of course, still complete the entire game without paying a dime, since anything you pay money for is just going to be due to impatience. You'll need to baby your tower a lot in the beginning until you can afford to upgrade rooms enough that you're not constantly running out of things, and of course if you aren't actively playing, you're not going to get chips or any new VIPs or employees. The casino minigames tend to be fairly basic in a "spend a chip and cross your fingers" sort of way, so, uh... basically exactly like real casinos, I guess? (Ask me sometime to tell you the story about Freemont street and the nickles.)

Despite its relative simplicity, however, Tiny Tower Vegas is full of charm. BitBook updates and the rare "video" posts are as cute as ever while your visitors chatter and praise (or bash) your tower, though also occasionally mystifying... I placed an applicant in his "dream job" and he still posted a status complaining about how much he hated it, so basically he's lucky there's no "scrub urinals with toilet brush" option, ungrateful little punk. Each new floor is always lovingly detailed with colourful pixel art, and the sheer variety of locations will keep you busy for a good long while. Tiny Tower Vegas doesn't reinvent the wheels lovingly crafted from the first two games by any stretch of the definition, and whether you find it addicting or repetitive is largely going to be a matter of personal taste. Tiny Tower Vegas is more of the same with a few extra bits of razzle-dazzle and all the Nimblebit signature style you've come to expect, which isn't a bad thing at all. While some players might not find the minigames do enough to shake up the established formula, others will welcome another beautifully illustrated tower of virtual LARPers, Elvises, zombies, starlets, Stormtroopers, and much, much more.

I've been waiting for this one to drop for a while! Joined #JayIsClubs but it doesn't show if anyone else is in.

Interesting changes - many of the old Tiny Tower strategies don't apply very well, so it's a bit of a challenge to figure out new ones. Not sure if I want to keep all floors at equal levels or have some high and some not. (Managing bitizen jobs is another story.)

The high increase in coin costs for new floors is frustrating - I wonder how many Tiny Tower fans may leave this version because of this.

As for the special jobs, I don't think your name appears on the "friends club" list until you gamble on the required floor. Didn't get the right one, so my code doesn't appear on the list.

D'oh! Forgot about the "visit your friends" link - the 4 digit codes on the Friend's Club Leaderboard are friend codes... you can use them to visit other players' Towers and gamble at the appropriate casino (if they have one).

> JohnB— Star Wars: Tiny Death Star is what happens when LucasArts and NimbleBit conspire to steal all of your time. A casual simulation game at its core, Tiny Death Star is essentially a Star Wars-themed Tiny Tower with a handful of new features and some tweaks to the basic gameplay. Despite having an overzealous in-app purchasing system (don't panic when you see the prices in there), it still manages to hold onto that "just one more minute" style of gameplay that will occupy your brain even when you're not playing the game.  ...

> JohnB— From NimbleBit, the creators of Tiny Tower, comes the next game that's going to occupy bite-sized pieces of your time for the next several months. Pocket Planes is the team's latest offering in the casual simulation department, putting you in charge of airports and passengers, planes and people, and challenging you to make it all run smoothly and swiftly so you can, well, do it all on a much bigger scale. It's the perfect formula for a "just one more level" kind of game, and if you were one of the many souls who fell victim to Tiny Tower's amazing level of addictiveness, Pocket Planes might just hook you twice as hard.  ...

> HopefulNebula— First we managed a skycraper in Tiny Tower. Then we tried our hands at air traffic control in Pocket Planes. Now NimbleBit is turning us into train magnates with their newest simulation game, Pocket Trains, and it's just as brilliant and well-balanced as any of their other games.  ...

> JohnB— The latest release from Pocket Planes developer NimbleBit, Nimble Quest drops the simulation formula in favor of a good old fashioned arcade game. And we're not kidding when we say "old fashioned". Nimble Quest is essentially the 40 year old game of Snake with a layer of RPG elements and free to play features draped on top. It's a very different experience than, say, Tiny Tower, but it's got that same level of simple charm we've come to expect from the studio.  ...