The latest release from Pocket Planes developer NimbleBit, Nimble Quest drops the simulation formula in favor of a good old fashioned arcade game. And we're not kidding when we say "old fashioned". Nimble Quest is essentially the 40 year old game of Snake with a layer of RPG elements and free to play features draped on top. It's a very different experience than, say, Tiny Tower, but it's got that same level of simple charm we've come to expect from the studio. 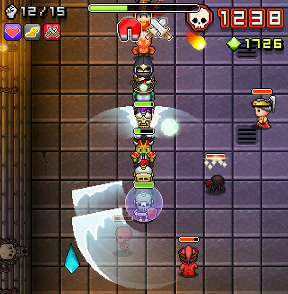 Nimble Quest places your party of as many as 15 characters in a long chain of adventurers who follow their leader without fail. Everyone marches around the arena automatically, you just swipe to change direction and avoid running into anything. Combat takes place when your characters are in range of an enemy. Melee attackers need to brush close by foes to get their swipes in, but ranged characters who shoot arrows, fireballs or bombs can attack from afar. Either way, you have to be very careful to approach enemies from the right direction, as they're moving around in snaking patterns, too, and will often change direction and crash right into you.

Enemies have strengths, weaknesses and special powers, such as heavily armored soldiers or spiders that slow you down with bits of gooey webbing. Defeated enemies often leave behind heroes you can recruit or drop items you can use, such as magnets, shields, bombs, ice blocks, health potions and more. Grab everything you can, as death in Nimble Quest sends you back to the very first stage and wipes your party clear of adventurers. Yikes. 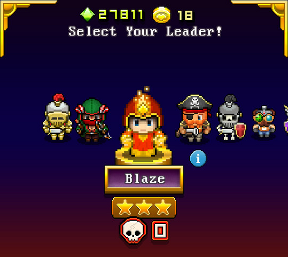 You'll deal with two forms of currency in Nimble Quest: gems and tokens. Gems are dropped by enemies and used to upgrade both individual items and different characters. Tokens can be spent to replay levels when you die, allowing you to avoid the inevitable cursing when you lose your progress because you smacked into a wall. They can also be spent to add heroes or buffs to your party at the beginning of a level. You can find tokens during regular play, but they're fairly rare and are spent much faster than earned.

Analysis: Nimble Quest seems like quite a departure for NimbleBit, but the studio has a track record of releasing games from several different genres. The most recent efforts have been simulations of one form or another, but there have been puzzle games, word games, arcade games, and even a racing game in the studio's past, so this little hybrid isn't that surprising. Nimble Quest quite effectively blends two well-known game types into something unique, and it's nice to see the instant gratification of an arcade game with long-term character development keeping you engaged for the duration. 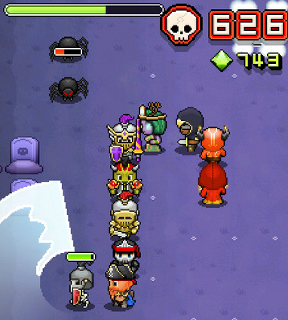 Ready for the bad news? Nimble Quest steps its toe over the line of fairness when it comes to implementing in-app purchases. It's not greedy by any means, and the fact that we mention it at all is more of a testament to NimbleBit's great track record with well-balanced microtransactions. Here, IAPs feel like a punishment. You made a mistake, your finger slipped, and you died. If you want to keep playing, pay some tokens. If you've already died on this stage the price dramatically increases. Don't have enough? Either buy some from the store or go back to level one with almost nothing to show for your effort. Even adding heroes or equipping buffs costs tokens, stopping short any effort you might make to give yourself a boost so you can survive longer next round. Progress in the game game feels like it's dependent upon spending tokens, and since the rate at which you find them in the game is so low, an imbalance is created that can quickly lead to frustration. It subsides somewhat as you continue to play, but it's palpably present from the beginning.

Apart from the IAP issues and the moderate awkwardness that can come from playing a game of reflexes with a touch screen, Nimble Quest manages to turn itself into a great game, especially later on when your party turns into an enormous chain of adventurers. It won't capture your attention as thoroughly as Pocket Planes, but it's a good one to keep around for quick pick up and play sessions.

I don't know if you're aware, but you can get free tokens on the token menu by watching a ~10 ad, and you can do this infinitely if you space those sessions out. I think that would address a lot of your concern with the gold necessity and IAP. If it helps, maybe a re-rate is in order? ;)

This game is awesome. Seriously one of the most fun I have played on Android, and I've played a lot. Controls are so intuitive and natural. Everything is really well balanced and everything just works. Personally, I thought the in-game purchase system was very fair - the game gives you loads of everything even if you don't pay, I bought in game coins just to support the developers of such spot on perfect old school goodness. Great controls, great variety, good concept well executed, overall 9/10!

I don�t know how many tokens you spend on stuff, but I only spend them on buffs(speed, dmg, atkspd, life), thats 4 tokens per game, and i usually find 6 or more tokens when i get to round 9 or 10. have around 200 tokens by now and nothing to do with them...

I am in love with this game! The pay to play ratio is perfection. I put a fiver down to get the 10x multiplier, and now I feel the game is rewarding me just the right amount without cheating.

What I would consider extremely ironic is that I would have paid 5 on xbla to buy this game in the first place. Now I get to level up faster, and experience less frustration. It feels like im playing the game it was meant to be played, and all I did was give you the money you deserve for making such a great game.

I said it give me my twenty dollars... just kidding :) I truly love this game. I just hope I dont run out of levels anytime soon.

SERIOUSLY I GAVE YOU MONEY! I really hope!!! it plays out. Once again I am enthralled. Great game!

You certainly have to be nimble to play this. I wasn't quite quick enough. I enjoyed it enough that I would say it is a good game. The game play was interesting, the power ups were decent and it was not too hard nor grinding to upgrade. If there was a final goal(boss or level) I did not find it because I was not quick enough; mostly I kept running head on into enemies.