First we managed a skyscraper in Tiny Tower. Then we tried our hand at air traffic control in Pocket Planes. Now NimbleBit is turning us into train magnates with their newest simulation game, Pocket Trains! 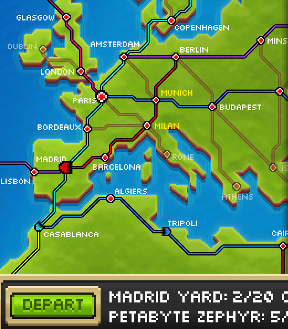 Gameplay is easy to pick up, especially for fans of Pocket Planes. You start with a few engines, cars, and cities, and build your empire bit by bit as you earn coins and make deliveries. There are extra challenges and special cargo that help you advance as well. In Pocket Trains each bit of track is "owned" by a single railroad, and it costs coins to claim tracks or change who owns it. This means you'll be dropping cars off a lot so you can get that hayride car from Minsk to Rome, and it means you get to create a brightly colored map of train routes just as gorgeous as the ones in every subway station. You also have to refuel your trains, which happens automatically as they idle in the stations.

As usual with NimbleBit's games, Pocket Planes' strength is in how well it scales. Prices increase at roughly the same rate as your income and you only see train parts that are appropriate for your level, meaning that it's nearly impossible to encounter a bottleneck where you need that new, shiny engine but it would take two weeks to earn the coins for it. You can speed things up in a variety of ways by buying Bux, but there are so many ways to earn Bux that there's no reason to spend real-life money for them if you don't want to. "Balance" would be the name of the game, if the game weren't already called Pocket Trains. There are a few features (Bitbook, social elements like Pocket Planes' flight crews) that don't exist in Pocket Trains (yet) but the game is so polished and shiny and funny that it's hard to even miss them.

Now if you'll excuse me, I have a train to catch, just as soon as I'm done deciding what cargo goes in it.

Pocket Trains strategy guide
Note: this guide is a work in progress; please feel free to add your own tips and tricks in the comments!

The Care and Feeding of Trains

The Menu Button (and the things it contains)

That's pretty much it for now; there's certain to be more advanced strategy as people advance futher. Again, feel free to chime in with any helpful tips you might have. Also feel free to comment with your gift code (found in the "options" section of the menu) to organize trades and such.

Thanks to HopefulNebula for the strategy guide!

I've been excited about this title since you guys tipped us to NimbleBit's announcement of it.

But if I pick it up, I'm going to want to also start tending to my neglected Pocket Planes airline again.

And I already have to deal with my lambdamu Pixel People, and who knows when I'm going to finish up sailing around Kairosoft's Beastie Bay (not to mention the incredible backlog of other Kairosoft titles).

There isn't enough time in the day to deal with all these casual simulations. :(

Pocket Trains strategy guide
Note: this guide is a work in progress; please feel free to add your own tips and tricks in the comments!

The Care and Feeding of Trains

The Menu Button (and the things it contains)

That's pretty much it for now; there's certain to be more advanced strategy as people advance futher. Again, feel free to chime in with any helpful tips you might have. Also feel free to comment with your gift code (found in the "options" section of the menu) to organize trades and such.

Thanks to HopefulNebula for the strategy guide!

I am enjoying this game except for train breakdowns. I was worried I'd run out of parts fixing all the trains and I didn't want to spend coins to fix anything, so I found an awesome solution: I just keep it broken. So what if a route takes 15 minutes instead of 7?

When my lines start intersecting continents, maybe I'll feel differently, but I'm casual enough in this game that the longer wait frees me from sitting and watching the trains.

hey looking for metro, national express parts. or any train parts that you dont need, my GC is Zultanite12

One tiny comment about the walkthrough. It states that "The more you upgrade a train station, the bigger its dot is on the map." I don't think that's actually true. The dots on the map that are bigger are the ones where there are jobs waiting to be picked up.

On the article screenshot, Paris has a bigger dot. That could happen when a job was picked up in Amsterdam, but needs to go to Glasgow. It was taken along the light blue line to Paris, and is waiting for the magenta line to pick it up.

I've found that the stations I upgrade tend to be the ones that have waiting jobs, but once those waiting jobs get moved out, the dot shrinks back down.

It's a useful indicator when you're looking at the main map because you can find out where you might've forgotten about a stranded job.

hey need some train parts my gift code is L9NY

Hey have some stuff to trade. looking for regional,metro, and global express parts. i have up for grabs an rio grande part or 2dragonbreath parts. mesage me or whatevs my Gift code is L6NY. and any parts u dont want throw them this way :) thanks

Andrew, you're absolutely right! The only large stations on my map were the ones I had upgraded, and I made the wrong assumption. I'll edit that in the next version of the strategy guide. :) Thanks for letting me know.

ZFM4 GIFT CODE, would appreciate extra gifts you may have. Thanks

I have express parts of all types up for trade. Also will trade Zephyr or Standard parts for Mallard, Daylight or Century Limited.

Ask me for what you need

I have both Peta and Tera Zephyr parts. Also have Dragon. Breath parts.

Could use Mallard, Daylight or Century Limited parts.

Golden, how about 3 dragon breath for my 3 mallard?

2 Tera for 2 of my century limited. My code is 3HBP

Let me know if that is good and your code

Can we do the trade above?

Both trades sound good to me. We have traded before gift code is Q7VF.

Volen, I will be rising in the morning and doing my gifting. Thanks

Would you like a daylight to make up for it?

A Daylight sounds fine to me.

Daylight sent. Please let me know when you have everything

What do you have to trade?

Have a dragon breath part, a couple carbon steamers, emerald and global parts, if you would like to �exchange� the code is K3WX Thanks!!!!!!

ALSO, WILL TRADE SEVERAL Terabyte Zephyr parts and the Standard series parts for Century Limited and Daylight Parts (preferibly Century, but obviously still appreciated for either!!!!! ????)

What are wanting for the Carbons?

Im online 1 or 2 times a day. And any donation are always accepted.

Has anyone actually bought one of the $40,000 crates? Is whatever inside worth that?

Your Carbons are too expensive for me.

Would you take a regional express for your carbon?

I have spent money on the special purple crates located at random stations before. The price goes up for them as you levels up. The first I bought was about 32K. Now they are about 42K. I am at level 22 or 23. The purple crate is just the same as the ones you get for completing missions or gaining levels. It is totally random. I don't spend money on them anymore because they are too expensive.

Do you still have the Pecos for trade? What do you need for them? Maybe we can deal. Gift code Q7VF

So actually I have nine Pecos parts, 4 for 2, I give you for 4 Pecos, you give me 2 Century Limited?

Sorry I need my Centuries more than I need the Pecos

I have the Gila, Rio, San Juan and several of the Zyphers you are looking to find. Gift code Q7VF.

I have fuel cars but I never see them available in my train stations. How do I add them to my trains? Thanks in advance! I am only level 15.
Tony

What do you all need out there?

Also from a strategy angle does it make sense for me to take all my old steamer parts that I will use and craft them and sell them for the cash?

To add a fuel car to a train, that train must be in a station. On the station screen, press the button marked "train". There will be another button that says "Fuel Car 0/1" (Or similar). Press that, and you'll be prompted to add a corresponding fuel car from your yard. Note that the fuel car has to be the same type as the engine.

can anyone help? What do you need?

Hope someone can give me 1 GILA STANDARD part, my gift code is 4BX1P, Many thanks in advance!

Today is the day I need to get my 3 Century parts!

What do you all need out there?

Completing my final round of building, I have Mallards, Daylights, Deketoras, Exabyte, Gila, Zettabyte, as well as the expresses, steamers and dragonbreath

Hello, I'm just approaching level 21 and I'm becoming increasingly frustrated at the number of basic steamer parts I'm getting from "Special purple crates". I was under the impression the special crates gave only special train parts. Is this a glitch or the way it's meant to be? Thanks in advance