Star Wars: Tiny Death Star is what happens when LucasArts and NimbleBit conspire to steal all of your time. A casual simulation game at its core, Tiny Death Star is essentially a Star Wars-themed Tiny Tower with a handful of new features and some tweaks to the basic gameplay. Despite having an overzealous in-app purchasing system (don't panic when you see the prices in there), it still manages to hold onto that "just one more minute" style of gameplay that will occupy your brain even when you're not playing. 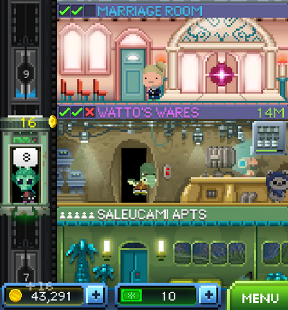 The core of Star Wars: Tiny Death Star focuses on building the Death Star one level at a time. The Emperor and Lord Vader chatter back and forth on occasion, giving you missions to complete in exchange for small rewards, but otherwise it's just you and a tower of shops to manage. Build over half a dozen types of floors, ranging from retail to food, residential and service-oriented businesses. After waiting out the real-time clock, give residents jobs in these shops, tapping each one to start researching a product to put up for sale. Once that real-time clock has expired, go back, stock the shelves, then wait while the Death Star's inhabitants come in and spend their hard-earned cash. Repeat until your mobile device is obsolete and your Death Star tower reaches infinity.

New in Star Wars: Tiny Death Star is the addition of underground levels. These evil floors serve as research facilities for Imperial workers. Commerce doesn't go on on minus levels, but you'll tackle some more important things such as, oh, crushing the Rebel scum with raw Imperial might. 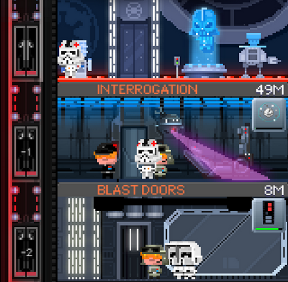 Analysis: Tiny Tower with Star Wars characters and settings? That came out of nowhere! We're certainly not complaining, though, as building the Death Star is something we've wanted to concern ourselves with ever since that scene in Clerks graced movie theaters. It's a strangely natural fit combining it with NimbleBit's Tiny Tower property, and seeing all those cute Gunguns and Toydarians and whatnot patiently riding the elevator as you take them to the cantina is totally worth it. The writing and references are a little on the hokey side, which fits the theme but sort of makes it feel like a Robot Chicken parody of Star Wars. Still: don't care, Star Wars Tiny Tower.

The original Tiny Tower had a simple microtransaction system where you could spend some cash to grab a few bux, useful for speeding up stocking, selling, construction and the like as well as buying faster elevators. All of that stuff is still the case with Star Wars: Tiny Death Star, but with the new features bux are spent much faster than before. The result is a more, shall we say, full featured in-app purchase store. You can play the patience game and fill your Imperial Bux on your own, but that takes a lot of time and keeps you from seeing most of the new features the game has in store. It's a bit of a letdown, but it doesn't spoil the core of the game, fortunately.

Star Wars: Tiny Death Star takes a tiny step over the line when it comes to microtransaction-fueled features vs. honest gameplay additions, but it doesn't throw its entire self over to the Dark Side. Instead, we're left with a game that still has the heart and soul of Tiny Tower, comes with a tasty Star Wars flavoring on top, but contains the occasional sour grape that is a ridiculous in-app purchase. It'll sting to see the prices in the store, but this is still Star Wars meets Tiny Tower, so you really won't mind.

How is this game incompatible with a Galaxy S2 running Android 4.0.4?

New features in Star Wars: Tiny Death Star include the ability to store VIP visitors for later use, just in case they aren't needed when they appear, and the option to build a specific shop instead of rolling the dice to see which shop appears once your new floor is complete.
Just a heads-up: both those features have been added to the original Tiny Tower since its release.

There have been some strange incompatibility reports with this game, even among iOS users. No idea how Disney could mess that up.