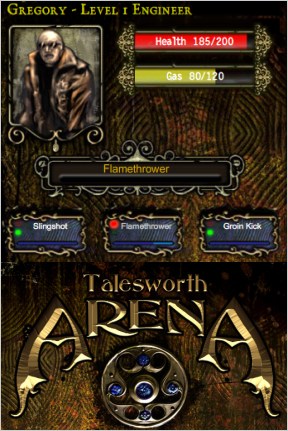 Talesworth Arena: Death Watch, by Sean Gailey (Mr. Jinx), is an RPG with a strong focus on one-on-one combat and a cool industrial fantasy setting. Choose one of three characters — Engineer, Psionic, or Juggernaut — and battle your way through 10 levels of deadly gladiators. The combat system will be familiar to anyone who has played World of Warcraft or similar MMORPGS. Your weapons and techniques each take the form of a clickable button, with its own casting delay and recharge period. Just click on the buttons with appropriate timing to defeat your opponent. The cash you win can be traded at the Training Center for new combat moves, or at the Bazaar for magical stat-enhancing artifacts.

What makes Talesworth noteworthy is the finely-balanced puzzle aspect to the gameplay. After the first level, which acts as a training period, you'll face opponents with deadly techniques that will wreck you if you let them resolve. You'll have to arm yourself with moves that can interrupt and cancel the incoming pummeling. Of course, your foes will start showing up with interrupts to cancel out your own killer moves. Each battle becomes an intriguing web of tempo, reflexes, and strategy. And right when you think you've got the game figured out, watch what the 2nd boss does to your battle grid.

Analysis: Talesworth Arena has top-quality production, with gorgeous character portraits and music that sets the mood perfectly. I would have liked a wider selection of sound effects in battle, though, and I hope that the sequel includes some animation. A simple but well-written plotline and a handful of side quests round out the package.

The engineer is probably the easiest character to start with, since he gets a hair-trigger interrupt move right away, and the first version of Talesworth was balanced around him. You think you can make it to the end and defeat Klax, the Arena Master? Better polish up that flame-thrower! And remember: don't blow your money at the Bazaar until you're sure you've got all the training you need.

Completely impossible to play on my MacBook.

I was enjoying myself until about level 4, then I got pummelled mercilessly, and got bored.

"Lar" worked for me.

Has anyone reached level 5?
I'm stuck in the forest quest.

It cannot make out the map. It's possible to go always North! I cannot find a padron here

A few tips for beginners

I'm stuck with you Frank, tried making a map, but it doesn't help much.

I thought this was called "Death Watch"

Got the forest thing:

You are, of course, correct, Sloth. I've updated the review.

Tips for the forest quest:

Making a map (in the usual sense) will be kind of hard, since the forest sort of wraps around on itself, so you can (for example) go north twice and end up in the same location.

Instead make a list of all the locations (each one has a different description when you get there) and where each direction will take you from that location. Then it's just a matter of making sure you have every place fully explored.

I forget the exact directions, but this should help.

A little bit of searching on google will find all the quest-related questions resolved for you. Even the maze to find the dog.

Most important is to pay attention to the skills you have and the advantages afforded by gear. +1sec to stun and -cast time/cooldown time are imperative.

Also, don't get frustrated with how difficult everyone seems to have found Psionicist. He's actually extremely easy to play as, provided you don't give up the first time you get pounded.

Every class has its own 'combo' - a series of abilities with jibing cooldowns. Find it and you basically win every single round.

Also, when you get to the final boss

DO NOT FORGET to equip the hat you got way earlier, or his Damage Over Time spell that he casts before the fight begins will make it so you CANNOT win.

What this game really misses is the ability to rearrange your skill buttons.

Otherwise I played it through 3 times with all classes and really liked it. Once in a while with this game I got a real combat that really is interesting beyond the paper-stone-scissors mechanics.

Retrospective I liked the psych at most. I guess he is quite a challenge in the mid of the game, but later on, he really gets very powerfull. As the cooldown time of the wall of atoms gets lower and lower, and combined with a little knowledge to notice when your enemy will attack, you are close to invulnerable. However the easist was IMHO the juggernaut, because he can take a lot and deal a lot, you need the slowest thinking yourself with him, but I just don't like his style that much. The engineer is most handy since he got 2 interrupts. However running out of gas can be a real pain.

Here are some spoilers for the quests after going through this game once (Very fun!)

Guy offering 500g for the ogre:

Charge through the rubble, then dodge under the legs

I played it on a Macbook...

Pretty fun. Easy mode is really short, and Normal mode is merciless. Naturally since I'm a wimp and am using a touchpad I only finished the Easy one. Cool class designs, although all of their moves are very similar, so the strategy doesn't change much for any of them.

Click the top option until the description says you're nearby, then go East

I got to level 4 then it was to impossible to beat the boss, something between 15 and 20 rounds with defeat. Then I gave up. Advice to the game developer. You need to balance the hard ship.

I also had difficulty getting it to work on Firefox 3.03 on a MacBook Pro. The combat was never broken, but I was unable to purchase anything from the Bazaar, and when I leveled, I suddenly could not purchase new skills/spells at the Training Ground either. Also, the page navigation on both "store" screens did not work (i.e. clicking next did not scroll me to the next set of skills/artifacts).

Frustrating, because this is otherwise a pretty cool game. I wonder if my Flash Player needs updating?

I had a TON of fun playing this game! :) I played as an engineer.

Easiest way to win as engineer:

Use Groin Kick before they get a chance to use anything. This does not work on anything that has a Reflect ability - but they always use their reflect ability as one of their first attacks. After the Reflect wears off, use the Groin Kick on them. :)

When you run into the drunkard, beat him up to get an extra rune in the end. Also, in the last level, SAVE YOUR RUNES so you don't end up getting all the crappy abilities instead of the ones that matter, like Fire Beetles. :(

Keep a goood eye on your best and ready moves.

just press first option constantly untill in the message that comes up says something about you hearing a noise, then go east

I clicked on the start combat button and was waiting for the screen to change to a combat screen. Nope, you're supposed to fight right from what looks like the skills menu. That was a bit confusing, to say the least.

I tried playing on Easy, with a Psionic, but despite making it through the first five levels fairly handily, I got stuck on the 6th both (Jingles). No strategy I've tried seems to work against him. I tried saving my interrupt for when he uses his Healing Potion, because I thought that was what was killing me. Turns out it's not any single thing that is getting me, it's everything--I think I'm doing OK and then I look up and I have 5 hit points left.

So, it was fun while it lasted, but getting beaten a dozen times in a row (after not having suffered a single defeat previously) and having no idea what to do stops being fun.

What shell should I choose?

Personally, I found easy to be pretty...well, easy (and I played as a Psion). It helps if you do a bit of gold farming, so that you have the most up-to-date skills and especially weapons. My number one piece of advice for a Psion is to keep hitting with both your weapon attack and Torment. Psychic blast in the beginning is nice, and after that try save it for strategic instances - but don't just leave it sitting there for too long. Wall of Atoms is really useful as well. Equipment is nice, I guess, but except if you get something that extends stuns I don't think it's terribly important.

How to kill Krax (when he cheats) i can't do anything about it. I'm Playing as an Engineer

For Jingles you just have to stun him at the start before he can use jinglestick. I'm a level 9 psionic. I can't get past the chimeras. The hard one would be the 2nd boss, belzar. you save the interupt for his healing spell.

Do kill her and later on choose to lead the Crimson Brotherhood. You will get 500 gold and 2 runes

I'm playing as a Juggernaut and it's awesome because he has uber hp and can deal lots. But I'm stuck on how to use runes. I got one rune after beating up the drunkard but I don't know what to do with it.

I just played through as an engineer on normal mode and thought the difficulty curve was dead on. I work for a college specializing in gaming and was really really impressed by the fact that a casual game like this has such a great mixture of good story-telling and really solid gameplay. Very well done!

There are 17 runes scattered thro.ughout the game and if you get them all you will only be three runes shy of upgrading everything in the black market.

I beat the whole game in one day as an engineer

Hi im stuck on one thing: Im a level 6 engineer, and I only have one rune! I feel left out now that I have the black market, so can someone tell me where the others are?

i applaud the game maker for such a great game. played psionic, awesome. dont fall behind though, or ur toast. the first fight in every section is the hardest, once you unlock a new ability its doable. stun is king. have fun everyone!

Use the green shell