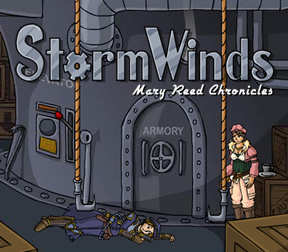 Ah, the world of Storm Winds. Some of you are getting flashbacks just reading that title. Your head is swimming with fixed cannons firing endlessly as wave after wave of strange flying machines bare down on you. Right now you're just waiting for me to tell you how awesome the game is so you can get to some hot, steampunk-esque defense action. Well, it's time for the old good news/bad news thing. Bad news is that this isn't your normal Storm Winds game, it's a point-and-click adventure. The good news is that Storm Winds: The Mary Reed Chronicles is just as well made as the other entries in the Storm Winds series.

The Mary Reed Chronicles puts you in the shoes of Mary Reed as she tries to rescue Princess Ann from a Demon airship (for non-Storm Winds fans, that's not demon as in monsters, but Demons as in people from Demo). You'll use your mouse to interact with the environment. Along with the puzzles, you'll also be doing some point-and-click gun slinging. When the time comes just click on the enemy you want to take down and Mary Reed will take care of the rest. 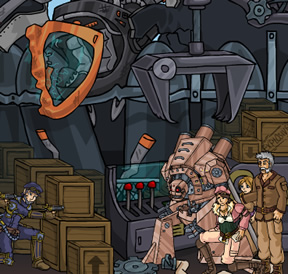 The Mary Reed Chronicles isn't a very long game, but it is good, especially considering this is Hero Interactive's first foray into point-and-click adventure. The puzzles aren't extremely tough, but there will be times when you'll have to take some time to think about what to do next and there's not a lot of item combing. However, this keeps things moving and with the gun play it makes the game into something like a fast-paced action point-and-click adventure. You'll be doing quite a bit of shooting, which will appeal to those who are tired of the more cutesy kind of point-and-click. You'll be spilling a lot of blood on your way to find Princess Anne. There is some extra content in the way of an alternate ending that you can unlock by finding all the hidden letters.

The game looks pretty good and it has a distinct style. It seems brighter and cleaner compared to the style present in the Storm Winds defense games. While it might have been nice to have some of that grit here, it doesn't detract at all. On the sound front, the sound effects are good, but what's odd is that there's not much music while you're playing through the game. While this won't bother anyone who usually turns off music in a game, it would be nice to have a little bit of a score during some of the more exciting scenes in the game to compliment the action.

Storm Winds: The Mary Reed Chronicles is a quick, fun adventure game. It will especially appeal to those who have always wanted to get into the Storm Winds universe, but aren't very good with defense games or defense game junkies who don't usually like adventure games. Hardcore point-and-click fans won't find a lot of meat here, but it's still worth a play, particularly if you've been looking for a point-and-click with some blood in it. Whether you're a fan of Storm Winds or not, The Mary Reed Chronicles is worth playing.

Is accessed during the End Game portion, after you shoot the two soldiers and go below decks

Fixed! Thanks for pointing that out.

Is accessed during the End Game portion, after you shoot the two soldiers and go below decks

If you don't click Rusty quickly enough during the shootout, you seem to be stuck and can't move forward in the game. Bug?

Do you mean the part of the shootout where you set the guy on fire and then Rusty knocks him into the explosives? All that happened to me if I didn't click Rusty fast enough someone would come and hose down the flaming soldier. Then you could try again. I never got stuck though

Same problem here. Needed to hit menu and go back. Then, it worked.

The tag link in the review still doesn't *quite* work. It says tag/stormwinds/ instead of tag/stormwinds and the extra slash is confusing the server...

Thanks, Sam, it looks to be working now.

Didn't Hero Interactive do a BUNCH of point-and-click for little kids a few years back? I played round after round of "Putt-Putt Saves the Zoo" and "Freddy the Fish" with my kiddo, and I seem to recall it being under the Hero banner.

The Hero Interactive site doesn't show any point and click games. "Putt Putt Saves the Zoo" and Freddi Fish were made by Humongous and came out in the early 90s.

Oh my gosh, memories of wasting time on the library computers playing Putt-Putt and Freddi the Fish instead of doing homework. I think they were the first point-and-clicks I ever played. Honk for Putt-Putt! (And, um, Glug for Freddi?)

Huh, I didn't know that Putt-Putt saves the zoo (Pousse-pousse sauve le zoo in french) was an english game when I used to play.

Btw, I don't have sound in the game, is this normal ?

I like how steampunkt is progressive on the picture of gender. As you notice women are in this genre often brave heroines instead as depicted screaming princesses just sitting there in their pink dresses in some evil castles to be saved.