I don't much care for werewolves. You may blame this opinion on my affiliation with the Camarilla, or it could be because once upon a time Jack Nicholson took it upon himself to see if it was actually possible to bore me to death. Whatever the case, I was glad to see that the hidden-object adventure title, Shadow Wolf Mysteries: Curse of the Full Moon by your friend and mine ERS Game Studio portrays werewolves like the jerks of the forest they are rather than steamy hunks of animal magnetism. You are a supernatural expert (I know, it was a surprise to me too) called in to a small village after a strong of murders and disappearances. The people begin to be convinced a werewolf is stalking the streets at night. Could it be true? Or could it have something to do with the nearby circus, whose "trained" wolf has now fallen under suspicion? 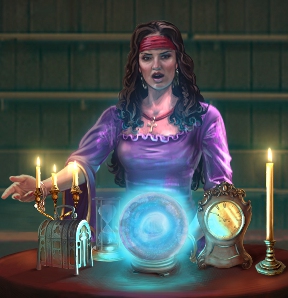 If you've played any game in the massive stable of hidden-object adventure titles, you know the drill already. Examine your environment for clues, using your mouse to interact with objects, and solve puzzles and hidden-object scenes to progress. You'll actually encounter a large number of puzzles over the course of the game; click on "help" at the bottom of the screen for each to get directions, or wait for the "skip" button in the lower right corner to recharge if you scorn such activities. Just make sure to check your journal frequently, since it not only keeps track of what you should be doing, but also provides a lot more insight into your actions than the in-game dialogue does; it won't convince you that sawing through a wolf cage is a logical thing to do, but at least you'll know why you're being forced to do it.

Analysis: ERS Game Studio isn't only a prolific developer, they're shaping up to be an extremely reliable one as well; you can count on them to release games on a regular basis that as a whole are usually very good. While their games have always played very well and looked quite good, Shadow Wolf Mysteries is actually a step above their previous offerings in terms of quality. Characters all have voice actors (some better than others) and are animated, and the environments themselves, still beautifully drawn, are now also filled with a lot more subtle movement and action that gives them more depth than a storybook picture. This may seem like a strange thing to notice, but the UI is also very well done; something about the way the object list resembles a coarse block of wood, the item names struck out with rough gouges, just adds perfectly to the whole package. 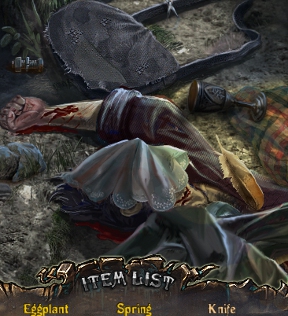 While initially the gameplay starts out almost condescendingly easy, things do increase in complexity the more you play. It's unlikely that you'll find any of it particularly challenging, it still does a good job of keeping you engaged and presents a surprising amount of varied puzzles. The story here is also a lot stronger than you might expect for the genre; it won't shock or even really surprise you, but the pacing is good, everything makes sense, and the gameplay is fairly engaging and actually feels like it's part of the narrative rather than being a horse and buggy that just drives you to a series of flat cutscenes. One thing that is mildly annoying is that you do have to keep up on your journal entries; it's not that they're troublesome to read, it's more that they have a tendency to inform you of things the dialogue does not. At one point the journal informs you that you should be looking for a woman named Alice and recounts information Madlen "told" you in your previous conversation, even though she never mentioned any of the specifics or incidents the journal somehow knows about. It feels a little sloppy and disjointed, and to be frank, I expected better.

Shadow Wolf Mysteries: Curse of the Full Moon is simply an all-around solid and enjoyable title with few strikes against it and a lot to recommend. Veterans may find themselves disappointed by the relatively low level of difficulty, but if you're just looking for something well-made and fun, this will certainly provide. The story takes you to a variety of locations, and the changing scenery and little plot twists keep the story from becoming stale or too predictable. It's like following a trail of Reese's Pieces; tasty and satisfying, but at the end you're stuck in a box with James Woods and... uh... hm. I forget where I was going with that. The game should run you around five to six hours if you go at a steady pace and don't skip any puzzles. With a lot of quality and content, this game comes easily recommended, and fans of hidden-object adventures definitely need to check out the demo. ERS Game Studio is a developer to watch out for.