Idengames proved their talent with Royal Warfare, a truly exceptional defense strategy game that managed to cram all the thrills of real time combat in. Well the sequel, Royal Squad, is where the studio really gets to test their mettle. Simply put, the game is a stellar little adventure in arrow-shooting, goblin-stomping, magic-casting goodness. You select your roster of soldiers before each encounter and watch them chop down some truly impressive hordes of enemies as they march towards you in waves. For some added micromanagement, simply click to command your archers to rain arrows on a specific spot, or deploy some lightning bolts, bear traps, or swordsman onto the field for maximum effect. Chopping through the masses of necromancers, soldiers, and goblins as they come pouring towards you is supremely satisfying but be warned: this game isn't afraid to throw some curve-balls when you least expect them. 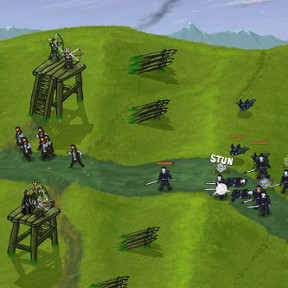 The gameplay of Royal Squad is stellar, with some truly clever writing coming as a welcome bonus. Let's be honest, defense games aren't always known for their wit, but Royal Squad should offer at least a few chuckles, especially from your sneeze-prone ally, Corwynus. You can purchase upgrades with the stars you earn for each successful encounter, all of which have measurable effects on each skirmish. Whether you're deploying snipers for their stun-inducing head shots or black mages for their devastating short-range blasts, each battle evolves organically with plenty of thrills. Some levels include bonus objectives, such as making sure survivors make it to the barricade unharmed, forcing you to deploy your traps more carefully as the horde encroaches. Are there any downsides to Royal Squad? Well, not really. Perhaps it's a bit easy to start but if you're more than welcome to try the challenge mode if you don't feel you're being tested. It's one of the best games of its type that's hit the web for some time. It's challenging, fun, satisfying, and fair, a glorious piece of craftsmanship that makes us eager to try out whatever this studio churns out next. Don't believe us? Grab your bow and few million arrows and check out Royal Squad yourself.

I don't know about anyone else but a bit more than halfway through the game suddenly changed all of my progress so that while I had really only gotten to level 7 and was working through the challenge and hard levels to increase my star count, all of a sudden my progress showed that I had played all 12 levels at least up to the challenge level... Very strange.

5,063 Views
0 Comments
chrpa— Jayisgames needs your help to continue providing quality content. Click for details Welcome to Weekday Puzzle! We start with bitmagine Studio's platformer. Your goal is to help a blob whose partner got imprisoned in a cage. There is a...  ...