Today, on "Well, What Did You THINK Was Gonna Happen?", the people of the fantasy kingdom in Idengames' realtime strategy defense game Royal Warfare react to the sudden appearance of zombies and skeletons everywhere by putting them to use as cheap manual labor. I mean, what could go wrong, right? But, shockingly, once the powerful undead were everywhere across the land, they turned on their tasty (itchy) human masters, and were assimilated into an army by the evil Darth Lords. Surprisingly, as the game begins, you assume control of the remnants of the royal army not to attempt to rout the evil forces, but to get the heck out of Dodge. (Hey, all those civilians can totally fend for themselves, right?) In each level, your job is to keep enemies from both killing your men and reaching the other side of the field... each fallen soldier and escaped enemy costs you one heart, and if all your hearts are lost, it's game over, man. Click to direct your soldiers around the battlefield, either selecting targets manually or allowing your army to attack whatever comes within range. You can direct and issue commands while paused, too. With the case you get from fallen foes, you can hire more units between enemy waves. Different soldier types have unique abilities, and as you play, you can not only improve those abilities, but unlock more, and more unit types as well. 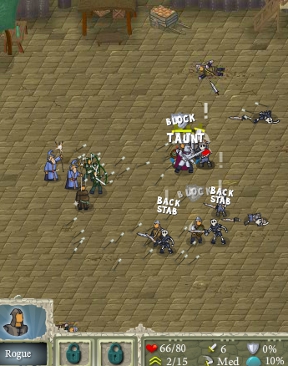 Royal Warfare doesn't really do anything particularly unique as far as its basic gameplay mechanics go, but what's surprising is how much there is going on under the hood. There are a lot of advanced commands you can use to direct your army and its formations, units can be leveled up with experience as they slay enemies, and statistics like magic resistance, armor piercing, and attack speed are important in directing your troops in later levels. You'll get special attacks with cool-down timers you can use to manually bring the pain to large groups of enemies, but friendly fire is possible so you can just plonk down volleys of arrows willy-nilly. Formation and placement is everything when it comes to survival, especially since some levels restrict your ability to purchase more units, or even what kind of soldiers you can use, and it makes the game a lot more strategic than just mindlessly swamping enemies with sheer numbers. Certain enemies pack a big punch or can simply make your life miserable with spells or resurrections, so figuring out what unit of your own is best suited to deal with them quickly makes a big difference. It's a game that feels well thought out from just about every angle, with an eye towards genuine strategy and keeping you engaged as each level feels distinct. It's not as immediately addictive as, say, Kingdom Rush, or as colourful and quirky, making it one of those games that takes a while to really grab hold of you. But if you like your defense games smart and full of challenge, Royal Warfare is a no brainer recommendation. And for the love of Luna, the next time you see a zombie wandering around your backyard, don't put it to work... hit it with your cricket bat!

Maybe I'm not braining today, how do you select for upgrades without moving the unit?

You can click the golden arrows from the toolbar at the bottom to cycle through the available units who have upgrades pending. Once you find the one you want, click their portrait, and then click the portrait that pops out above that one representing the upgraded unit type. :)