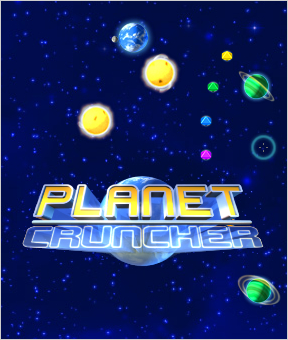 Planet Cruncher, from the fine folks at Rock Solid Arcade who brought us Stunt Pilot, lets you satisfy your appetite for destruction by casting you as an omnipotent exterminator of worlds. It doesn't exactly feel like a game about the deaths of billions, encased as it is in a shell of relaxing arcadey puzzle gameplay. But sometimes you have to play a game in your own way, and I choose to play this one while cackling maniacally and stroking an imaginary long-haired white star-cat named Lord Galaxathon.

Your goal in Planet Cruncher is to collect a certain number of crystals on each level by smashing together planets of the same type. As in Loop or Floats, you must capture groups of identical objects by drawing loops around them with the mouse. The more heavenly bodies you encircle at one time, the more goodies the resulting explosion releases. Collect the spiral of scattering crystals by simply touching them with the mouse.

Encircle at least four planets at once to produce a special bonus planet that will double the crystal output of any matched set you include it in. Accidentally loop mismatched objects together, and you'll create a black hole, which will meander around eating planets until you can circle it again. Twice per level, a comet will shoot by. Touch it to produce a quick additional reward of crystals.

At first, the planets will sit in place, easy prey for your magnetic universe crayon of doom. But before long, you'll be faced with screenfuls of bouncing planets in three different varieties. If a planet comes in contact with an outline as you are drawing it, it will explode, taking your unfinished loop with it. The tragedy of that is now you have one less world to mine for crystals, making it that much harder to reach quota. If you fail to fill the crystal bar at the top of the screen, your game is over, presumably because your cosmic gambling debts have caught up to you.

Although you may initially be tempted to play Planet Cruncher with gusto, making quick circles and taking opportunities where you find them, you'll probably run out of steam once the level quotas get higher. Eventually, you'll need to take advantage of the 2 x bonus planets and avoid needlessly sacrificing individual worlds to your impetuous whims. Rock Solid Arcade has chosen not to include a time limit, so your score will be better served by patience. It works best to sit back and ponder the situation, literally waiting for the planets to align before you strike, serving your justice cold, just like a good vengeful almighty being should.

Analysis: Planet Cruncher's presentation is up to Rock Solid's usual high standards, with clean, professional artwork and sound effects. The static background could use some animation — twinkling stars, slowly rotating nebulas, that sort of thing — but there's plenty of colorful orbs to attract your eye anyway.

The pacing is quite slow for what is ostensibly an arcade game, but there's a pleasant awareness to be found here, once the requirements get more demanding and every move has consequences. In order to do well, you'll need to spend a lot of time just watching and hoping for like planets to group together of their own accord. It's a nice time to pet the cat and do some cackling. Comets sometimes break up the silence, but otherwise this is a calming experience, if you're an untroubled planet-smasher. It's an arcade game for the quiet mind.

Unfortunately, Planet Cruncher peters out after a while. The crystal quotas keep getting higher, but there aren't any new concepts after the first few stages, although there are some fast-paced bonus levels. There isn't ever even a new background. And therefore, there is slim incentive to continue, once you've more or less mastered the technique.

Which brings me back to completing the picture by providing my own megalomaniacal back-story. I'll feast upon your immortal souls, insignificant denizens of Saturn! Bam! Smash! Mwaaahahahahahahaa!

I was going to suggest this after you put stunt pilot on.

Its quite a cool little game - Not one for a quick go as its reasonably easy skill level and in later levels you have to be a zen master waiting for the planets to group up! :0)

Mixing the planets causes a blackhole which starts sucking up other planets! Circle it to kill it.
If you can make sure you get at least a 3 or 4 planet grouping you'll get a X2 modifier.
Self explanitory really however the good way I found was to try to group up all the planets except leaving one type untouched (and preferably a X2 modifier). Then the last move is to circle all of the planets and the modifier in one hit - great for bonuses.

As fun as this game is, it did get boring quickly. When three of the same planets are going in completely different directions, and you realize that you only have one of the other kind left, it made me stop singing the Katamari Fugue and start wondering, say, what the workout lady ad's doing on a web site full of Flash games.

As with most other kinds of supervillainy, you have to both look and plan ahead at everywhere on the map at once, be patient while everything arranges itself, then suddenly find yourself foiled when something bumps into something else and throws everything off-course. Curses. It is fun to begin with, but the game itself didn't offer much to keep my sustained interest.

I really like the idea of this game, but I feel the execution could have been better. Specifically, I'd like to see the loops I draw auto-complete instead of requiring me to make sure the line intersects with itself.

With auto-complete, the task of drawing loops would become virtually effortless, allowing the player to focus more on playing the game and having fun with it.

Has anybody done a game like this with auto-complete? I know Floats requires you to close the loops just like this one, and I'm pretty sure Loop did, too.

I must say I agree wholeheartedly with your second to last paragraph, Psychotronic. The mechanic...or rather its implementation here, seems somewhat clunky as well...I guess that may have something to do with the way planets explode when they hit the edge of a loop, a feature that makes this a much quicker, intense version of Loop and such. The change somehow doesn't translate well, however. Less engaging, I guess.
As a side note, I would totally name a cat Lord Galaxathon if I ever bought one. Realizing this made me glad I am allergic to cats.

Though on second thought, I guess my assessment of the game has a lot to do with my unwillingness to wait for the planets to group up. Heh.

It seems a similar trait with all their current games I think...

The presentation, and the game mechanics are polished and generally very well done. They just seem to be missing that little extra spark that turns a good game into a great game.

1224600 at level 35 and im glad it ended there as it seemed to go on forever. Anyone know how many levels there are for this game?

I enjoy playing with the opening screen. You can push around the bouncing planets and make the comets explode.
It has a nice color scheme, but I agree that a twinkling, "active" background would really add something to the aesthetic without being distracting.

I really like the fact that the levels have no time limit, but I think that an optional time limit could add to the challenge of the game.

I like the technique that kule mentioned. In fact, I used that (only I thought of it myself) for a lot of the game after the green planets appeared. I would get a X2 multiplier at the beginning of the level, then count how much of each kind of planet were left. Then, I destroyed all of the two other groups, leaving the group that originally had the most with the X2 from the beginning of the game.

Playing this game makes me feel a little like Azathoth. ^_^;