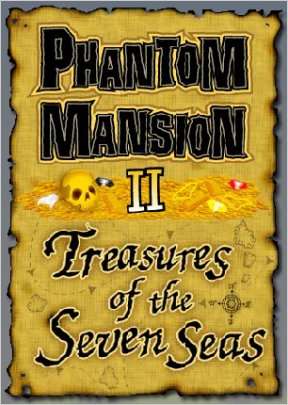 Phantom Mansion 2: The Arabian Sea is the third game in the second batch of tile puzzles from the Phantom Mansion series starring spiky haired little Hector and his endless quest for treasure. Push crates, dodge the cutest little itsy-bitsy monsters, unlock doors, ride magic carpets over a spiraling vortex of horror. It's a pirate themed carnival of wonder, Sokoban style!

The Phantom Mansion games feature colorful kid-scary graphics and a decent number of variations on the simple gameplay. The puzzles are just about at the right difficulty for a casual game; tough enough to hook you, but rarely mean enough to hurt you. However, they also suffer from a relatively slow pace. Wherever you need to be, Hector's got to walk there, and he's in no hurry. Control him with the [arrow] keys and access the options screen with the [space] bar. 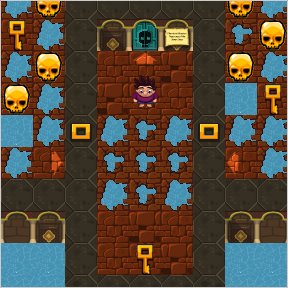 The latest episode is Phantom Mansion 2: The Arabian Sea. The previous episodes in order are:

And for Hector's previous adventures in the world of spooky block-shoving, read our review of the complete Phantom Mansion: Spectrum of Souls, which spans the rainbow (+1) with eight more collections of puzzles.

It's been months and months since the last installment! A fact which they acknowledge in the intro scroll when you start playing. I'm glad they didn't just drop it; I like this series.

Just wondering, is there a way to zoom out and see the whole level that I am missing?
Because, it is kind of annoying: You have to plan into the future like there is no tomorrow, but on the other hand, you just see such a tiny, tiny part of the level, which makes planning into the future kind of hard...

@Tetha
If there's no tomorrow, you probably don't need to plan for the future :p

To answer your question, there's no option to zoom out.

"Hide and Sink" I am also unable to decipher - too many possibilities.

Use the second one to get to the top of the map (you'll need to eat away one more cracked floor on the right), and push the box to the bottom, then left, two squares onto the stable ground. Open the door. Align the two rafts above the left switch. Push the box up into the room, then get around it and push it down onto the switch.

Align the two rafts above the right switch, and push the other box down onto it.

drakono, you have shown me the light, and I salute you. Finally I can progress, in hopes of seizing the precious turqoise and escaping this miserable dungeon. At least, when someone figures out Hide & Sink. I mean, just look at that thing. I'm not even going to try. I usually finish Phantom Mansions having needed spoilers for a couple.

Walk up far left of cracked floors, right to the top. Get above the crate. Push it down one and right two 'til it's got cracked floor above and below, then go down onto hard ground. Go to the top right of the cracked floor and push the crate down onto solid ground. Push it in zig-zags through the diagonal water squares. Push it right through the room with the Golden Skulls (ignore them). Push the crate on the switch. Go around the top edge of the Golden Skull room to collect all the skulls, then exit.

Question: Does Internet Explorer 8 have a problem with Jayisgames? I upgraded yesterday (upon MS's wicked auto-prompting), and it seemed to mess up a few minutes ago when I was trying to visit the site.

If I recall, Phantom Bridge was very misleading.

You have to rig it so a ghost walks around the room and presses the switch, I think.

I'm totally stuck on The Gauntlet.

I simply cannot get the +-shaped key in the top left area. The "hint" also doesn't make sense, which may or may not mean that I'm missing some obvious workaround.

Hi, I'm stuck at Phantom mansion-The Yellow Library, last episode (Bad Luck for everybody). I can't seem to make hector run fast enough to avoid the "red skull" square. I managed to fill up the holes under the stairs, and went to the subsequent rm, but is frustrated by the need to run. Is there abyway to introduce a cheat or tips on how to do it successfully? I hv already conquered Mansion 1 (Chapter 1-The Red Chamber), Mansion 1(Chapter 2-The Orange Library), Mansion 1 (Chapter 4-The Green Gallery)
I'm also very frustrated by hop frog. So any tips or cheats codes is much appreciated