In his last adventure, Eyesteam's humble hero Pajama Boy braved the depths of a dark, spooky, sawblade-ridden forest and overcame his fear of the dark. With his newfound courage, he decides to leave the forest and head on home to the city... only to find out that it's been destroyed and been conquered by mechanical monstrosities. Welp. At least he chose a good time for his little foray into personal growth! Now, in Pajama Boy 3, he must save the citizens of his city from their robotic imprisonment in yet another challenging platform game. Run, jump, slide, and even wall-kick with the [arrow] keys or [WASD], and collect the shiny gold keys that will free the humans from their cages. But the metallic invaders have worked themselves into the very fabric of the city itself... They even control the rebar! For Pajama Boy, that means ever-shifting levels that are constantly morphing and changing, pushing your reflexes to the very limit. Pajama Boy's third outing is perhaps his trickiest yet, and it brings with it a healthy helping of creative level design to delight you, even as you die repeatedly on that same patch of thorns, over and over again. 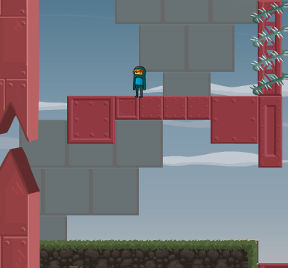 Pajama Boy 3 still follows in the footsteps of other brutal-tier platformers like the Meat Boy games, but as the series progresses, Pajama Boy is finding more of his own identity. In this third installment, Pajama Boy has developed a very strong sense of weight and inertia. He's slow to start and he can't always change direction on a dime, but once he gets moving, his motion feels quite fluid. It can take some getting used to, especially for those who expect more twitch-responsive controls in their platformers, but it's a rewarding control scheme to master. Not unlike in Eyesteam's other platforming series, The Sun for the Vampire! While familiar level gimmicks like sawblades and spiked balls are here, Pajama Boy 3 adds in a host of new obstacles, like metallic dog enemies and floating balloons, to change things up. The game's primary gimmick, though, is red blocks that appear or disappear as you play through the level, meaning it constantly changes on you. In some ways, this is really neat! Some levels change and remix themselves dramatically after you grab their key, and you'll have to play through an area you just went through with completely different obstacles. And some levels will change on you unexpectedly, completely wrecking your ideas of how you thought you were supposed to proceed and forcing you to adapt. However, it can unfortunately lead to blind leaps of faith when the path forward hasn't yet shown itself, and it's not always clear what form the way forward will take. Not to mention, it's rather cheap when the game suddenly drops spikes or a pit in your path, leading to the occasional reliance on trial-and-error and memorization. But Pajama Boy 3's level design is clever enough and fluid enough to make up for these quibbles, and it's still a great time for anyone who likes platformers with bite.

Is it just me or is there really considerable delay between pressing jump and Pajama Boy actually jumping?

There's a positive crapload of delay.

This isn't so much playable as it is annoying.
Those tiny platforms are bad, the roll function is awful and yeahy that delay gets you dead every time.

I contemplated ranting about the jump delay just yesterday! Ended up quitting at level 8 'cause I was so annoyed. I thought maybe it was just me though.

I have a Mac, so sometimes I just have to put up with stuff not working right. But like others in this thread, I felt the controls in Pajama Boy were laggy. Especially annoying in a game that requires so much precision and speed!

I didn't think the jump delay was that bad, although it could've been tightened up some. Wish platform games like this were released more frequently - nice level of difficulty.