It's happened to all of us at one point or another. You're at a sleepover, some kid starts telling a pants-wettingly scary ghost story, and all the other partygoers notice you quaking in your slippers. Suddenly, you've got to deflect questions regarding your bravery with all the might a terrified middle schooler can muster. Unless you're the eponymous hero of Eyesteam's platformer, Pajama Boy 2: The Dark Forest, in which case, you decide to prove your courage and boldly venture into the woods alone in a fit of preteen bravado. The woods which just so happen to be filled up with spikes, sawblades, and cannons spewing an endless stream of what appear to be silver gumballs. Maaaybe this decision wasn't entirely thought through. But certain death is nothing compared to the threat of sleeping in the dark, and plucky Pajama Boy is determined to escape the spooky forest... With a little help from a few fireflies, of course! Using [WASD] or the [arrow] keys, Pajama Boy can run, roll, and leap from wall to wall in a way that feels pleasingly acrobatic, though the wall jumping is a little bit touchy at times. You'll have to collect a patch of fireflies on each level to progress, but you'll rarely have to go out of your way for them; usually they're right in front of you on your way to the level's end. 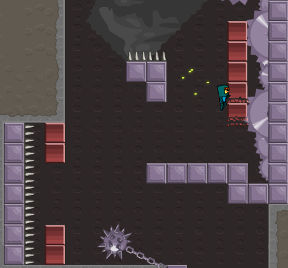 Speed and precision are the name of the game here, as Pajama Boy 2 is the kind of pull-no-punches platform game where needle-threading jumps and nail-biting dodges are the norm. But while it does ask for more platforming skill than your average hop-a-bout, it's still a far more laid-back experience than the likes of, say, Super Meat Boy. Swooshing along through the forest, deftly skirting around spikes and blades, has satisfying fluidity, and pulling it off (without dying) makes you feel like a champ. A few levels are based around going after fireflies first, and then working your way back to the exit, but it's a shame the concept wasn't utilized more. The devious traps and platforming gauntlets in the rest of the game more than make up for this, though. The only other real issue is the oddly-worded story screens, but those are skippable, and the tutorial text is still clear. It's clear that Pajama Boy has the skills to survive out in the dark, scary world, no matter what he faces! Now if only we could figure out who let a bunch of kids camp out next to these woods in the first place...

Well, the #2 has just been released so you will need to wait a bit, I'm afraid!

Does the world really need another meat boy clone?

That's no excuse - these games just write themselves. ;)

If you're going to have a game that needs twitch controls, your controls should be uber responsive. They've taken a leaf out of Meat Boy for the game style - but no the controls? Why? SMB had perfect controls.

@extraflux: If you're missing the spacebar-based jump, the game does allow for it, whether you prefer WASD with space or arrow keys with space. But if you're talking more about the general flow of things, well, then I'm afraid we'll just have to agree to disagree. I found myself liking the slightly floatier feel of things here, but it isn't how everyone likes their platforming.

Pet peeve: no separate music & FX. i like the music, but as is always the case I want to turn it off fairly quickly. but i love FX. so the game is significant and unnecessarily worsened. Give -- us -- separate -- controls!