Something has gone horribly wrong aboard the Nautilus. All the power on the submarine is out. The great Captain Nemo is deceased. And you've come to a dead stop on the sea floor. It seems like a nearly impossible situation to escape from. But where there's a will, and ingenuity, there's a way. In Nautilus Escape, from Just Pine Games, you will not go down with this ship, as you endeavor to get the sub back in working order and find your way back to dry land. You'll have to make use of both the items in your surroundings and unravel the puzzle-like mechanical workings of the ship to get back to the surface. Just click around your environment to investigate; the cursor changes to indicate clickable objects, and the game even helpfully explains what you're hovering your mouse cursor over before you even click on it. When you've built up an inventory, just click on the items you're carrying to use them; although you can't zoom in on them, you can still combine them by clicking in succession on the two items you want to put together. Stay strong, sailor... Even if there is something kind of creepily atmospheric and fun about being trapped 20,000 leagues under the sea! 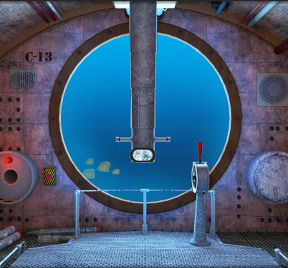 Nautilus Escape sets a great scene, with a well-rendered 3D environment and eerie, watery music. Although it lacks the directional arrows or navigation bars seen in other escape games, it still remains quite easy to navigate, thanks to its changing cursor and the obliging on-screen descriptions that always tell you exactly what you're about to click on or do. The item interface does feel a bit stripped down, however. The images used for the objects in your inventory are rather small and indistinct, making them difficult to tell apart at a glance. And items are rather important to this game, as many of its puzzles revolve around figuring out creative ways to use the objects that are lying around the submarine. For those who prefer the brainteaser-stuffed style of escape game, it probably won't feel as satisfying as cracking codes or putting together ornate patterns. But the item-based solutions are still clever and logical. For those looking first and foremost to escape the everyday, Nautilus Escape is a moody destination that's great for spending a quick break in. The mobile versions even mean it's a break that can be taken on the go!

Nice, short little escape. Only stumped for a little bit on one thing.

Nice and short escape and it's not even Wednesday. Only stumped, briefly, once.

Nice game, but there are some glitches:

I was able to take objects from the locker before I had managed to break the lock, and I could remove one of the fuses near the end without detrimental effect, which seems strange.

Can't get the radar to work.

I have the axe, loaded harpoon gun, and a fuse (already used and can't be put back). The periscope is clean, the valves turn, and the torpedo, speed handle, and oxygen tank are in place.

Can't get the radar to work.

I have the axe, loaded harpoon gun, and a fuse (already used and can't be put back). The periscope is clean, the valves turn, and the torpedo, speed handle, and oxygen tank are in place.

Perhaps a code is needed to activate the radar. Have you noticed that the buttons on the radar panel

contain letters as well as digits?
Can you find anything that could be a code?

Who would be the person with the authority to unlock the radar panel?

Wouldn't that be the captain? What's his name?

Have you entered the code into the radar?

Yes - you should see a change.

My radar says 240 degrees but I can no longer turn the periscope. It is stuck focused on an island in the distance at 120 degrees.

axe, loaded harpoon, oxygen bottle, and one fuse I removed from the fuse box.

Any tips? Thanks all!

The ship's heading is given by the radar panel. You can turn the ship using the two valves on the side of the room (one of which was jammed when you started).

looking forward to the walkthrough :)

Paul, the game comes with a walkthrough - click the the H icon in the top left corner.

Looks good, nice atmosphere, but it seemed really easy (I didn't need the walkthrough, and I _always_ need the walkthrough.) Fun if you want to fiddle around for a few minutes on a snack break, not so much if you're looking for a puzzle-heavy brain-twister escape.

I tried this last week & I keep forgetting to say: this game really reminds me of Morningstar. In particular,

the injured captain/dead man at the beginning. At least this MC tells Nemo to Rest in Peace, unlike the Morningstar MC to his crewmate.

Too bad there isn't as much of a story with this one, but I liked it all the same.

How do I connect the gears? I have the axe, harpoon gun and oxugen tank, none of which work

You'll need a belt. Where could you find one?

The dead captain wears a belt.