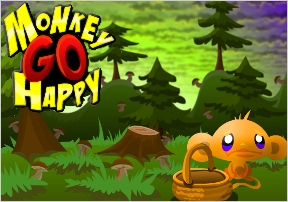 Monkey sad. Make monkey happy! That's your simple goal in Monkey GO Happy, a puzzle/arcade-style hybrid from Robin Vencel at Pencil Kids, creator of the Bowja the Ninja series along with Retardo and the Iron Golem. Pick mushrooms, find treasure, shoot toy ducks, set off fireworks, fire cannons and loads more, all in the name of big monkey smiles. It's a bit like the Four Second series of games, only without the intense speed and with more mammals.

With each level you are presented with a sad, sad monkey. Nobody likes to see a simian cry, right?! Using the environment and objects laying around, solve a series of simple (and rather obvious) puzzles to bring a grin to the ape's face. Many of the levels aren't puzzles at all, just simple toys or easy reflex games you can conquer without any effort.

The scenes in Monkey GO Happy are quite basic and present little to no challenge for most players. But the fun isn't in solving puzzles, it's making a monkey smile by pulling off wacky stunts. Mindless fun, pure and simple, but it's a fifteen minute coffee break well spent!

I wrote a walkthrough for this game before I ever saw it on the PencilKids website (they posted it on Newgrounds first). For this game I found it appropriate to adopt a Dr. Seussish style.

If you adopt a monkey, you must keep its spirits high,
And there are lots of ways to do this task (I do not lie).
It all depends on where you are and what you have at hand,
And once I've told you what to do, I'm sure you'll understand.

Your monkey's on an island and he's crying like a baby?
The milk inside a coconut might perk him up (just maybe).
So grab a juicy coconut and cut it with a knife,
And I'm sure he'll be grateful all his little monkey life!

You've got your monkey weeping in the middle of the night?
Some bright explodey fireworks should make it feel alright.
So take your trusty friction match and strike it on the box,
Then light the fuse- but stand too close and you might burn your socks!

He's crying while you're visiting the carnival? Aw, shucks!
Just head down to the Duck Shoot and he'll watch you shoot some ducks.
The gun's right there, so take it, aim with care, and let it go;
Four ducks go down! You win! And monkeys love balloons, y'know.

It's fun to take your monkey to the alley while you bowl,
But if it gets unhappy, you might need to change your goal.
So take your ball and place it in the center of the lane,
But time it so it reaches "STRIKE" or you'll have naught to gain.

You say you're stuck at home and you can't give your monkey glee?
Just pick up the remote and let it watch your grand TV.
Change channels up and look for Number Three, the Monkey Hour,
And lest your screen show nothing, do remember to hit Power.

Your monkey saw that crane machine? The dolls inside look cute?
Well, take some money from your bag and drop it down the chute.
Just move the crane; when it's above a toy you like, press down,
But only that stuffed monkey doll will wipe your monkey's frown.

A target hit with cannon fire is always monkey-nice,
So if you want a bullseye, tilt your cannon upwards twice.
Then drop a cannonball on in (they're heavy as a sow),
And after that, just take that fire and light the fuse... KAPOW!

No monkey's smart enough to gather mushrooms, though he'll try;
So if you see him crying with his basket, you'll know why.
It wouldn't hurt to help him out; pick every 'shroom you find,
Then dump them in his basket and he'll leave his woes behind.

The Angry Ape's an idol for the whole of monkey-kind,
So if his poster's messed up, there's no doubt that they will mind.
Just click the tiles to rotate them until they're back in place,
And when they're back together, see your monkey's smiling face!

You've got inventive urges? Here's a plan that's sure to win:
Just build a wild contraption to provoke your monkey's grin!
Make sure that every piece is placed upon its silhouette,
Then pull the plunger and you'll have your gladdest monkey yet!

I've never seen a monkey that has liked to sail the seas,
But promises of treasure will be certain to appease!
Just trace each path from start to end; begin with A and B.
And if that doesn't help, then you can always try path C.

The duck shoot didn't do it? He's been crying all the while?
The sight of nine unconscious moles makes any monkey smile!
So pick that hammer up and try your hand at Whack-a-Mole,
And don't forget to aim your impact just above that hole.

(The advertisements will not help to boost your monkey's mood,
So simply let them pass you, even though they're very rude.)

Your monkey's favorite ball is trapped inside a big balloon?
Well you had better take a pin and pop it sometime soon!
Just guide your cursor through the yellow maze from START to end,
But never touch a wall, or you will have to start again!

Enclosure in a metal cell will make a monkey sad,
But let it look inside a safe and it will feel so glad!
What's that? You cannot help because you know no combination?
You might pray to the Roman gods about your situation.

If Christmas-time approaches and a monkey loses glee,
The surest way to cheer it up's to decorate a tree.
Just put the tree inside its pot and decorate it well,
And when you're done, just plug it in to break the sadness spell!

If you adopt a monkey, you must keep its spirits high,
And there are lots of ways to do this task (I do not lie).
It all depends on where you are and what you have at hand,
And now that you know what to do, I'm sure you understand.

This game is relatively easy. The maze was really irking but the trick is to take your time. Overall, cute game and a good time waster (but it's not that great when you're supposed to be studying) but I can't rate it that highly since it didn't pose much of a challenge.

This monkey likes the most varied things....

I can't get past the duck shoot. Why? 'Cause I can't see the dang mouse!

It took me forever to do the maze, but I just HAD to make that cute monkey dance and smile. Adorable! Love the happy music! :-)

That monkey scares me when it's happy... o_o

I can't pass through the breaking code stage . Where you have to guess the numbers to open the safe .

Umm, guys? In the maze just right-click then click the end of the maze.

code is written in roman numerals in background

Woah, hold on there! a Monkey is NOT an ape. Not an ape. If you don't believe me, next time you go to the zoo, you should climb in the gorilla cage and call the biggest silverback a monkey and see what happens...

the maze really really irked me. but otherwise it's a good game

You can use a classic flash cheat on the maze if you:

Can someone please help me with the code??? I`m losing my mind here. hehe.. please help me, can`t find any hint about it. thnx:) I love the game.

the combination to the safe is on the wall in roman numbers!!

I don't know how games get the Kid Safe label here but I don't think a game where the first three levels are
"Play with a big sharp knife!" then
"Play with matches and fire works and definately don't close cover before striking!" then
"Play with a gun and nothing bad happens if you shoot your friend!"

Is one I want my grand children playing.

I find some great games here for them, they don't read much yet but they like games and I think it's better then just putting the TV on. My grand daughter likes Anakas Journey Best and plays it over and over, My grand-son likes that Dolphin game, they both like that one but it's his favorite and he will just watch her play some times.

Please make it easier, to find games like those. Maybe this game is OK for older like teens but by then they don't need "Kid Safe" any way!

[Edit: Thanks for your feedback! I've updated the tags for this game. We try our best to get the tags right the first time, but evidently we're not perfect. We appreciate all feedback! :) -Jay]

Ooh, and Monkey is naked, too! Sheesh! Lighten up, Granny!

fattywads: orangutan.
Anybody reading Pratchett _knows_ that although gorillas and chimpanzees too are apes, the Librarian is an orangutan and understands human speech and is picky about words.