HD this and updated that! Back in my day, we had to play the game as it was released and like it. Game-crashing bug? Deal with it. And we did. Why, sometimes we had to reprogram our own games while we were playing them. And did I mention we didn't have hands then, either? It's true...

Tiny Bang Story on Android - The Tiny Bang Story is back! After securing a place in our hearts with an award in our Best of 2011 feature (Best Puzzle or Simulation, in case you were wondering), the PC/Mac download made its way to an iPad version and an iPhone version. Now, Android owners who happen to be fans of smart point-and-click puzzle games are in luck, as the game is finally available for Google's happy little OS. Resembling Samorost, Hapland, or Machinarium in basic design, The Tiny Bang Story challenges you to re-assemble a broken world piece by piece. The artwork is hand drawn and the puzzles involve a little thinking and a lot of hidden object finding.

DOOORS gets more doors - If you're one of the many humans who has a healthy addiction to point-and-click-style puzzle games, you've probably already thrown yourself at the mobile game DOOORS. The simple one room at a time formula is extra inviting on mobile devices, allowing you to focus on a few puzzles at a time as you climb your way through room after room. The original release a few months ago featured 50 levels to play, but since then, 25 new levels have been added, all for free! Go check out our DOOORS review and walkthrough for the full scoop, then get to downloading the game, 'cause you know you want to. 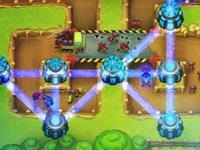 Fieldrunners 2 goes HD - A few short months ago, Subatomic Studios released the highly anticipated sequel to an early iOS tower defense hit, Fieldrunners 2. Naturally, the game blew everybody away with its... well, its wealth of towers, its great gameplay, and its utter perfection. The only drawback was a lack of an iPad version, which has now been rectified! The separate version of the game features five new towers as well as iCloud support, developer commentary, and a higher resolution for newer iPad owners to enjoy. It's impressively polished and impossibly addictive, and even though it's a bit on the pricey side, Fieldrunners 2 HD on a tablet is a smart buy.