Things can get messy when you're a ball of ink. Or when you're a bug that can only live while riding on a turning gear! Those guys should switch places. An insect could do great things flying through a world of pencils, and why would ink care if it fell from a piece of machinery?

Blot (universal) - The artsy star of the show, Blot is a stylish "cave flyer" game of avoidance that borrows liberally from games like Jetpack Joyride and Tiny Wings. It's the visual style that sets it apart from the rest, though, and those sketchy backgrounds and inky menu items will quickly earn a place in your heart. Tap the screen to encourage our little Blot friend to float higher on the screen. Avoid all the floating pencils, as they spell doom for your little adventure, and collect coins as you play. Gather little boost power-ups to grow larger in size, making it easier for you to nab items but more difficult to avoid pointy pencils. Exchange your coins for upgrades in the "Art Supplies" store (cute), where you can grab some seriously cool items that will help you stay alive longer. 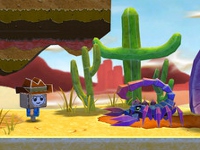 Paper Monsters (universal) - Platform games on the all-touch iOS devices don't exactly have the best reputation. After all, how do you accurately control a character when it's just fingers on glass? Paper Monsters isn't about speed or accuracy, though, and it encourages slow and careful exploration, two things that go over well when you lack physical buttons. Adventure your little cardboard self through each level, collecting buttons and golden paperclips (woo hoo!) while bopping monsters on the head to defeat them. It doesn't re-invent the platform genre by any means, but the visual design is gorgeous and the pseudo-3D brand of exploration is quite an interesting feature.

The Tiny Bang Story (iPad) - We loved the game when it was released for Mac/PC in the middle of 2011, and during our Best of 2011 feature, The Tiny Bang Story walked away with Best Puzzle or Simulation game! Now, all the lovely splendor that is the downloadable game has been stuffed into your iOS device, and it's as glorious as you would have hoped. Resembling Samorost, Hapland, or Machinarium in basic design, The Tiny Bang Story is a smart point-and-click puzzle game that challenges you to re-assemble a broken world piece by piece. The artwork is hand drawn and the puzzles involve a little thinking and a lot of hidden object finding. 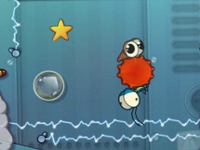 Jump Out! (iPhone/iPod Touch) - Who can resist a cute, big-eyed insect? No iOS device owner, that's for sure! This gravity- and physics-based game features several dozen themed-levels, each packed with stars to collect, objects to work your way around, and spinning gears to ride on. Each insect you control needs to stay on one of these gears in order to keep the level active. Tap and drag on our bug friend to fling him to another gear, bouncing off of walls and grabbing stars along the way. You've got to get all the insects to the exit, and when things like air-blasting fans get in the way, it's just as much skill as it is luck to make it out successfully!

"how do you accurately control a character when it's just fingers on glass?"