Mission US: City of Immigrants

Mission US: City of Immigrants (Note: Site registration is required to play.) is the fourth in the series of educational point-and-click adventure titles focusing on American History created by Electric Funstuff under the auspices of New York PBS Station Channel 13. It is 1907. You are Lena Brodsky, a 14-year-old Jewish Immigrant from Russia. In your hometown of Minsk, the forces of the Tsar have pushed your family off their lands, and the violence of the pogroms looms large. Your brother Issac was the first to cross the Atlantic to seek a new life in the land of America, and you have followed in turn: a fourteen day trip across the entire world. You hope that you will prove yourself worthy of entering America. You hope that you can earn enough to send for your mother and father. You hope for a better future. There will be many obstacles in America, and many choices to be made. But it is, they say, the land of opportunity... 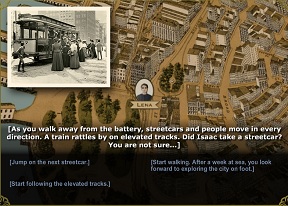 Controlled with the mouse, like the other installments of the series, City of Immigrants is less puzzle-solving than exploration, discovery, and conversation. The game's five chapters span from Lena's arrival in 1907 (emphasizing the processing of Ellis Island and initial exploration of a strange land), through daily life in turn-of-the-century New York, leading up to the turmoil during the New York shirtwaist strike of 1909. The game is fairly linear in the events that occur, as befitting the march of history, but the choices you make will affect your values and skill statistics, opening up new opportunities depending on what you choose to develop.

At the risk of sounding callous, one must admit that Lena's immigration is an natural fit into the framework of a computer game: the exploration of unfamiliar territory, interactions with newly met characters both friendly and unfriendly, and, overall, the general drive to build a new life almost from scratch. However, the game never shies from the difficulties of her journey, not just as an immigrant, but as a woman and a Jewish woman at that. I've been lucky enough to cover the Mission US series ever since its first installment, and the topics they've chosen to cover have never been more relevant (though one sometimes wishes they weren't...). The team has never faltered in providing deeply researched personal tales (with, admittedly, somewhat uncanny valley character art when in conversation mode). We all have much to learn from the past, and that learning never comes easier when it can come in the form of games like City of Immigrants.

Mission US: Mission 4: City of Immigrants