Mission US: For Crown or Colony 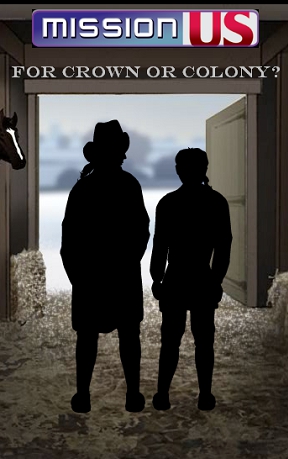 Edutainment!... Commence eye-rolling. Many are skeptical of any game that claims to "make learning fun", with the obvious exception of games involving the combination of buffalo hunting and dysentery and/or trench-coated Hispanic women stealing national monuments. Perhaps it is the assumption that, since most believe learning (if not necessarily schooling) to be naturally fun, any subject that has to be made fun must be really dry. Certainly people learn from games: resource management, strategy, physics, lateral thinking... they're just not thrilled about setting out to do so. That said, while Mission US: For Crown or Colony is unlikely to redeem the genre for everyone, the tale of a teenager coming of age in Colonial America makes for a solid adventure, whose gentle challenge is balanced by excellent production values and historical detail. Note: Site registration is required to play.

Created by Electric Funstuff under the auspices of New York PBS Station Channel 13, For Crown or Colony is a mouse driven point-and-click game. Playing as 14 year-old Nat Wheeler, a lad who has just been accepted as a printer's apprentice, the goal of the game is nothing so much as to enter the world of 18th century Boston and navigate the revolutionary events that are about to occur. There are few out-and-out puzzles in the game: the emphasis is on exploration, discovery, and especially conversation. Most of the five chapters start with Nat receiving a task to complete, then moving from location to location hoping to accomplish it. Though the game is quite linear overall (keeping as it does to historical record e.g. There's no chance of preventing the Boston Massacre), and each of the chapters are self-contained, certain actions will open up optional events and there are three obviously-branching endings. Throw in a Pennywhistle Hero music rhythm minigame, a history review quiz, and a handful of primary documents, and you've got an adventure that Patriots and Loyalists of all ages will enjoy.

Analysis: There is no doubt that For Crown or Colony was made for a relatively young audience, and for the classroom at that. However, this impacts the game quite little: certainly there is a focus on vocabulary which may annoy older players, but there's nothing wrong with historical accuracy. The developers have clearly taken the time to create a nuanced recreation of revolutionary times. No doubt it is a simplified one, as per the target audience, but also a balanced one. Both the Sons of Liberty and Tories are given their say, (not to mention the subsection of the population that just wished there wasn't so much violence or thought it a good opportunity to make a buck). You will meet Constance, the comely daughter of a loyalist merchant, genuinely confused as to why people are hating her father for selling the same British goods he always has. You will meet Royce, a firebrand revolutionary who proves that just because one is patriotic doesn't mean they can't be kind of a jerk. And yes, you'll meet important figures of the time "Before They Were Stars", as it were. 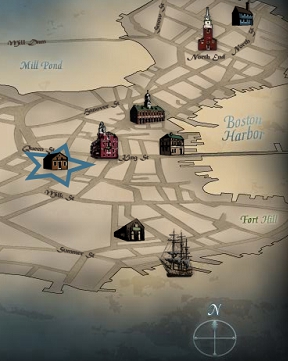 Particularly, I liked how For Crown or Colony seemed unafraid to confront the complex issues of the revolution. Were the Sons of Liberty hypocrites for being unlikely to extend their ideals to the emancipation of slaves? When does the attempts of British soldiers to protect the peace cross the line into murder? Are those dedicated to an ideology inherently biased? It's pretty heady stuff for a Junior High audience, and I can see it being of great use in the classroom. The copious background materials on the site should be of interest both to educators and to those just interested in further research of the period.

But, for those who aren't teachers, middle-schoolers or history geeks, how does For Crown Or Colony play? Quite well actually. It reminds me of the chapter games the BBC releases every so often, in terms of both structure and polish. The game is quite easy to make your way through, which is both an advantage and disadvantage. The mere fact that the game hopes to teach history, not adventure-game-logic, means no pixel-hunting or throwing pies to defeat yetis. On the other hand, it might be said that there are no puzzles to solve at all. This can make you feel like you are interacting with the game, rather than play, if that makes any sense. That said, the characters and situations are intriguing, the game-world is incredibly detailed, and if most of the critical thinking ends up going on inside your head after the game, rather than on the screen, there's nothing wrong with that.

For Crown or Colony falters a bit near the end with a blatant "pick your ending" moment, and a pretty dire epilogue movie that feels like a bad lecture. Still, the game's flaws are more than made up for by its advantages. For Crown or Colony is only the first in a series of four historical games, and while its promised sequel Fight For Freedom has missed its promised March release date, the developers assure that it is still on the way. Frankly, I think it'll be worth the wait. You say you want a revolution? Well, you know, it's gonna be all right to play Mission US: For Crown Or Colony.

Play Mission US: For Crown Or Colony

Pretty fun way of whiling away twenty minutes or so, and as a non-USian a good little refresher course in history. I think I chose the best ending, all in all:

spending my days on a tropical island? Yeah, I could go for that!

Sadly, it wouldn't let me play part 1. Every time I clicked on it (streaming and downloaded versions) it just plopped me into the prologue again. I tried saving and loading, and I tried restarting, to no avail. Any tips?

Has anyone managed to defeat the yeti? I've tried throwing the pie, but he just eats it! Arrgh!

I've handed out all 3 packets and I've got a crowd of 46/50 people, but the scene won't end. I tried clicking on each character, but that didn't fix it. Does anyone know how to get the game to recognize I've handed out everything?

Hm, not bad.
Earns an extra star for allowing the player to choose the "bad" side and not immediately and relentlessly herding one into stereotypical good.

On replaying, an ability to skip cut-scenes would've been nice...

In the epilogue, why was Philadelphia marked on the map in the location where Pittsburgh actually is? For an educational game on colonial history, that's pretty disturbing. I mean, it's not like Pennsylvania's a small state...

@sissyphus - This is just a suggestion since I'm not entirely sure how progress is saved for this game, but have you checked how much data you allow Flash to store? While I do realize the game does incorporate save points, I've noticed that not all progression seems to be incorporated into a save.

Good suggestion, stella! Sadly, even with unlimited storage I have the same problem

I really enjoyed this one. As a non-US player, I suppose I don't get all the references to famous historical persons but the game does a good job.

It looks like I have to replay from the beginning now

because the game won't let me choose the endings that I've rejected... but that's okay.

I was impressed that

You see different scenes of the Boston Massacre each time you play that part in the game, I'm sure there's a lesson in there about the nature of history. :)

Skippable cutscenes would be nice, but would break the immersion. Although, there were a couple of times where the writing and/or presentation made me laugh out loud.

The only thing I dislike is the way you get railroaded through the progression of the (hi)story without being allowed to go back and replay scenes.

does anyone know how to sneak out with the black sailor at midnight?

get it from mr cummings mrs. eades says that its to expensive

so where do i get it from?

In part 1, how do I find the pencil so that Candlemaker guy can write an advertisement?

For the pencil in part 1:

speak to Mr. Lillie next door and ask if he sells pencils, then he'll give you one. I did this after speaking to his niece (which happens the first time you leave the North End) in case that matters.