Tomorrow Corporation, the quirky parties responsible for World of Goo and Little Inferno, are back like the return of the prodigal son with their eagerly-awaited Human Resource Machine. What have they got for us this time? It's an indie programming puzzle game (coming soon to Wii U and tablets) about coding in assembly language. Other titles like Spacechem and Infinifactory have done this before to great effect, but Human Resources Machine puts Tomorrow Corporation's signature on the concept. Rather than try to obscure the programming aspect completely in favor of presenting it as a game, Tomorrow Corporation instead opted to use the stark world of coding as a metaphor for the drabness of the standard corporate office environment, or perhaps the other way around. Cheery sort of folk! There's plenty of storyline and the whimsical characterization you'd expect as you advance through levels building up a list of procedural instructions to process a series of boxes according to specifications assigned by your supervisor and ship them out — if your procedures were correct, of course! Each level presents you with an assembly line of numbered or lettered boxes, a programming task, and an outgoing assembly line. You'll need to pick up each box, process according to spec, and then ship. But you won't be doing it manually; even grabbing things from the incoming line is done through code you'll write. 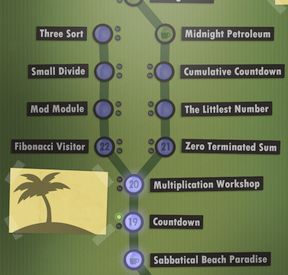 You'll drag various code snippets to the list of instructions on the right of your screen. There are instructions to snag from the incoming line, place on the outgoing, compare the values of two boxes, loop instructions, conditionally loop, add, subtract and so on. Dragging an instruction onto the question marked box will explain to you just how it works. You'll occasionally need to do more processing than you can hold boxes, and so areas have been demarcated on the floor as 'memory areas'. You can set a box down, snag another, come back and compare the two. Memory areas and even parts of your code can be conveniently labeled using an advanced tape-and-felt pen simulator which lets you draw or write with your mouse. Each level has certain optional performance requirements, as World of Goo did; complete the whole set of tasks within a maximum number of moves, and throw together the code to do it using only so many lines of code. Some levels have requirements that can't be satisfied with the same code; it's efficiency of work or code, but not both simultaneously.

When you hit Play, your character will proceed according to your code and, refreshingly, do exactly what you've specified. The downside is that he'll do exactly what you've specified, whether that's blithely chucking boxes casually on the floor that belonged on the outgoing line, cramming boxes together to add values when that isn't quite what you'd wanted, or replacing boxes on the floor with others. Fortunately you can witness him proceeding through the code, and the pointer on your code will match his actions so if something's off, you can spot where the error is. Any erroneous output is immediately called to a halt by the supervisor, who won't just bark at you, he'll also show you what the expected output was, and what you'd placed instead. With the code halted, you can 'step backward' through the code to assess just where the problem was and correct it. You can then restart, with a new set of boxes - and different values! - on the inbound line. If everything's dandy you can increase the rate at which he works, going through the code action by action at a frenzied pace. 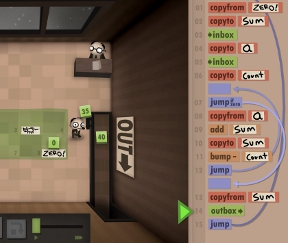 Between levels an elevator presents you with 31 sequential floors of main levels, 11 optional bonus levels as well as a few cutscenes and a storyline that progresses as you do, all done in Tommorow Corporation's unique look-and-feel. You wouldn't expect a game from Tomorrow Corporation about programming in assembly language to just be dry and bland, would you? But World of Goo and Little Inferno this isn't. Tomorrow Corporation delivers all the dark charm we'd expect, but the core concept seems to be a bit too hard-and-fast to provide them with as much creative wiggle room as their other titles have. They seem at their best when there's plenty of latitude for imagination, and assembly language programming isn't exactly fertile ground for that. What they do manage to do however is take an otherwise depressingly rational concept and apply their creative talents to successfully provide an enjoyably gamified learning environment. It's simple and enjoyable enough that kids can learn and master it, getting an early start on a promising coding career, and it has the right proportion of fun-to-reasoning skills that adults can stump themselves with it too. The advancing storyline provides incentive enough to keep passing levels, and though an in-game manual describing the coding commands would've been nice it's nothing that can't be readily looked up online.