If you don't know Zachtronics, my friend, you have a wonderful journey ahead of you. Known for developing some of the smartest and most satisfying logic-based programming puzzles around, like The Codex of Alchemical Engineering and SpaceChem, they're creators of games that challenge you in the best possible ways. Currently available in Steam's Early Access is their latest title Infinifactory, which takes all those clever, cerebral puzzle concepts somewhere out of this world. No, I mean... literally. While driving home one night from work, after spotting a bright light in the sky you find yourself aboard a spaceship, outfitted with a suit and a nifty jetpack, the apparent prisoner of a bunch of aliens who want you to... do... something... for... reasons? Surprisingly, being burbled at in alien lingo isn't particularly enlightening, though the fate that could await you if you fail should provide sufficient motivation to learn. So, hey. You're stuck in a tiny room with nothing to eat but food pellets, and nothing to do but solve the various puzzles and problems you're presented with from your monitor, which in turn zaps you to various alien locations to do so. It might sound like a bad situation, but look on the bright side. Infinifactory is fun, morbidly funny, and mentally engaging in the way few games ever manage, making it a fantastic puzzle experience for new fans and old. 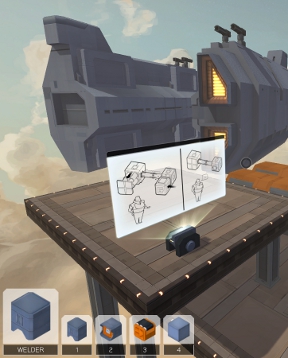 Infinifactory is actually played from a first-person perspective, with you exploring with [WASD] or the [arrow] keys, and using the mouse to look around and interact. Tapping the [spacebar] once lets you jump, while holding it activates your jetpack... hold the key down to fly higher, or hold left [CTRL] to fly down. After the tutorial, the game is broken up into a series of levels where your goal is to meet the conditions by crafting a machine that delivers things where you want them to go. You'll do this by placing different types of blocks, such as the conveyor blocks you can link up in tracks to move things around. Holding left [shift] will display all available blocks, and allow you to equip different ones by clicking their icon, or assign them to numbered hotkeys. Left-clicking places your current equipped block on the highlighted area your cursor is pointing at, while right-clicking destroys blocks, and tapping [Q] and [E] will rotate the block you have highlighted. Note, however, that blocks are still beholden to the laws of gravity... they need to be attached to something to stay up in the air, for example. This ain't Minecraft.

Most levels revolve around setting up ways to get crates to the appropriate teleporters in the required numbers. Make sure you're paying attention to the symbols on the teleporters so that you're only sending each one the type of crate that matches it. When you hit [R], the factory turns on, and so does all the machinery you've placed. Hit [R] again to turn things off, and hold [F] to fast forward. Other puzzles will add wrinkles to the formula by requiring you to, say, set up a point that welds two types of crates together. While chances are you can puzzle out a solution, Infinifactory, like all Zachtronics games, is about doing so as smartly and elegantly as you can, with as few blocks as possible to maximize efficiency. You're encouraged to optimize the solutions you come up with for each level, and if you have friends who are playing the game, you can see how they did, and presumably track them down and accuse them of being hackers when they beat your score. 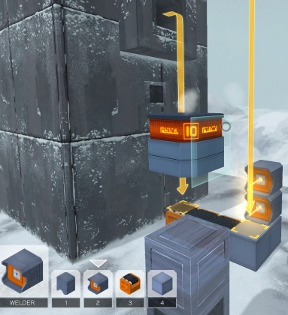 A lot of Zachtronics' games can make you feel clueless, out of your depth, and more than a little dumb, but Infinifactory capitalizes on this fish-out-of-water feeling by making it part of the story and gameplay. You stagger through cold, silent halls, surprised and alarmed at every turn. You stumble across a disconcerting audio log. You get shouted at by an alien after a bunch of fanfare. And then you get dropped down a chute into a tiny cell with a bed, a toilet, and food pellets that rain from the ceiling. It's a fantastic, understated opening sequence and tutorial that manages makes for an immediately compelling and engrossing game. While you'll encounter some diagrams and information as you play, Infinifactory is largely all about learning as you go through experimentation, and then adapting what you've learned to account for new information and solutions. It's a remarkably rewarding experience that pushes you to challenge yourself, and your performance reviews are, um... also rewarding. And surreal. And even more confusing.

The 3D first-person perspective takes a little getting used to... the controls are simple, but having to fly around and under things to build and tweak with larger designs can be a little awkward at first, though you'll get your, um, space legs? in no time. In its present state in Early Access, Infinifactory comprises a large chunk of over thirty increasingly complex levels that wrap up the main campaign, as well as some morbid storytelling that gradually begins to paint the bigger picture. New blocks are added to your inventory as you progress, making finding the most efficient solution even harder when there are multiple ways to achieve your goal. Zachtronics plans to expand the game even more, with different block types in addition to mini-campaigns, sandbox mode, and more, while the Steam Workshop allows you to create and share your own puzzles. If you already know Zachtronics, Infinifactory is a no-brainer recommendation, but even if you're not a fan yet, anyone who wants a game that takes them seriously and engages your brain in a big way should do themselves a favour and pick this one up. It's smart, funny, inventive, and challenging in all the right ways. Bottom line? Infinifactory is already great and it's only going to get better. Highly recommended.