Gelato Games' sword-swinging platformer Goblin Sword is one of those iOS titles that earns the term "retro" both in look and gameplay. If you had shown it to my ten year old self back in the nineties I would have believed it right at home on the SNES, and then I would have told you to leave me alone and let me get back to Chrono Trigger because ten year old me was a brat who was an insufferable RPG snob. The premise with Goblin Sword is pretty basic, in that you play a hero out to stop ye olde ancient evil-e, which requires leaping and slashing your way through levels filled with minions, traps, angry wild life, and pots to smash. There are only four buttons... the left and right arrow keys, and one to slash, and one to jump and double-jump. Stab enemies and collect gems and coins to buy better equipment, and don't let your hearts run out or you'll need to start the entire level over. Don't worry, most stages are short... unless you want to find all the chests, coins, and crystals. Pile on a bunch of bosses, power-ups, and secret areas, and Goblin Sword is a vibrant love poem to days gone by with bite-sized levels that are perfect for on the go. 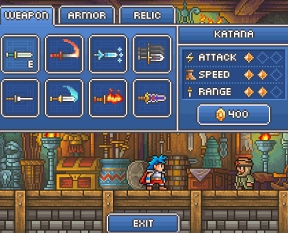 If you're playing Goblin Sword, you're playing it because you enjoy that very classic, early console sort of platforming action, so you're probably not going to view its relative simplicity as a negative. Goblin Sword is very slow to ramp up, with the entire first area feeling like training wheels, so the impression it gives initially is of almost egregious simplicity and ease. You don't necessarily want a game to stuff you in a locker and steal your homework at first blush, but Goblin Sword doesn't really develop any sort of challenge until the second area, when the enemies and your environments become deadlier and more complex. The default controller configuration is also sort of clunky, with the attack and jump buttons so close together that unless you have the fingers of an emaciated pixie you're going to wind up jumping when you want to stab, and vice-versa. You can change this under the options, but strangely, while you can pull the attack and jump buttons farther apart, you can't do the same with the directional buttons, which wind up feeling similarly kludgy in places. It's not really a game that demands split-second timing given that most of the enemies and traps move in clear patterns like classic platformers, but it's still something you'll need to adjust to.

What Goblin Sword does get right, however, is pitch-perfect authenticity when it comes to its gameplay once it really gets going. Enemies become more elaborate at the same time the levels themselves do, packing in spells, explosives, crushing blocks, and exploring each stage becomes a lot more fun and engaging. The colourful style looks great on the iPad, and the simple controls makes this something that's perfect for just about any age or skill level. Players who actually grew up with this sort of thing as opposed to only being exposed to "retro-styled" games will likely take to it best, but Goblin Sword's ease of play and eye-catching old-school style makes it a solid casual action platformer no matter who you are. With different equipment to buy and relics to find and unlock, Goblin Sword offers a lot of bang for very few bucks (and no microtransactions either!), making it just the ticket to get in touch with your inner retro child. Inside all of us, after all, there lurks a hyperactive kid who just wants to smash and stab things... who says video games aren't healthy?

I agree with the review - especially about the difficulty picking up a bit late. But once it does, the levels provide quite a challenge - and especially the construction of the hidden areas have a nice intelligent design behind it.
I also like how the next set of levels opens up before you completed one - giving you more freedom and less linearity in your gameplay.
The different swordtypes gives a good variety as well.
I don't quite understand the point of the armors though. I seem to take equal amount of damage no matter the armor.
In general I give 2 thumbs up for this game.

I love both pixel art and chip tunes. I'm "old," but even many young folks like the style. I checked all the info in http://goblinsword.com I was gibing a look and it looks this game is in the top of itunes during the last weeks!

> JohnB— Wayward Souls is an action RPG by Rocketcat Games that shows the world what a portable roguelike should be. The game takes full advantage of quick-burst mobile gaming habits and allows you to jump in, slash some baddies and collect your reward, all without having to tap through pages of story text or tutorial tips. It's a direct descendant of the studio's previous mobile RPG Mage Gauntlet, only more refined and better suited for satisfying rounds of hack 'n' slash.  ...

> JohnB— Mika Mobile's Battleheart Legacy is Torchlight II (or Diablo, if you like) for mobile devices. Those are some big words to throw around, but the studio has managed to capture the feeling of epic adventure, combat, upgrades and quests from those massive RPGs and condense them into something that's accessible without sacrificing complexity.  ...

> Dora— Hexage delivers that rarest of beasts, the mobile action RPG that's as easy to pick up as it is hard to put down. With controls that are simple to learn and a myriad of attacks at your disposal, Reaper is a stunning game with addictive battling and a lot of gameplay to slash your way through.  ...

> elle— Explore deeply layered fantasy landscapes, encounter boss battles and intriguing characters, discover treasure chests and secret coves, upgrade armor and weapons, level up and and everything else you'd want to find in an epic RPG platforming adventure. The on screen controls make your journey all the more enjoyable for a classic gaming feel. Any nostalgic cravings you had for your favorite games of old will be satisfied as you are the hero and your quest is great. Keep that sword handy and your magic prepped; who knows what danger lurks beyond those gates? You'll soon find out!  ...