Wayward Souls is an action RPG by Rocketcat Games that shows the world what a portable roguelike should be. The game takes full advantage of quick-burst mobile gaming habits and allows you to jump in, slash some baddies and collect your reward, all without having to tap through pages of story text or tutorial tips. It's a direct descendant of the studio's previous mobile RPG Mage Gauntlet, only more refined and better suited for satisfying rounds of hack 'n' slash. 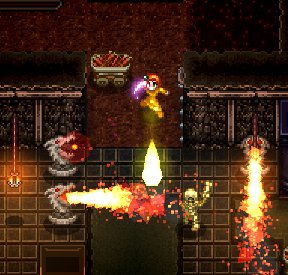 Wayward Souls drops you right into a randomly generated dungeon, introducing you to the controls when necessary but otherwise leaving you to cut your way through foes one group at a time. You have some simple spells you can collect and cast along with weapons to serve as your main form of attack, just enough to help you through the rooms of quickly spawning bad guys and treasure boxes. Really, it's all about staying safe while dealing as much damage as you can. Healing potions are rare, and death is permanent. Items and upgrades don't carry over when you kick the bucket, but coins do, which allows you to beef up your chosen hero before heading into danger.

There's plenty to like in Wayward Souls, especially if you're a fan of Spelunky-style challenges. Three dungeons, six characters to unlock, randomized level layouts and more enemies than you can shake your little swipey sword at. Wayward Souls looks and plays great, and Rocketcat has promised there's a lot more to come in the future!