Mika Mobile's Battleheart Legacy is Torchlight II (or Diablo, if you like) for mobile devices. Those are some big words to throw around, but the studio has managed to capture the feeling of epic adventure, combat, upgrades and quests from those massive RPGs and condense them into something that's accessible without sacrificing complexity. 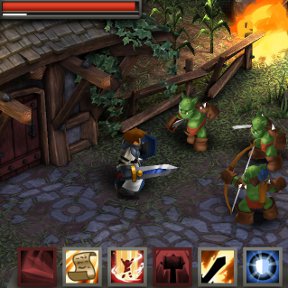 You have a surprising amount of freedom in Battleheart Legacy. The overworld map lets you move wherever you please, uncovering the occasional enclave of bandits and the like that you can choose to jump in and investigate. You'll also obtain quests from NPCs in towns, which give you a little more direction if you like. All of this puts you in the perfect position to gather gold and items as well as earn experience points from defeating enemies. And what would an adventurer do with those things? Why, level everything up, of course!

Combat has this wonderful cadence to it that's brilliant to watch. Target a foe and move into position to begin the battle. Your character attacks on his or her own, all you need to do is put them in the right spot and let the sparks fly. Skills are the spice of life in Battleheart Legacy, each of them occupying a square on the bottom of the screen. Tap one to unleash it and deal some real damage to your enemies. Wait for the recharge, then do it again, why not?

Stats and skills are split into two separate areas. When you gain a level you can immediately bump up things like strength and endurance, giving you a little confidence boost while you're out and about. Take these increased stats back to town and you might be able to train a new ability. The trainers offer five different types of skills, each one roughly corresponding to a classic fantasy character class. Like pounding your foes into oblivion? Hammer skill sounds neat! Prefer magic or sneak attacks? Battleheart's got that, too. You can also mix and match abilities, but because of the stat requirements, it's best to focus on one or two areas and only dabble in the rest. 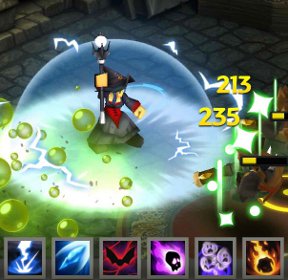 Analysis: Don't misread Battleheart Legacy as a simple casual game. It's easy enough to jump right into, and it was certainly designed for short bursts of play, but if you mistake accessibility for easiness you'll soon have your head handed to you on the end of a goblin's spear. Battleheart Legacy doesn't take it easy on you. Random encounters can leave you limping, quests can require grinding, and new equipment won't always solve your problems. You have to get good at combat if you want to see more advanced areas, it's that simple. Battleheart is never unfair in its level of challenge, especially since there's a difficulty slider you can adjust to make things easier. But still, it's not the kind of game you can just shut your eyes and run straight through.

Battleheart's replay value is extremely high. Not only do some quests have multiple paths you can choose, but the way skills are handled opens up a wide variety of combat styles to indulge yourself in. Since level grinding is part of the game, you'll find that battles never really get old. Combat is fluid and easy to interact with, leaving you satisfied after each encounter, even if you don't get a lot of gold or loot.

Like we said above, Battleheart Legacy has much of what Torchlight or Diablo fans would want out of a pick-up-and-play mobile RPG. It's heavy on the combat, heavy on the quests, and heavy on the raw entertainment value.

And is there any scent on the wind of an android release?

Yes, this is by the same developers and intended to be a "reimagining" of Battleheart. :) As for Android, sadly the devs announced they were dropping support for Android in 2012 since it wasn't financially viable, so while you might eventually see an Android release somewhere in the far-off future, I wouldn't hold your breath for it any time soon. It looks like they developed it with the intention of it being easier to manage/update if they brought it to Android, so hopefully they make a statement to clear the air for the hopefuls.

Well, this and Third Eye Crime are giving me reasons to budget a new apple device.

It's weird having traditionally gaming-console-based motivations for smart-devices.