Hexage's mobile action RPG Reaper, coming soon to iOS and other devices, is one of those little casual games that just seems to get it. It's easy to pick up whenever you have time, stunning to behold, fast-paced, and, most importantly, fun... the perfect fit for a game that goes in your pocket. Reaper is sort of free, though you can only play to character level ten (which is a good chunk of time) before you have to pay to unlock the rest. $2.99USD gets you the full version, but pay a little more as a one time purchase and you can get extra items, a new game mode, and more quests. You play a lone, miserable swordsman (I don't mean you're unhappy, I mean you're literally an unpleasant person) in a magical world caught between conflict when your sword for hire winds up forcing you into the action. Hack and slash your way through beautiful battles with colourful foes, upgrade your equipment, and more in this easily addictive little game. 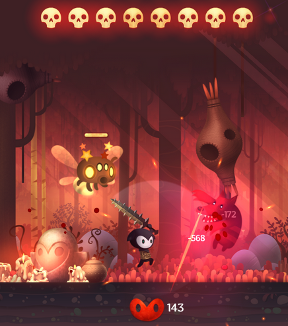 Reaper will walk you through the controls when you start, but they're fairly simple. Tapping on the far left side of the screen will make Reaper go left, and tapping to the right of that will make him/her go right, while tapping the right side of the screen allows you to jump/double-jump. You'll automatically attack nearby enemies, which generates Rage in the form of skulls at the top of the screen, and you can then execute special attacks with various gestures, such as a forward dash, uppercut, and more. The game does have a story, and even a fairly well-written one with an interesting world at its core. But since it's relegated to tiny text at the bottom of the screen with just as tiny character portraits and nothing more, it's hard to really get that invested in it. Which is fine, because taken purely as a hack-and-slash game, Reaper is a winner too. The controls are a snap, the visuals are gorgeous and the action satisfying to dive into and pull off.

If I had a complaint, it would be that running after the bizarrely bouncy gold is annoying, and it feels like more often enemies simply swarm you with numbers in the beginning rather than anything that would require a specific strategy. It takes a while for Reaper's difficulty to ramp up, and despite its comparatively simple control scheme, it still manages to provide some of the most engaging and climatic battles you'll see in a mobile RPG. This is what mobile gaming should be... the type of game you can pick up for a few minutes whenever you want, and won't want to put down for far longer. Reaper might not have a lot of bells and whistles when it comes to the gameplay, which is all brawling all the time in a way that makes the story feel almost irrelevant, but it's crafted with love and delivers a fun, fast-paced experience that will challenge your reflexes and keep you coming back for more again and again.

You can say what you want, but if you see a game from Hexage you know it is a good game.

I 2nd that comment. Aside from Radiant Defense, Hexage is dominating. Great design, fluid UI, decent plot (complete with dry humor). I hope they keep turning them out. If you like this try Robotek, and of course Radiant.