Not-quite-new from always excellent Japanese designer 58 Works, (#07 ML, Cottage) Escapers #05 Space is a wonderful, uncomplicated shot of pure escape game goodness. Substantive and entertaining yet not too tough, Escapers #05 Space could be the perfect oasis in the middle of your hectic week. 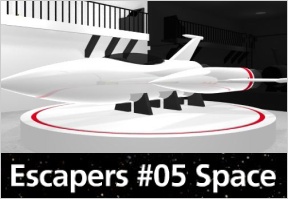 With no explanation, you find yourself aboard what appears to be, judging from the vast starry skies glimpsed through the portholes, a space station. You are locked in a storage room, but getting out of there shouldn't be too difficult; the real challenge comes after you stumble across the very handy but frustratingly underfueled spaceship that offers your only chance of escape. Can you muster your wits to solve the puzzles, fix the ship and find a way back home?

The answer to that question, for those with even a modicum of escape game experience, is probably "yes." Escapers #05 Space is not very difficult; the game only has a handful of puzzles, and the ones it does have can be solved with a minimum of fuss. "Easy", however, does not necessarily imply "not clever." In fact, Escapers #05 Space is an extremely satisfying little game. Everything just fits together so well; each puzzle's clues flow perfectly into its solution, nothing is too esoteric or difficult to understand, and your efforts leads to a satisfying conclusion. What the game lacks in intellectual challenge is more than made up for by the strength of its construction and gratifying sense of logic.

Visually, the game is quite nice, with uncluttered graphics eminently suitable to the environment. Like other games by 58 Works, Escapers #05 Space lacks any sort of soundtrack (which, considering that the game takes place in outer space, is just fine). There's no save feature, which generally I would find deeply annoying, but in a game this short it isn't really a big deal. The inventory is simple and clean, navigating is easy to do and pixel-hunting is near-nonexistent: excellent all around!

Escapers #05 Space is wonderfully refreshing. True, it may not be hugely ambitious either technically or in terms of its puzzles, and it's not quite as sophisticated nor as developed as 58 Works' later creations. Nevertheless, the game is well-constructed, entertaining and breathtakingly logical; the latter quality, in particular, can be very difficult to find in an escape game. If you've been ever been confounded by an escape game's seemingly inexplicable "logic" or spent hours clicking everywhere except a room's one-millimeter-wide hotspot, you're going to relish playing this one. Enjoy!

Zoom! I'm out! This was fairly simple but I had fun. Thanx!

Nice little game. Short, easy, no pixel hunting and no leaps of logic.

Pretty easy! Finished in a flash.

I liked that. Easy enough for me to do without having to even think about looking at a walk through.

Nice, short, and simple. Perhaps too simple. WT not needed.

Loved it. I'd prefer all escape games to be like this one: logical, having a plot, and no pixel-hunting. Great.

I remember playing this awhile ago when I got sucked into 58works' games after playing the Cottage one. I adore their games and wish some escape makers would take a page or two from 58. I just wish I spoke the language so I could play some of their other games.

Fun and really nice-looking layout, too!

grinnyp: So, where is this

of which you speak?

it's the card object on the windowsill

boatshoes: Wow, that hid well. Thanks.

More proof that I either suck at Escape the Room Games, or that I shouldn't play games at 11:00PM.

In the first room I did the colors in the wrong order on the planet projector the first time. Now I can't get the projector to reset so I can't do it at all.

Just hit the buttons in the right order. I don't think you have to reset them after a false try.

Is this part of a series? Like are there Escapers #1-4? Or is it just a random japanese title?

Also, if there are more... are they simple like this one? Sometimes it's fun to throw your brain on "cruise-control" and breeze thru a game.

I loved this game :) Like others have said, simple, but not the horrid brainless type. You do need to think about the puzzles, but it was logical, and there was no need for me to use a walkthrough. I am even more pleased because I feel that my escape game skillz have been improving greatly recently. :)

There are seven games on the site, but several of them are in Japanese. The cottage one is pretty easy.

Oh yay! Short and easy but very nice! A confidence-booster. ;)

Finally ! An escape game I finished myself, without any help at all. I can't remember the last one. I agree with what everyone else wrote: the puzzles make sense; laws of physics aren't violated; you always have an idea of something to look for that might help.

I wonder if the author(s) of this one can get together with someone else and make an escape game that's harder but still logical.

Great game, but it was too easy - i still needed a walkthrough twice, but i rush these games and was just checking what the gold key was for.

I little bit more difficulty/length would have made it awesome

Pesky, check out https://jayisgames.com/tag/58works; this will show you all the games by 58 works reviewed by JIG. Most, especially #07 ML, are lengthier and more difficult than this one. Enjoy!

Oh wow, this is the first escape the room game I have not needed a walkthrough for (except the planet rings part)

Wow, that was VERY easy. Didn't get stuck even a little. But a decent length and really fun, nonetheless. ^_^

put the gas cap on.

Just a bit short and easy, but enjoyable none the less.

Very enjoyable for me! Short and sweet but very logical and refreshing. Thank you 58 Works!

Great game. Quite simple compared to some of the others but very logical and great fun to play in a short space of time.