Phuket (poo-kèt) is a lovely, tropical oceanside town in Thailand, a place where the azure waters of the Pacific lap ashore soft sand beaches. At night, the city lights look like a cascade of sparkles rolling down Phuket mountain. There's even some familiar faces waiting to serve up a tasty burger to you when all the sightseeing and nightlife leave you hungry. Sounds alluring, doesn't it? You could endure the hassle of airports and the expense of traveling, or you can let Cabeza take you there and all you have to do is Escape! In Phuket. 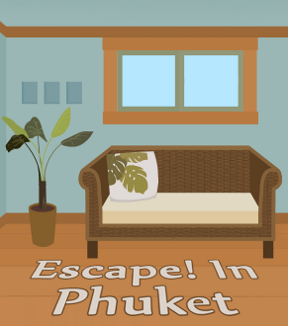 After a brief and blissfully comfortable plane ride across the game screen, the first thing you'll notice about this vacation-themed escape-the-room game is its appealing design in an attractive color palate of turquoise and summery wicker. Navigation is made straight forward with bright arrows and a clean layout means you're not searching for that one special pixel to reap needed clues or items. This leads to a relaxing and peaceful sojourn, where you need only to point and click around, putting items to logical use and noting the clues that are revealed. About five or ten minutes later, you'll have the exit key in hand and a smile of satisfaction to go with it.

This vacation abode has just two tiny rooms with just a handful of codes to solve, but Escape! In Phuket will be appreciated especially by players who want pleasant surroundings as much as affability and logical puzzles in their gameplay. While it is a disappointment to not have more walls to look at or more puzzles to solve, you are well rewarded for your efforts with a fun souvenir: a slide show of places visited in Phuket to prompt the vacation memories, telling the story behind the pictures. A minibreak to Thailand in a free online game? That'll swipe the smug grin off certain red-hatted gnomes.

Use the transparency paper on the words "Tom yum goong" to reveal a five digit number.

-Remember- take back the transparency sheet; you may need it again.

Check the clock on the wall, ignoring the fancy designs, and you get the time...

When you use the transparency on "Tom yum goong" in the book, certain parts of the letters turn red to reveal a number. This is the code...

Use the NAPKIN to wipe off part of the "name display" on the wall. You'll end up with the Thai words, "Nam Pla," which is a tasty fish sauce.

Use the TRANSPARENCY SHEET on the computer monitor and you'll see a pattern:

In this case, "ON" means the buttons you push on the box.

Enjoy your escape to Phuket, Thailand!

Ah, so THAT'S how you pronounce that town's name...I always came up with something a bit closer to what usually slips out of my mouth just before a ragequit.

Use the transparency paper on the words "Tom yum goong" to reveal a five digit number.

-Remember- take back the transparency sheet; you may need it again.

Check the clock on the wall, ignoring the fancy designs, and you get the time...

When you use the transparency on "Tom yum goong" in the book, certain parts of the letters turn red to reveal a number. This is the code...

Use the NAPKIN to wipe off part of the "name display" on the wall. You'll end up with the Thai words, "Nam Pla," which is a tasty fish sauce.

Use the TRANSPARENCY SHEET on the computer monitor and you'll see a pattern:

In this case, "ON" means the buttons you push on the box.

Enjoy your escape to Phuket, Thailand!

puzzle box. Never saw the thumb drive. I just happened to put the boxes in the wall in the right order.

There's a save button but I didn't see one to load. Partway through my first attempt the game stopped working properly - couldn't click arrows or zoom in on areas like the clock any more - so I had to reload the page. I saved it so I wouldn't have to redo everything but when I refreshed the page there didn't seem to be any way to load the game.

Other than that the game seemed short and bland.

Hmm. I played it several times without trouble in both Firefox and Chrome and tested the save button. Upon reloading, a "load" option appears next to the start button. Did you save after the page wasn't responding to clicks? Maybe there was a problem where Flash stopped working?

Edit: Playing again in Chrome, I notice it doesn't run as smoothly as it did on Firefox. So if you're still experiencing trouble, maybe try a different browser?

Playing it on a different browser wouldn't currently be an option, but I finished the game already any way - I just had to start over. Given how short the game is, starting over was just a minor annoyance - less bothersome than the game glitching in the first place.

Not the usual quality escape game I'm used to from JIG

The curry boxes puzzle works no matter how you solve it, so the computer puzzle is bugged out of necessity.

That's odd, the boxes only work for me if I put them in the correct order.

Apologies to those who are having troubles with the game. I really liked this one myself but I'll aim for something different next time. ;-)

Hi Cabbit! I'm sorry you had problems with the game. Can you clarify what you mean? None of us encountered anything like that!

Hey, I enjoyed it. Nice that there's no guesswork as to which code goes to which form, and you could do stuff like

It wasn't original in a puzzle sense, but it was an original setting and theme.

That was relatively easy, but nicely designed and fun. I especially enjoyed the use of Thai numerals (which I believe were used correctly).

I too got out without using the puzzle box, the computer, or the USB. All I did was

put the curry boxes in the wall in random orders until the numbers showed up, typed them into the grey box, and from the grey box I got the key...so I unlocked the door with the key and that was it.

Not the best designed escape game I ever played, but I'm bored, so Phuket.

not veg friendl. poor shrimp had to be killed