Emma and the Inventor

Emma and the Inventor is a wonder-filled adventure/hidden object game from Tricky Software. A relative newcomer to the casual downloads scene, the studio makes a great impression with a game that is not only easy and inviting to play, but one that has been carefully put together with attention to the small details. The end result doesn't shatter records or break the genre's mold too fiercely, but instead delivers a supremely satisfying game with good puzzles, excellent artwork and music, and frustration-free gameplay scene after glorious scene. Emma's excited because she gets to visit her eccentric grandfather who has a house out in the country. When she arrives, he doesn't seem to be there, and after a bit of investigation, she discovers he's been up to his old mad scientist-like inventing tricks again! This time, Grandpa Jenkins has constructed a magnificent machine that, unfortunately, went haywire and scattered itself in pieces. Not only that, but grandpa was sent to some sort of nether dimension and is now reliant upon Emma to rescue him.

Don't let the canned storyline fool you, as Emma and the Inventor is packed with charm, and once you start playing you really won't mind the predictable plot. The game is built on an adventure core with inventory items and puzzle solving holding up the backbone of the experience. In order to move from scene to scene, you'll need to unlock doors, move past gates, and gain access to hidden areas by solving puzzles using items you find scattered here and there.

You'll also find pieces of items throughout your journey. Sometimes they'll make sense, sometimes they'll make you wonder, and other times they're there just to complete a larger item you'll use later. Emma and the Inventor has one of the best-looking inventory systems in any casual game, featuring a classic typewriter-style lever that swaps trays to show you three categories of items. Not only does this allow you to keep less-frequently-used objects out of the way, it's an extremely satisfying mechanic to play around with! 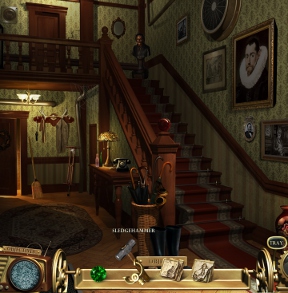 On occasion, you'll be entertained to a hidden object scene or short mini-game. Neither are too difficult, and even if you're not an object finding nut you'll have a good time picking out items in the short hidden object scenes. Mini-games are fairly standard with a selection of picture puzzles and the like, but again, the difficulty isn't too high, so even if you're feeling grumpy about solving a jigsaw puzzle, two minutes later you'll be staring at the victory screen.

Analysis: Emma and the Inventor is a quiet sort of game that could easily slip under anyone's radar. Don't let it, though, as you're in for an engaging experience that cautiously gets everything right in a hidden object adventure release. Tricky Software didn't take too many chances with the game's design, but it never feels formulaic or derivative in nature. Just simple, charmingly simple.

The visuals are superb, with warm fall-like colors and a steampunk design aesthetic around every corner. These machines never feel cold and distant, though, and you really feel like you're staring at the world through Emma's somewhat innocent eyes, curious at every contraption you see and always wondering what strange thing grandpa has in store for you next.

Ready for the game's only shortcoming? Length. As with what seems like every hidden object game released in the last few years, Emma and the Inventor aims for only a few hours of entertainment. It's a good ride while it lasts, of course, but two to three hours is barely enough to feel like you've gotten started, let alone played a game from start to finish.

A small release from a studio not everybody has heard of doesn't necessarily spell success, but in the case of Emma and the Inventor, you should dive right in without hesitation. It's easily one of the most charming and satisfying hidden object adventure games on the market.

I know that Hidden Object games tend to come in on the easy side, but this one is SO easy that it's clearly aimed at kids.

I played through the demo and didn't encounter a single of the "puzzles" you mention. In every single case you are told exactly the item needed to perform whatever task. Even by the hand-holding conventions of the genre, it was excessive.

Also, the HO scenes definitely aren't "on occasion," but really quite frequent.

It's a lovely looking game with smooth navigation, but definitely not for grown-ups.